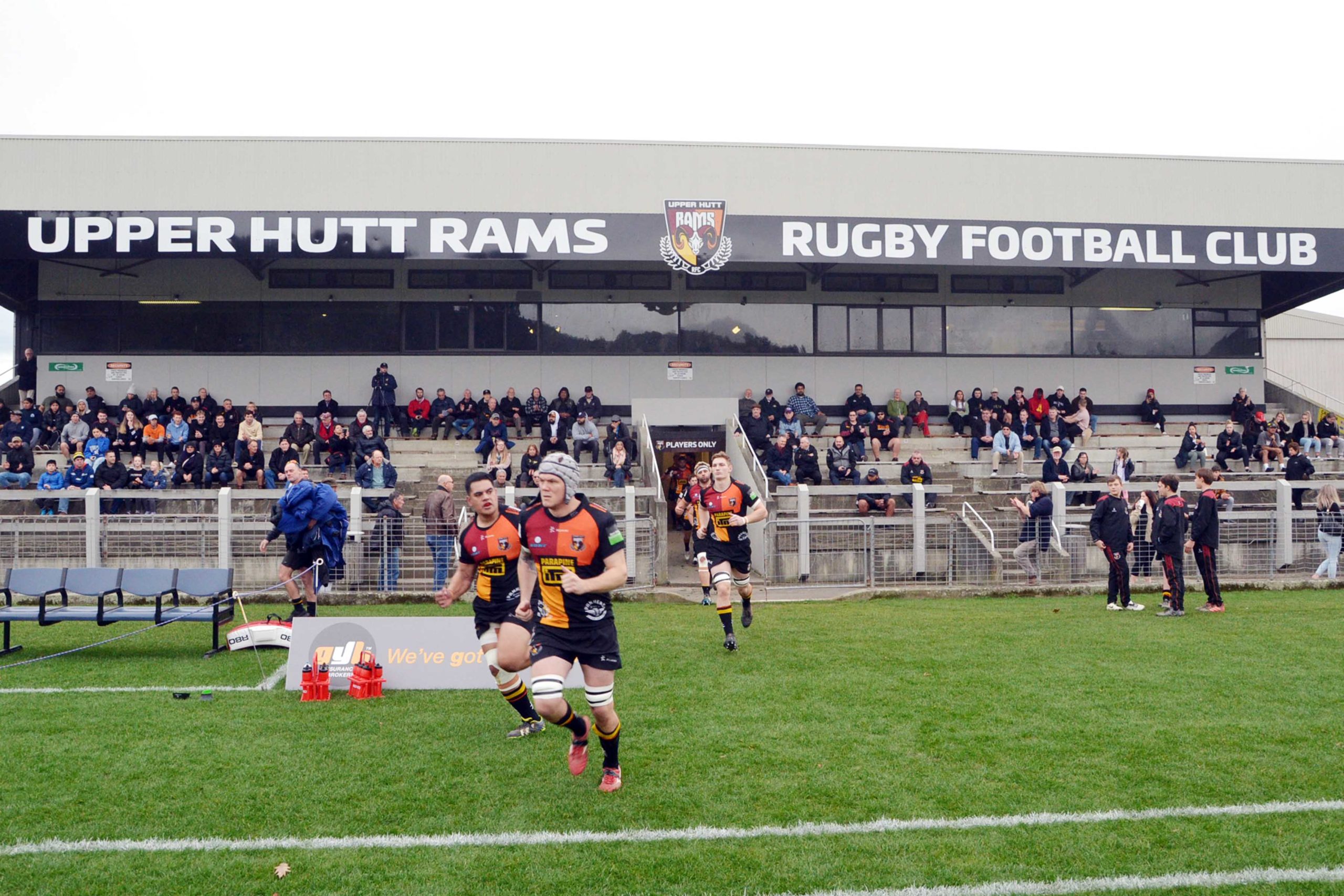 Above: The Upper Hutt Rams run out on to their newly re-laid surface at Maidstone Park on Saturday against Marist St Pat’s. The Rams and Tawa (see below) were both playing on newly minted home grounds on Saturday for the first time. PHOTO: Peter McDonald.

Another round of rugby in the can, leaving four teams of 14 unbeaten after two weekends of the 2020 Swindale Shield. The good news is its just five more sleeps before it starts again. Third round matches are HERE

The brightest boots of the day award on Saturday went to Tawa and Wellington Lions fullback Trent Renata, whose fluorescent yellow footwear made him hard to miss from the sideline. Renata was one of Tawa’s first three try-scorers in the opening 15 minutes as they leapt to a match-winning 19-0 lead.

The Tawa Premier Reserves beat their Avalon Wolves counterparts 43-5 in the Lyndhurst curtain-raiser. A big cheer for their final try of the afternoon scored by the Tokeleuan Torpedo.

This was the home team’s first run on the recently re-laid Lyndhurst Park surface. In the past its been a mud-bath in parts this time of the year, and some of the home club’s former backs in attendance such as Pepesana Patafilo (waterboy), Steve So’oialo (coaching staff) and Shaun Treeby (spectator) would have no doubt relished playing on it.

An apparent bunfight at Hataitai Park on Saturday in the Colts grade, with the Wellington Axemen Colts recorded as having beaten their HOBM counterparts 7-0. However, there was a recording error in the results app and it was later revealed that the junior Eagles had won 84-7.

Good to see some old school rugby values being maintained on Saturday afternoon, with Marist St Pats’ second side venturing in en masse to Stokes Valley’s clubrooms for post-game hospitality. Here’s hoping that the remaining teams to visit Delaney Park this season follow in the same suite.

Ories scored eight tries in their 54-0 Premier Women’s win over HOBM on Saturday, but unusually Ayesha Leti-l’iga wasn’t amongst them even if she did start on the bench. It was the first game in which she played and didn’t score since the 2018 championship final loss to Norths and only the second time in four years.

Instead the player scoring all the tries this weekend was Petone’s Milly Mackey, with the halfback scoring five of her side’s nine tries in their 55-17 win over Poneke, and added three conversions for a personal haul of 31 points.

A pair of interesting faces in Avalon’s Women’s side on Saturday. Caroline Sio, who has played for North Harbour in the Farah Palmer Cup the past two years turned out for her old club, and joined by former Feilding High star and Manawatu player Lauren Balsillie who scored two tries (to go with her two tries last week) and kicked three conversions.

Kaliopasi Uluilakepa was a late withdrawal from Petone’s line-up on Saturday owing to the passing of his grandfather. We at Short Passes wish him the best.

Wonderful to hear Darren Larsen talk so proudly about his trophy contested for in the match between Wainuiomata and Petone. A trophy adds greater character history and meaning to a fixture. What about Scots putting up the Ashley Bloomfield Cup for a fixture. He was a Head Prefect and First XV member while at school and is a great servant of his country. Similarly, when Rongotai College plays Nelson College in their annual traditional fixture should the Graham Williams/Bill Clark trophy be at stake. Both men were legendary All Black flankers that attended the respective colleges.

Some tough news out of Wellington Rugby with the confirmation of job losses in the Community Rugby team. Long-serving Head of Community Rugby Will Caccia-Birch and administrator Tammy Ferreira as well as Development Managers Mason Malagamaali’i and Fuamai Moeka all finished up on Friday. Club Rugby wishes all four good luck in their next endeavours .

Tragically the Hutt Valley High School First XV defaulted their premier grading fixture on Saturday against Kapiti College after they could only assemble 13 players for the match. HVHS is the biggest school in Lower Hutt with a considerable rugby history and some very decent people involved in their programme. With such apathy among our youth is it time to combine schools like they do in Canterbury? A Hutt United XV made up of the best players from the coeds would be really useful. A similar side in Porirua would be pretty powerful? That’s not to say disband the school First XV. They need to retain the integrity of their traditions and could play midweek fixtures (like the Beard Trophy), but for the sake of the quality and competition in the Premiership grade are mergers on the table in the future?

Great that a number of Hurricanes players were out fronting for club teams on Saturday, but given that they already had one out-of-town player in Jonathan Taumateine, did MSP really need Fletcher Smith as well? Would Wellington, Johnsonville, Pare-Plimmerton, Avalon, or even their opponents on Saturday in Upper Hutt have benefited more? Similarly, were there a few Hurricanes who could have benefited from a run in club rugby? Asafo Aumua is one who springs to mind who could have joined his brothers Sefo and Chris on Lyndhurst Park. Vaea Fifita another player who would have boosted the Axemen.

But speaking of top-level players, how good was this sight?

Felt good to be playing club footy with the @oriesrugby brothers, especially the new usos putting the jersey on for the first time. Been too long??? #AbsShouldPlayClubFooty #Blessed

A lot of hype around Blues loose forward Hoskins Sotutu. He’s eligible for Fiji, England, and New Zealand. What about the Olympic Sevens in 2021? You can imagine Hoskins being useful in the forwards in sevens? Will New Zealand put together the strongest possible time. A gold medal if the Olympics happen would do wonders for NZR coffers?

The Crusaders are unbeaten at home for 32 consecutive Super Rugby matches stretching back to Round 17, 2016.

The Hurricanes have bolstered the depth of their forward pack, signing Devan Flanders and Tevita Mafileo until 2022.

For 22-year-old prop, Mafileo, this will be his first fulltime contract with a Super Rugby team.

Moving to Bay of Plenty after High School to join the academy there, Mafileo impressed as a regional and national under-20 representative during 2018.

Meanwhile, 20-year-old flanker, Flanders made his debut against the Stormers in Cape Town this year.

Since then, he’s been called up to the Hurricanes squad six times and says he can’t wait to get more experience at the Investec Super Rugby level.

There was a classic comeback win in Manawatu club rugby on Saturday. Trailing 5-26 at the halftime break, Old Boys Marist came storming back to beat College Old Boys 27-26.

Magpies pivot Tiaan Falcon was key in helping his Clive side beat Central 15-12 in another late come-from-behind win, this time in Hawke’s Bay club rugby.

Good to have a run around on the footy field yesterday. The boys got the job done 22-20 in a real good battle. Roll on next week ??? pic.twitter.com/8ycMNP4VXc

Congratulations to OBU’s Sam Reid (below) who became the second Goat in as many weeks to reach the 50 game milestone, and to Tawa’s Tom Maiava (video clip below) who starred in his blazer game. Keep an eye out for this week’s preview, with two players potentially in line to bring up a century for their respective clubs.

A comprehensive 58-10 win for the @tawarugby1 Premiers over the @avalonwolvesrfc Premiers in round 2 of the #swindaleshield2020 A couple of clips from that game here.

Last week (24 June) was the 25th anniversary of the 1995 Rugby World Cup final that saw the Springboks beat the All Blacks 15-12 and win their title for the first time.

Despite all the political turmoil in South Africa, and within South African rugby itself, has there been a more successful institution post-apartheid than the Springboks? Winners of two World Cups since 1996 only the All Blacks with 247 victories have won more tests (184) than South Africa in the professional era. In the 2019 World Cup final there were 11 black players in the squad, six of whom were in the starting XV, including captain Siya Kolisi.

Springbok flanker Ruben Kruger was denied a try in that 1995 final that referee Ed Morrison later admitted was a try.

It’s alleged that Jonah Lomu slept in a car two days before the final after breaking team protocol to see his girlfriend and later first-wife Tanya Rutter.

It’s alleged after South Africa won the final Kobus Wiese was chanting “Lomu is gay.” Ironically Hannes Strydom, the locking partner of Wiese, came out as a homosexual.

Jones and colleague Stuart Barnes have been ranking their top 10 players in each position in a series published in The Times.

The Pauatahanui farmer cut short his test career by refusing to tour South Africa in 1970 due to his opposition to apartheid.

Please send news and information or notices for this Monday column to editor@clubrugby.co.nz

Bob was a flying winger in the Hutt Premier side in the mid 60’s and following our merger with HSOB in 1967, with the Hutt Old Boys Premier side until the early 70’s.  Bob was a tall individual with a unique running style (which contributed to his nicknames of ‘Nancy’ and ‘Lolly Legs’) but proved to be a good finisher and scored some lovely tries on his beloved Hutt Rec.

He was well-known in the Valley having earned his living as a real estate agent for many years.

Aisle be Back: The Silver Lake deal vote and Canes v Chiefs tonight