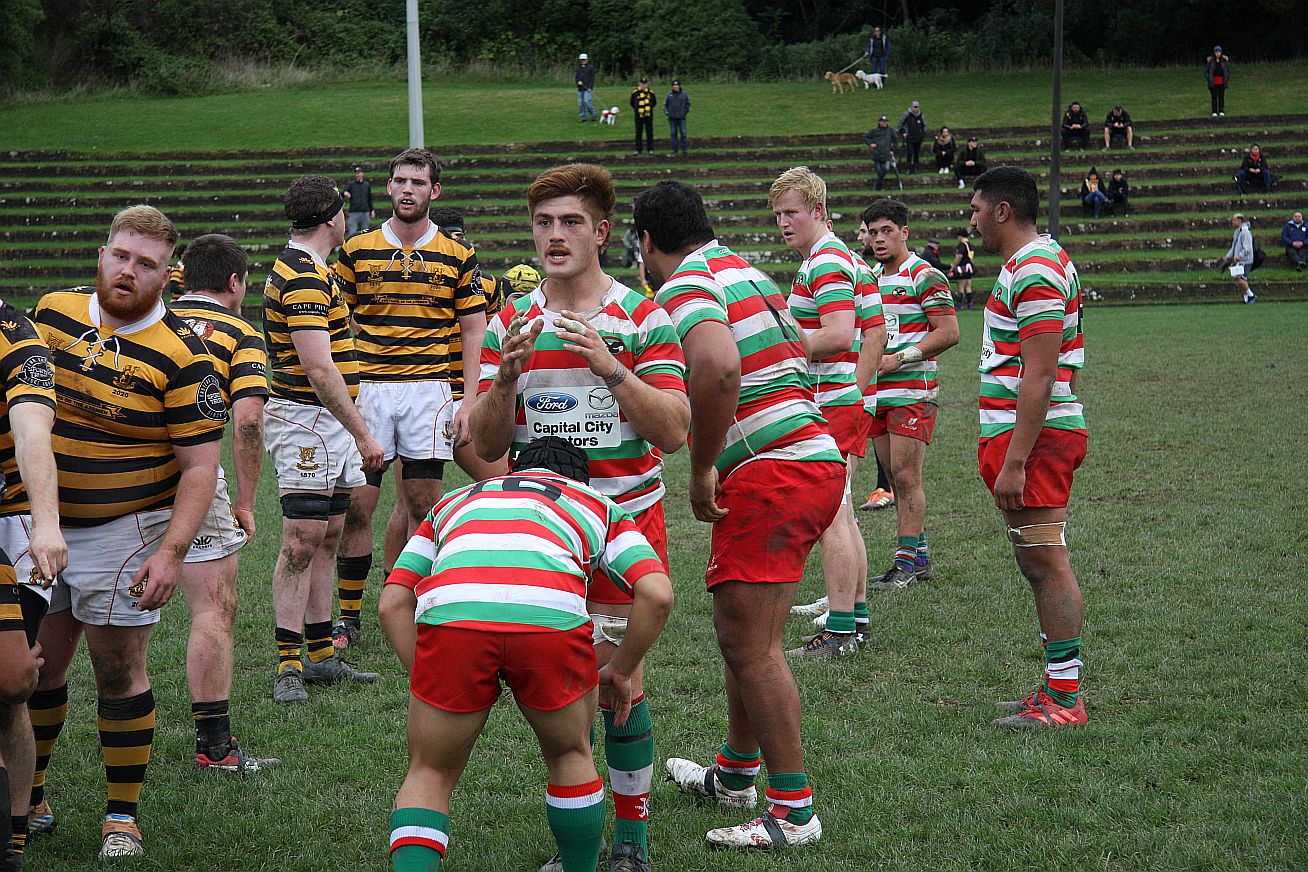 The Wellington Axemen lost at home to the HOBM Eagles on Saturday. PHOTO: Warwick Burke.

Wainuiomata retained the Darren Larsen Cup for a tenth consecutive year with an extraordinary 28-23 victory over Petone in today’s second round of Swindale Shield matches. With three minutes remaining, Petone, having trailed most of the match, leveled the scores when second-five Tom Carter scored close to the posts after a series of swift offloads and robust carries by the forwards.

Wainuiomata first-five Ruben Love re-started an almost resigned kick that rolled into the Petone deal ball area. Waiting for the ball to roll dead was a pair of Petone defenders whose hesitation was unfortunate. Chasing earnestly, Wainuiomata reserve Trei Mu lunged at the ball and forced it down for one of the most dramatic tries ever seen at William Jones Park. With the scoreboard clock showing 43:00 Petone regained the kick-off but lost the ball after half a dozen phases, 35-metres out from the line.

Earlier, the first-half was dominated by the whistle. After penalties were exchanged, Wainuiomata was quicker to adapt to the slower pace gaining an ascendancy at the set-piece and scoring two tries, both to lock Tutasi Masoe. The first was from a botched Petone lineout where Masoe gathered a spillage and galloped 25-meters and the second a similar finish after good phase play. Crucially the hosts’ first try was scored while Peter Umaga-Jensen was in the sin-bin for an illegal tackle.

Petone first-five Carne Green found a hole and scored a try to close the gap to 17-10 at halftime. Tyler Tane was able to extend Wainuiomata’s advantage to 20-10, but the Petone reserves added some punch and claim and two Green penalties reduced the deficit to 20-16. With six minutes left Tane was on target from 35-meters out at which point the result seemed settled, but in 2020 is anything ever mundane anymore?

Masoe was the man of the match. In addition to his two tries, he was abrasive in contact and effective in the lineouts. All three Wainuiomata loose forwards, but especially Sam Smith on defence and Teru Time carrying, were outstanding. Love appears to be real quality and Jordan King is a worthy addition at halfback. For Petone, Dylan Williamson is always honest, Tom Cater grew in stature and Josh Southall and Vern Sosefo added punch from the bench.

In the second round of the Premier Swindale Shield, played in fair, mild conditions across the region, the other six matches were less dramatic but still exciting.

At Nairnville Park, Old Boys University made it two from two at home to start the competition whilst inflicting a second straight defeat on last year’s Jubilee Cup champions Northern United. OBU beat Norths 33-16 to retain the Bill Brien Challenge Cup and win the interclub Ken Douglas Trophy off them.

OBU scored just three tries, but the boot of first five-eighth Dale Sabbagh proved telling for the home side. Sabbagh kicked all three conversions and four penalties for 18 points.

OBU are unbeaten after the opening fortnight by Marist St Pat’s,  Tawa and Hutt Old Boys Marist, who all had bonus point wins today.

MSP were 61-11 winners over the Upper Hutt Rams at Maidstone Park in a match that was close throughout the first half and the Rams trailed just 11-12 at one point before MSP launched a second half supernova to pull clear and win comfortably. Centre Isaia Petelo,  wing Billy Proctor and halfback Jonathan Taumateine all scored braces in the win

Tawa laid on seven first half tries in leading 41-3 at the turnaround, en route to beating the Avalon Wolves 58-10. Tawa scorched out of the blocks, opening Avalon’s defences up early and maintaining the pressure in a clinical first half of rugby. The Wolves rallied in the second spell and were much more competitive and their late consolation try in the terraces corner of Lyndhurst was good consolation for a result that could have been much worse for them.

With All Black Ardie Savea at No. 8, visitors and a dry day for the young backs to shine Paremata-Plimmerton were always going to be up against it against Oriental-Rongotai at the Polo Grounds. Ories won 49-10, but it was tight for much of the contest and Ories scores a flurry of late tries to seal the deal. Savea himself got on the scoresheet, one of seven different scorers for the Magpies.

Probably the closest Swindale Shield match of the day was at Helston Park where visitors Poneke beat Johnsonville 18-11.  Poneke out scored the Hawks three tries to one, with centre Psalms Latu bagging a brace and wing Suitulaga Taulogo scoring their other try.

Oriental-Rongotai racked up their second consecutive 54-0 win in the Premier Women’s Rebecca Liua’ana Trophy, this time against Hutt Old Boys Marist. Petone made their season bow, beating a plucky Poneke 55-17, with halfback Milly Mackey scoring five tries, while next door Marist St Pat’s grabbed their first win of the year 46-24 over Pare-Plimmerton.

Joining Ories with two wins at the table are Avalon who beat the OBU Impalas 31-28 in a nail-biter in the Ian Galloway Cage. Nil-all for most of the first half, it was the Wolves who broke the deadlock to lead 7-0 at the break. The second half was a very different affair as Avalon leapt out to a 31-7 lead, before the Impala’s launched a furious comeback as Avalon finished the game with just six fit forwards that came up just short. Centre Thamsyn Newton scored a hat-trick for OBU.

The second round of the Premier Reserve Harper Lock Shield largely fell with expectations with a number of big margins and one nailbiter. The latter was at Helston Park where Poneke managed to go 2-from-2, but not without being pushed hard by Johnsonville before prevailing 31-25. Also keeping their records perfect were Norths, Ories, Petone A, Tawa, and MSP. Norths beat OBU 57-29, Ories accounted for Pare-Plim 36-10, Petone beat Wainuiomata 48-18, and Tawa saw off Avalon 48-7, while HOBM got on the board with a 67-8 win over Petone B.

The sole late kickoff was at Delaney Park where MSP, bolstered by several Premier players including near-centurion Andrew Wells, ran out 72-7 winners over Stokes Valley though the scoreline didnt reflect the physicality or the homes sides effort. MSP led 22-0 at the break scoring all tries out wide, before cutting loose in the second half as the home side fell away. That said they have some very handy players, with openside Pasia Asiata particularly impressive

The opening weekend of the Colts Paris Memorial Trophy competition saw a draw, three close wins and a thrashing from the five games played around the region.

The draw was at Ian Galloway Park between the defending champions OBU Green side and Norths Blue. The two teams ended in a 26-26 stalemate, both scoring four tries and taking 3 points from the game.

Poneke and Petone were first round bonus point winners, Poneke beating the Johnsonville Hawks Colts 28-17 and Petone accounting for Wainuiomata 83-0,scoring 13 tries and kicking nine conversions after leading 43-0 at halftime.

A sixth match between the Upper Hutt Rams Colts and MSP was cancelled on Friday, with MSP withdrawing their team from this grade late last week. Norths’ second ‘White’ team had the first round bye.

A couple of eyebrow-raising results in today’s college action. In the Top 4 round-robin St Pats Town sent out a warning beating Scots 29-10, while nearby Silverstream blanked Rongotai with a 36-0 win.

Wellington College and St Bernard’s became the first teams to join those four in this years Premiership. College defeated Hutt International 45-15, while Bernard’s were too strong at home with a 24-0 win over Wairarapa College. HIBS and Wairarapa get a second chance next week in the qualifiers, joining Mana who were 24-19 winners over Upper Hutt, Paraparaumu who thumped Onslow 62-0, Aotea who beat neighbours Viard 49-7, and Tawa who overcame Wainuiomata 37-17. Also joining them are Porirua and Kapiti who had wins by default.