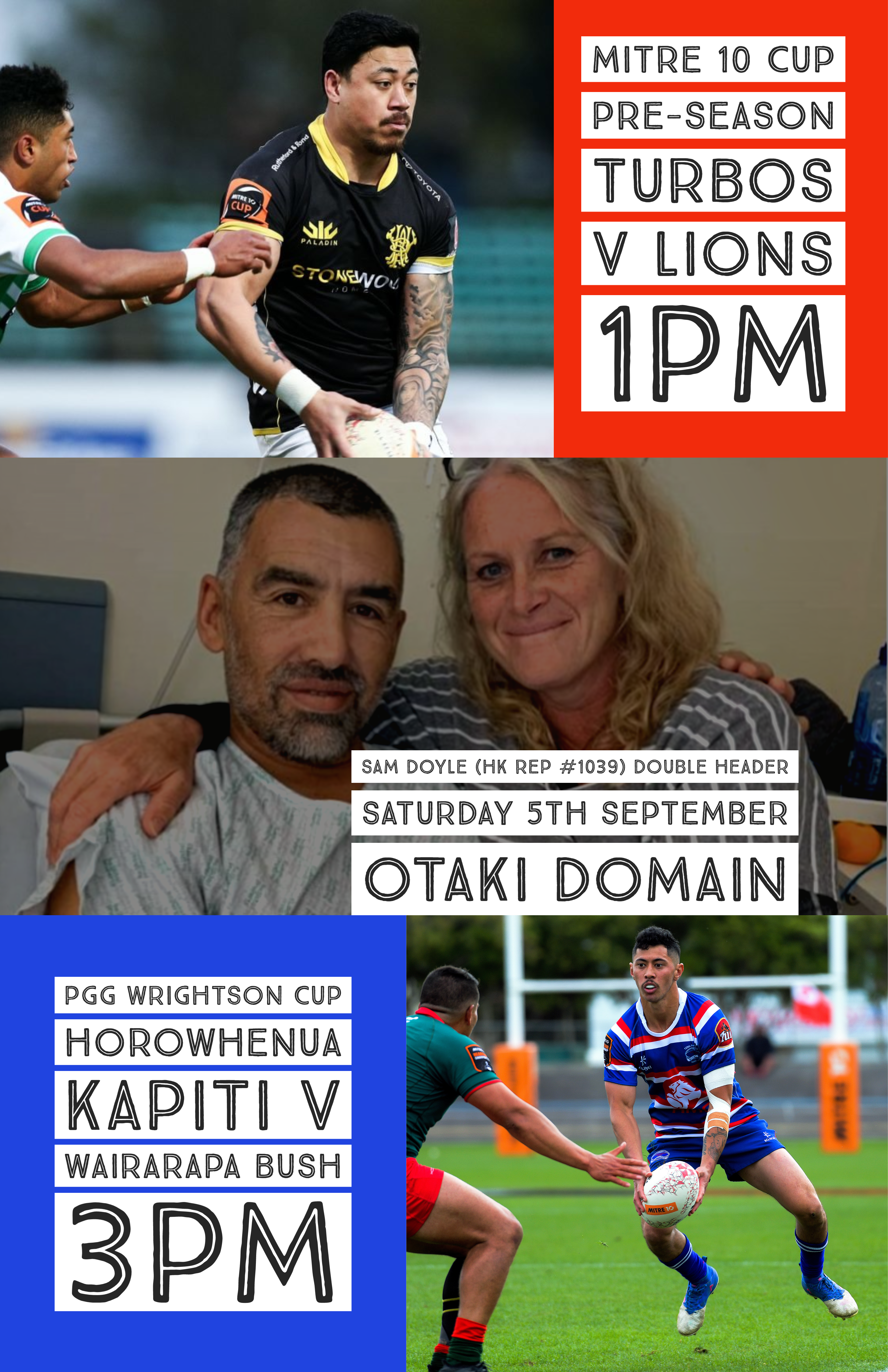 Ōtaki Domain will be packed out for Sam’s Day on September 5th when Manawatū Turbos play Wellington Lions in a Mitre 10 Cup pre-season game and Horowhenua Kapiti take on Wairarapa Bush as a fundraiser for Sam Doyle.

Three of the four teams in action once had Sam Doyle running around in their colours. Sam Doyle (Horowhenua Kapiti representative #1039) was recently diagnosed with acute myeloid leukaemia, a type of cancer that affects the bone marrow and blood.

Makaore Beavan Wilson, Rahui Football and Sports Club Club Captain said, “Sam Doyle is a huge part of the Rāhui and Ōtaki community. He has been a loyal club member since he was young, and he is one of our most successful and respected representatives. Over the years, Sam donned the red and blue for our premier side in 2003, 2007, 2011 and 2012. He also coached 1st XV rugby in the community and has been our Premier Coach for the last two years. We are proud to have Sam as a leader within our club, and Rāhui will support him and his whānau 110%. We would also like to acknowledge the tautoko/support of the HKRFU, WRFU, and MRU for this event, it is greatly appreciated. Nei rā ngā mihi nui ki a koutou.”

“From our point of view, we are very excited to be involved in the fixture, to be supporting the cause for Sam, and to continue the great relationship we have with Horowhenua Kapiti. Our two teams have had some very close and exciting games over the past two years, and this promises to be the same,” O’Gorman said.

“We thought a fantastic way of showing our support for Sam was to organise a day for him involving all three provincial Unions that he represented. It made perfect sense to have the day at Ōtaki Domain, his home ground. Sam has been a huge part of our rugby community for a number of years and we’re really looking forward to a great day in Ōtaki. With Sam playing for Manawatū, Wellington and Horowhenua Kapiti among many other teams, this will be a special day for Sam, his whānau, and the Ōtaki community,” said Horowhenua Kapiti Rugby Football Union Chief Executive Officer, Corey Kennett.

“I’d like to thank Rahui RFC and all the teams involved,” Kennett said.

The Mitre 10 Cup pre-season game is a week out from the start of the Mitre 10 Cup and both the Turbos and Lions will be looking for momentum heading into their campaigns.

Manawatū Rugby Union Chief Executive Shannon Paku feels honoured to be part of the day. “Manawatū Rugby are grateful to be able to play a part in helping Sam, Tracey and the whānau through these challenging times. As a Hato Pāora College old boy, Freyberg RFC and Manawatū Rugby rep at various levels, Sam will always be part of our Manawatū Rugby community. While representing Manawatū he was selected in the NZ Colts, NZ Divisional Team & the NZ Maori All Blacks.

The Turbos are honoured to be playing the curtain raiser for Sams’ Day in his home town of Ōtaki. We wish him all the best with his battle and recovery.”

Sam played four seasons with Wellington and managed to attain 30 caps for the Lions during that time. Sam has been a great servant of not only Wellington Rugby but rugby as a whole and we wish him all the best during these tough times.”

The Wellington Lions v Manawatū Turbos game kicks-off at 1pm
and the Horowhenua Kapiti v Wairarapa Bush fixture for the PGG Wrightson Cup is set for a 3pm kick-off.

Pride starting NPC season back in Premiership ranks on Saturday