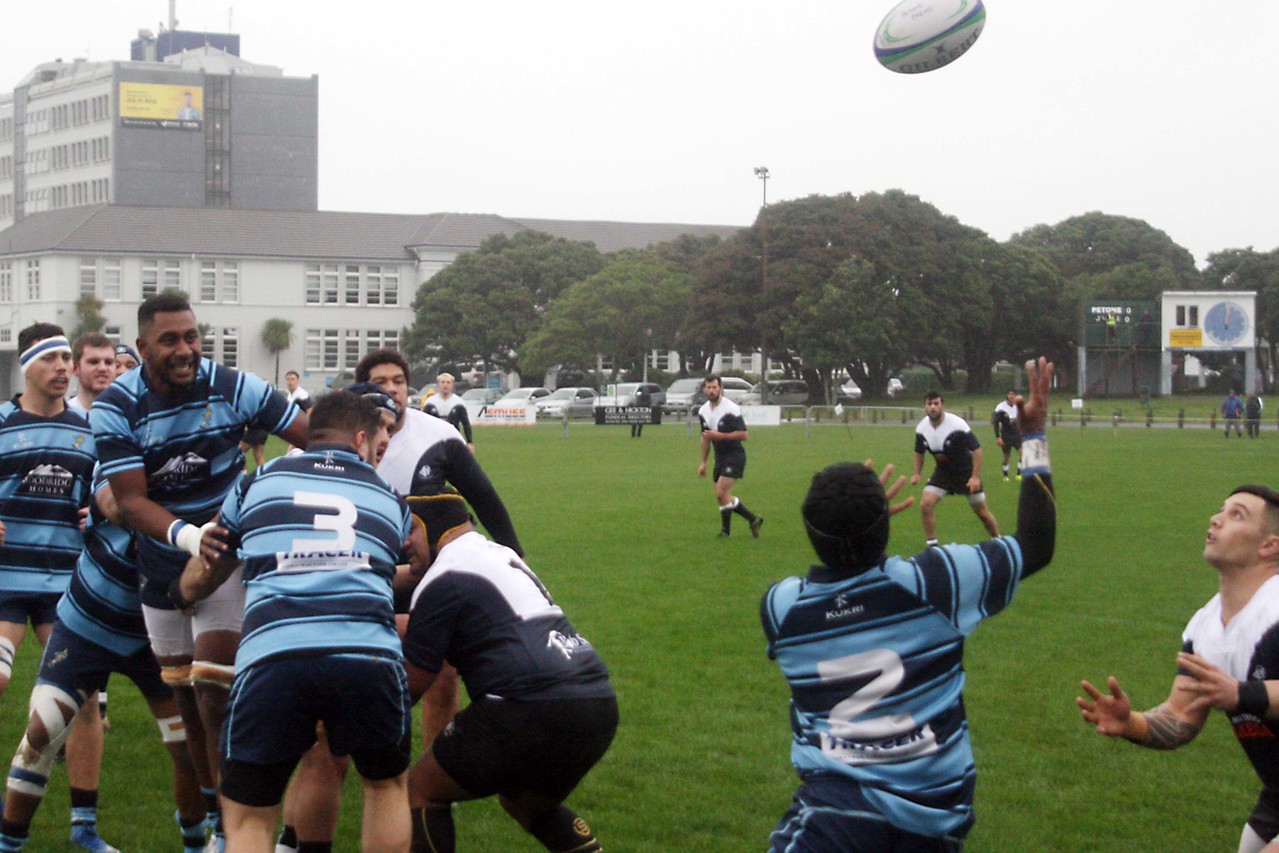 Above. Petone secured a bonus point win over Johnsonville last week. They head over the hill to play Wainuiomata tomorrow, while Johnsonville hosts Poneke at Helston Park. Photo: Peter McDonald.

UPDATED: With the cobwebs blown out and better weather forecast, the second weekend of club rugby should provide plenty in the way of entertainment.

After last week’s slate, this weekend’s one seems almost devoid of high-profile match-ups, but what is of interest is that with the Hurricanes having the bye in Super Rugby Aotearoa this week, a number of their squad will be getting game time.

The match-up that does stand out however is at Nairnville Park, where Old Boys-University take on Northern United in a meeting of the most recent Jubilee Cup winners. The Goats were able to use their physical size to their advantage against Poneke last weekend and bully them up front but it’s unlikely they’ll be able to do it to the same effect tomorrow, though conditions should allow their backs a little more freedom. They make just the one personnel change, with Callum Harkin coming into the midfield where he’ll be joined by Sam Reid in his 50th and Olly Polsen switching to fullback. Norths though will be looking to rebound from a very flat performance against MSP and unsurprisingly coach Gerard Fa’asavalu has rung the changes. In come Jerome Va’ai, Leni Apisai, Mellenniumma Leota, and Antony Fox into the forwards with Bruce Kauika-Petersen moving to openside; and Jayden McCarthy and Losi Filipo into the backs with livewire Esi Komaisavai moving to halfback.

Two trophies are at stake; one is the Bill Brien Challenge Trophy that OBU retained last week while the other is their inter-club Ken Douglas Trophy. Named for the longtime trade unionist who played for Wellington College OB and later was instrumental in the merger of Porirua and Titahi Bay, it is held by Norths after their last-minute 30-25 win courtesy of a Komaisavai intercept try.

There’s two match-ups between sides that took home the win last Saturday. One of those is at Maidstone Park, where the Upper Hutt Rams finally return to after the venue’s lengthy renovation and buoyed by having beaten Pare-Plim. Their task however won’t be easy, with Marist St Pat’s having fired a very large opening salvo in taking down Norths and their side tomorrow has a few changes, but features three Hurricanes in their backline with Jonathan Taumateine returning from last week and joined by Billy Proctor on the right wing and Fletcher Smith at fullback. The home side are missing Murphy Taramai and may need some of that Maidstone magic to repeat their 2019 win.

After beating Ories, Hutt Old Boys Marist again venture through the Mt Victoria tunnel, this time to Hataitai to take on Wellington. The Axemen got their season off to an ideal start as well but will know that tomorrow represents a step up in opposition. Their side tomorrow has a few changes, amongst them Isaac Bracewell switches to fullback allowing William Cosgriff time behind their forwards. The Eagles are without James O’Reilly or the Rayasi brothers this week but Pakai Turia makes his HOBM debut in a re-shuffled backline and Ben Power moves into the hooking role.

Also back in action after off-season work is Lyndhurst Park, with Tawa returning to their familiar haunt for the first time this year and will be well-buoyed by their win over Wainuiomata. They are largely unchanged, with Akira Ieremia given his first start at lock, Tavita Logovae at blindside, and Trent Renata moving to fullback to give Luke Cummings a start at first-five. Avalon are the visitors coming off their narrow loss to Wellington. The Wolves have gone with size to try and combat Tawa’s pack meaning Logan Blake drops to the bench while behind them the old firm of Damian Madsen and Thomas Kiwara will try and drive them around the park.

Two teams that both dropped their openers meet at the Polo Ground with Paremata-Plimmerton winding their way through the city to face Oriental-Rongotai. The Magpies are resting a few players tomorrow, but it’s the appearances of Hurricanes prop Alex Fidow and his teammate and All Black Ardie Savea that grab the attention. Steven Va’a starts on the right wing against the team he scored four tries on debut last year. Pare-Plim have been training for the likelihood of Ories’ all-star additions despite their presence making an already difficult task that much harder, but at the very least will look to execute their plans better than last week. They’ve made a half-dozen changes, including Justin Wilson returning from injury to start at 10 in place of the stricken Dustin Wawatai.

Another pair of sides that suffered losses last week are at Helston Park, where Johnsonville hosts Poneke. Both teams struggled to get a foothold in the trying conditions against bigger and more physical opposition but may find things more to their liking tomorrow. As with the Rams the Hawks side wasn’t yet available, though Poneke get a couple of welcome additions in Hurricanes lock Isaiah Walker-Leawere and talisman Greg Foe but are without fellow veterans Cole Stewart and Galu Taufale, and manager Scott Garvie will pull on his boots to provide front-row cover.

Finally, bragging rights over the Hill Road will be determined when Petone make the short trip over it to William Jones Park to take on Wainuiomata. After their loss last weekend the home side will be keen to reverse course and will try that with almost the same XV with the only change being the ageless Uale Mai fronting at fullback in place of Josh Robertson-Weepu. Conversely Petone will want to keep the momentum of their win over Johnsonville moving, and also have a settled line-up with Ryan Imrie starting at hooker after two tries from the bench last Saturday and the inclusion of the Hurricanes South African winger Kobus van Wyk.

The pair contest their Darren Larsen Cup, donated several years back by the long-time coaching identity and current Hurricanes recruitment manager. Wainuiomata hold it after their 18-13 win last season, though Petone took their Jubilee Cup meeting with a 33-22 win.

This is the radio broadcast match as well, with live commentary in 1161am or 87.6fm or online at teupoko.co.nz from 2.30pm.

All seven matches again kick off at 2.45pm.

As with most weeks this season, five of the matches mirror the Premier matches to follow. Tawa will look to follow up their big opening win when they take host fellow first-up winner Avalon at Lyndhurst, while the other game between sides that got the spoils on opening day is at the Polo Ground between Ories and Pare-Plim. Norths head to Nairnville to face OBU aiming to continue their winning ways, Poneke do likewise at Helston against Johnsonville, and as do Petone A over the hill against Wainuiomata. In the other two matches Petone B host HOBM at the Rec, and Stokes Valley are at home on Delaney Park for their tilt with MSP.

All matches are at 1pm, bar the contest at Delaney Park which is 2.45pm start.

Like the Men’s, the second round in the Women’s competition has a bit of a consolidation look to it. Perhaps the most-even looking match-up on the schedule is on Kilbirnie Park #2, where Marist St Pat’s and Paremata-Plimmerton meet in a repeat of last year’s Division 2 final, while next door Petone start their season against Poneke on #1. Hutt Old Boys Marist will look to put last weekend’s capitulation behind them but face the mammoth task of taking on Oriental-Rongotai, with Old Boys-University looking to get into the wins column when they host Avalon in the Ian Galloway cage. Norths have the bye this week.

All four matches are at the usual 11.30am kick-off time.

The altered season has had an impact on the age grade competition with some clubs – Paremata-Plimmerton, Avalon, and in something of a surprise Oriental-Rongotai – not fronting a team considering the relaxed regulations for this season. There are still 13 teams entered however, which should provide a useful barometer of where the game is at.

Two of the favourites meet in round one, with defending champions OBU Green taking on Norths Blue in the Ian Galloway cage and having played each other in preseason last weekend. Also in the city Wellington host HOBM at Hataitai, Johnsonville face Poneke at Newlands Park, and Tawa and OBU Black meet at Redwood Park (12.30pm). The other two matches are in the Hutt, and Wainuiomata welcoming Petone to Mary Crowther (12.45pm). MSP were to take on the Upper Hutt Rams at Maidstone as well, but this match has been cancelled as the MSP Colts have pulled out of this grade (more on this pending)  Norths White have the opening bye.

Unless stated, all matches are at 1pm.

Unfortunately, the slide of the 85s grade continues but perhaps not wholly unexpected given the events of the year to date. Just nine teams are entered this season, with Johnsonville and last year’s runners up Paraparaumu dropping out (though the latter have indicated they intend to return for 2021), but with Poneke returning to the grade, and they take on neighbours MSP on Kilbirnie #3 in their first game back. Grade champions Avalon are also away from home, heading to HW Shortt to take on Eastbourne, the Upper Hutt Rams welcome Western Suburbs, and the OBU Scallywags and HOBM take to MacAlister Park.

As with last week, last year’s Top 4 remain in pre-season action amongst themselves. Both matches are out in the eastern suburbs with Rongotai hosting Silverstream and Town meeting Scots at Evans Bay, with 2.30pm kickoffs in both those matches.

Four teams have the chance to join those four in the Premiership this week, with the winners of the match-ups between St Bernard’s and Wairarapa (at 1pm) and Hutt International and Wellington College (2.30pm) advancing and having a weekend off to  rest and prepare; while the losers have a second chance next weekend.

Behind that, six matches will determine the remaining sides to contest next weekend’s Premiership qualifiers. In those Mana host Upper Hutt and Paraparaumu welcome Onslow (at 1pm) in the matches between sides that won in the lower tier last week, while the second chance bracket has a local derby between Bishop Viard and Aotea, and Tawa take on Wainuiomata, with all matches at 2.30pm unless stated. The other two matches have already been decided with Hutt Valley HS and Taita defaulting to Kapiti and Porirua respectively.