Skip to content
You are here
Home > Club Rugby > New blood, new blonde. Aidan Morgan on his move to MSP 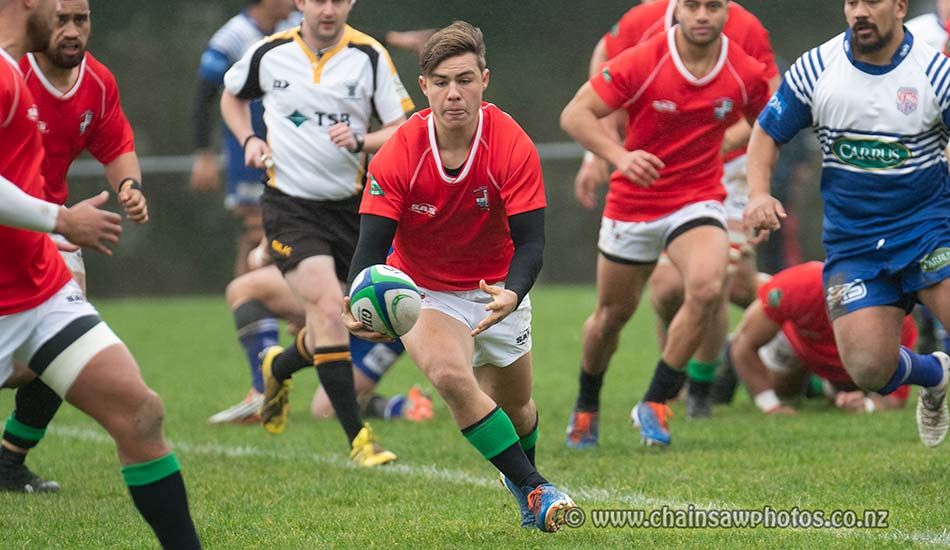 Marist St Pat’s fans could be forgiven for not knowing who their blonde and effective first-five was in the opening match of the Swindale Shield last Saturday.

Who is Aidan Morgan?

Young enough to be Fili’s son, Morgan is a member of the Wellington Rugby Academy. He is from Auckland and studies a Bachelor of Commerce at Victoria University.

A member of the New Zealand Secondary Schools’ team last year, he has two brothers Calem and Declan from St Peter’s College. Aidan went to King’s College on a scholarship.

“I was offered a scholarship while playing at Cornwall Park Primary. It was a pretty huge opportunity for me to go to a school like King’s. King’s helped pay for my education and their rugby programme is awesome,” Morgan reflected.

“In Auckland, anyone can beat anyone on their day, and that’s the great thing about the competition, there’s always upsets. The scholarship thing has got quite political, but for the boys, it’s about playing rugby and doing the best we can.”

Morgan’s best was exceptional at King’s. He was first selected for the First XV in 2017 at fullback and eventually earned a starting spot in his rookie season, despite the team itself underwhelming.

The following year proved to be a breakthrough. King’s made the final of the 1A competition where ironically they were beaten 29-28 by eventual National champions St Peter’s.

In an epic tussle, St Peter’s led 17-0 in as many minutes only for Kings to rally and lead before St Peter’s nudged ahead again. The last play of the game saw King’s centre Lukas Halls fumble the ball over the try line after a thrilling kick and chase bust.

“They got a jump on us and really rode their momentum. We knew we had to get down there and play structure. If we could keep in touch we could take them at the end.”

“We were all guttered for Lukas. It wasn’t his fault we lost. It was an awesome run and he’s since played a couple of games for Taranaki. He’s moved on,” Morgan reflected.

King’s moved on in 2019 capturing their first 1A title since 2005. Mark Kennelly, who mentored the 2005 team, was partnered by former Italian international Scott Palmer and South African sevens representative Kevin Putt in the coaching department.

Morgan flourished switching to his “much preferred” position of first-five. Man of the match in three nationally televised fixtures, he was named 2019 Auckland Secondary Schools rugby player of the year, helping King’s make the National Top Four final where they were beaten by Hastings Boys’ High School.

In the earlier 1A final at Eden Park, King’s beat Saint Kentigern College 29-22 with King’s hanging on grimly after leading 29-5 at one stage. Paul Cully writing for Stuff observed:

“Morgan’s performance will have every rugby and league talent scout in New Zealand and Australia asking about his services as he repeatedly cut through the St Kent’s defence with his footwork and acceleration. He also defended superbly.”

“Blessed with footwork and pace and built like a stockier Damian McKenzie, Morgan also delivered plenty of chat during the halftime break.”

“I try to read the game as best I can and create and take opportunities. I practice my goal kicking a lot but I’m not really interested in individual statistics and hype.” Morgan said.

He chose to come to Wellington for “something different” and because the club competition “looked good.” The Gallaher Shield in Auckland has been cut from 16 teams to 10 in 2020.

After a solid showing against Poneke in pre-season Morgan looked assured in his official debut on Saturday against Norths. Playing into the teeth of the southerly in the first half, MSP turned with a 12-5 advantage and used the conditions to pull clear. Morgan praised the industry of his forwards.

“We took them on up the middle and managed to get on top. They’re a big team and might not have expected that.” Morgan said.

“He’s a really nice guy helping with the coaching. I have huge respect for what he’s done. It’s only round one, but it’s a privilege to be playing for MSP.”

This week MSP travels to Maidstone Park to tackle the Upper Hutt Rams. The Rams beat Paremata-Plimmerton 20-8 in the first round and toppled MSP for the first time in 26 matches since 2002 last year. The match kicks-off at 2:30 pm.

One thought on “New blood, new blonde. Aidan Morgan on his move to MSP”