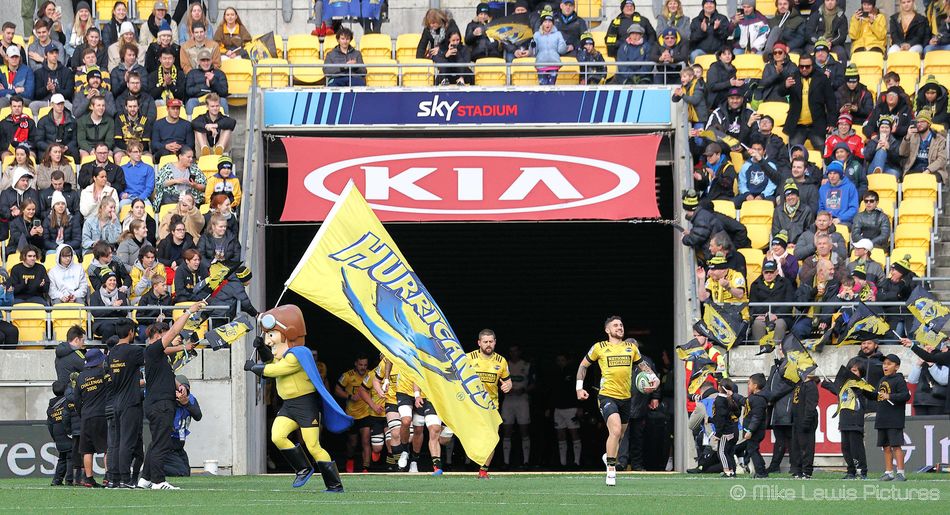 Above: TJ Perenara and the Hurricanes enter Wellington Stadium on Sunday to play the Crusaders.

Of the changed law interpretations announced by New Zealand Rugby with regard to Super Rugby Aotearoa, the increased focus on and sanction of players not rolling away from the breakdown has been the most jarring for spectators – this largely due to the offence being a significant contributor to huge penalty counts in the first games of the competition. Players have always been penalised for this indiscretion; what is the essence of the rule change, then, and how may it affect play in the future?

In the Round One match between the Blues and the Hurricanes, Referee Mike Fraser accosted Blues captain Patrick Tuipolotu about his team’s string of penalties for the tackler not rolling away from the breakdown. It was less what he said, and more what he nearly said, that was more illuminating; Tuipolotu asked whether the issue was his team not rolling away, or was it that the referee thought that they were not trying to roll away. Fraser initially began saying that “it doesn’t…” before cutting himself off and telling Tuipolotu that “they’re getting caught, and they’re affecting the speed of their ball.” One cannot ever be totally confident in putting words in other people’s mouths, but it seems pretty clear that Fraser was about to tell Tuipolotu that it does not matter if the players were trying to roll away or not; thus, despite one’s best efforts to move out of the way, one could be penalised if a referee thought that you were somehow slowing the ball down.

In law, this approach is called strict liability. Normally, crimes require both mens rea and actus reus, meaning ‘guilty mind’ and ‘guilty act’. To commit a crime, one would normally have to intend to do a certain action, and then follow through with it. This is why defenses to crimes include insanity and automatism; in both cases mental capacity to understand the action is reduced and therefore the law will not hold the perpetrator accountable. Strict liability ignores this distinction and thus strict liability crimes can be committed by those with no intention at all. Mike Fraser’s acknowledgement that players were being “caught” in the breakdown supports this. If players are being caught in the breakdown, what then should we think of their captors?

A great example is an otherwise innocuous breakdown in a previous match between New Zealand and Australia. A brilliant duel between David Pocock and Richie McCaw culminated in Pocock seeing a chance at a turnover and lunging over the top of the breakdown to secure the ball. The referee, however, did not believe that Pocock was eligible to use his hands and told him so. McCaw, seeing Pocock in this compromised position, immediately bound himself to Pocock so that he was trapped on the ball that he had been told to evacuate himself from. The penalty was duly awarded to McCaw and the All Blacks.

It seems insignificant, a microcosm in a game. It was significant, though, because it asked important questions. Does a player need to intend to commit an offence? What if they changed their mind and attempted to withdraw? Could it be acceptable to trap opposition players in order to gain the favour of the referee? A common occurrence at the time was the ‘halfback passes the ball into the retreating defender and milks a penalty’ pantomime.

What is the difference between these two occurrences? The similarities are plain. In both, a player is in a compromised position – over a ball that they shouldn’t be over, or on the wrong side of the breakdown. In each, an attentive opponent notices and takes advantage of the situation. Both are legitimate penalties, existing in the Laws for legitimate reasons. The difference is this – in one of the examples, a player put themselves into a compromised position, took the risk, made the choice. In the other example, a player was penalised for doing what the very nature of the game not only demands of him but forces him to do; that is, retreat onside. One had a choice, one did not.

I understand that some players might seek to gain an advantage during their retreat: they might move a little slower, or take a route that is less convenient for their opponents, or otherwise make a nuisance of themselves. The fact remains, however, that they have to make their way back somehow, and rewarding with a penalty any halfback that fires the ball into a sincerely retreating player makes a mockery of the idea of an offside. We have an ‘accidental offside’ rule for a reason, and repeat offenders can be properly sanctioned.

It is important to review the way in which law interpretations incentivise behaviours. Take this case: In almost all circumstances, a penalty (especially a penalty with advantage attached) is better than fast ball, perhaps except for the presence of a large overlap or other immediate try scoring opportunity. With that preference established, we know that attacking teams would likely prefer to milk a penalty at the expense of fast ball. If teams know that tacklers trapped in the ruck were judged not by the earnestness of their attempts to free themselves but rather the extent to which the ball was delayed by their presence, what then is the attacking team incentivised to do? They are, of course, incentivised to trap the tackler with their legs and knees and bodies, to exaggerate the difficulty of maneuvering the ball past them, to complain that the ball was being spoiled. In other words, this interpretation, designed to speed the game up, is likely, by its very nature, to incentivise attacking teams to slow a ruck down on purpose to win an easy penalty. If this is the case, it is a perverse incentive that should be carefully considered by the administrators of the game.

If this all sounds terribly cynical, it most definitely is. However, interpretations must be examined with all the cynicism of the professional player looking for an edge over his opponents. To treat rules with anything less than this is simply naïve.

Players of the past have habitually thrown themselves onto the wrong side of the tackle in order to slow the ball and even help their team win the ball. Other less dastardly players are simply not self-aware and thus slow the ball down through their lack of consideration about how their body position affects the breakdown. This tough interpretation of the Laws could lead to less offending by both categories of players. However, I would venture that the previous interpretation of the Laws allowed astute referees to control the game effectively whilst also making exceptions for freak pile-ups where obstruction was inevitable and moving was impossible.

Where can the referees go from here? Well, one might say that the only way is down, with regard to the intensity of scrutiny at the breakdown. They certainly cannot penalise any more than they have! This latest surge in enthusiasm for one area of the game is reminiscent of several years ago when ruling on the angle of the feed at the scrum became fashionable. For a season or two, halfbacks were penalised constantly for their offending rolls. Then, referees began to realise that the combination of a preset scrum and the simple action of a hooker lifting their leg was causing the scrum to crumple, meaning that a scrum feed was virtually a disadvantage. Referees lost all interest and the law was later changed to allow halfbacks scrum feeds that were even more crooked than the ones that they had enjoyed before the whole debacle! We will likely not see such a reversal – but one would think that fans will lose interest pretty quickly if we continue to see penalties dished out at the rate that they were in the first round. Okay refs, we get the message. No more loitering at the back of breakdowns. It was just a message… right??

On a lighter note, the other change to how referees are refereeing the breakdown has had an amusing side effect. Referees are now requiring players to roll “East to West” – as in, to the side of the ruck rather than towards their opponents’ side. This is a good change, as often a rolling player became an obstacle for cleaning players to trip over as they attempted to join the breakdown. However, there must be some common sense attached to the direction a player can roll; DuPlessis Kirifi emerged at the back of a breakdown whilst playing against the Blues. Instead of rolling out the side that he was on, he then proceeded to roll “East to West” virtually across the entire back of the breakdown and basically through the legs of Blues halfback Sam Nock! Mike Fraser did well to remember the new interpretation, but to not penalise such a bizarre action surely must call into question common sense interpretations of these new rules.