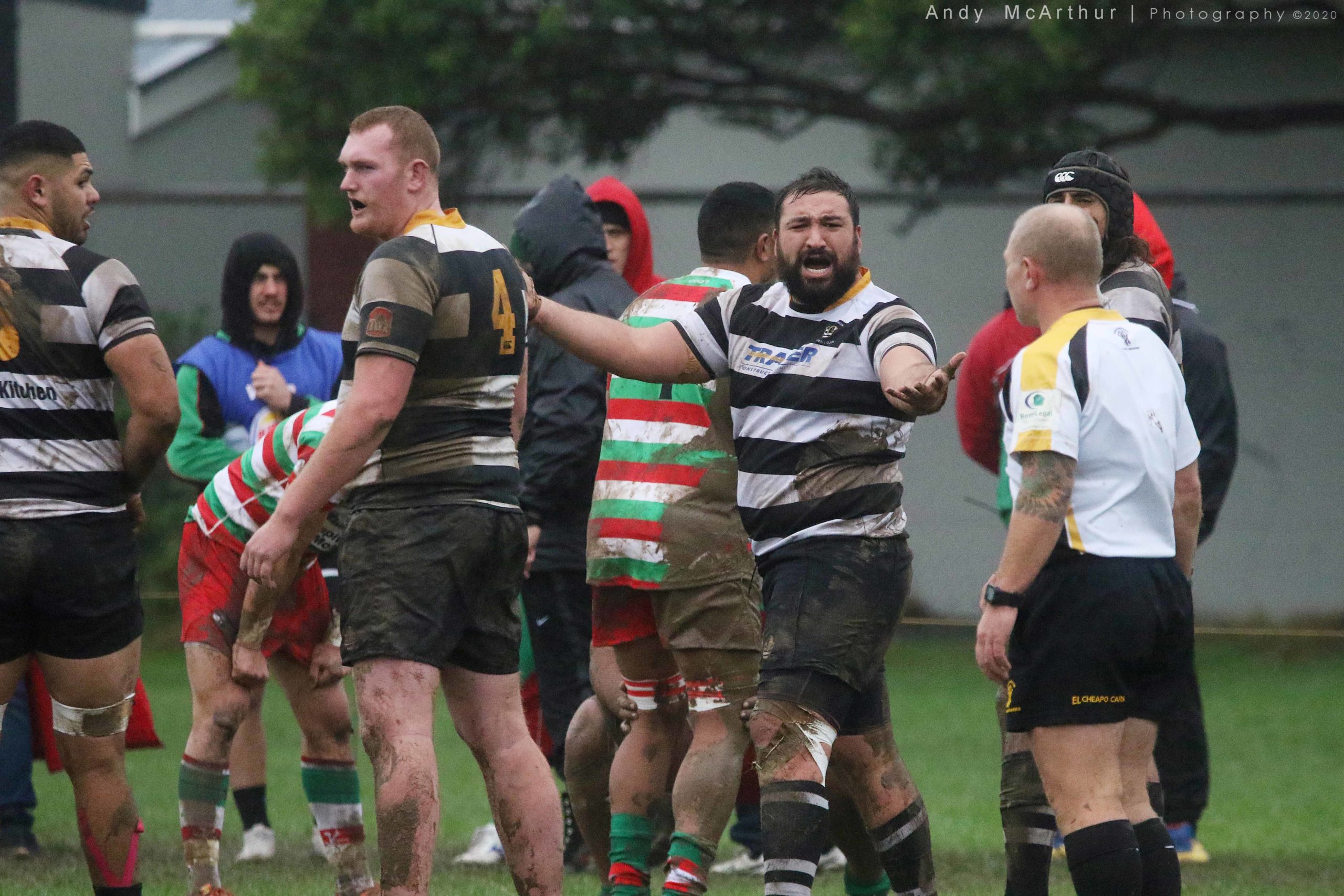 That’s week one done and dusted – a trying day for rugby on Saturday, and not much better on Sunday for the Hurricanes match.

This coming weekend sees the start of the Colts and U85kg competitions – so look out for the draw and details of these competitions.

There could be some more Hurricanes squad members playing club rugby this coming weekend as well, so look out for some news around that later in the week.

Norths and Petone will have more than just Ories on the field to overcome if they are to claim the Premier Women’s title this season, with news that both sides have been docked two points for breaching the WRFU’s youth player policy. It’s not the first time a team has fallen foul of this, with Ories themselves guilty back in 2018. Heading into this coming weekend’s second round, Norths are on 3 points and Petone -2.

Spectators at Ngati Toa Domain on Saturday watching the Premier Women’s match between HOBM and Paremata-Plimmerton would have wanted to be at the southern end of the ground. Incredibly, all 54 points were scored into the stiff Southerly. HOBM looked like winners leading 24-0 at halftime, before Paremata-Plimmerton came back and scored 30 points (6 tries) in the second half.

A run on umbrellas at the Warehouse this week?

Unfortunately Opening Day didn’t go well for all, particularly young Paremata-Plimmerton first-five Dustin Wawatai who suffered a serious leg injury on his debut against the Upper Hutt Rams, which also saw the match moved across to the #2 field at Ngati Toa Domain. Club Rugby wishes him all the best for his recovery.

Last year it took until well into the back end of the season before we had a dropped goal in the Premier season (by Pare-Plim’s Justin Wilson in the Hardham Cup). This term we got one in week one, snapped by HOBM’s Brandyn Laursen to give his side breathing space with the final score in their 11-3 win over Ories. See Super Rugby pots below.

Heard from the terraces at Nairnville Park on Saturday, “thats not rolling away east-to-west ref!!!”. Clearly the new emphasis on the tackler rolling away correctly and the terminology involved seems to have already struck home with some!

The opening weekend saw a number of players make returns after long-term injuries, such as Petone lock Jack Ross who missed all of the 2019 season, and MSP women’s Cheyne Copeland who has missed the last two years. Others have benefited from the delayed season, like Poneke’s Greg Foe who played for their Premier Reserves in his first action since off-season knee surgery

Kudos to Felix the Ories cameraman. He moved a fridge (and they feed them at Ories)and using a broom kept a flapping window open to film the Hutt game on a hand-held camera. That’s more resourceful than Marry Poppins.

Well done to Paddy Carter who celebrated his 50th game for Old Boys’ University, and to Taisson Lealaisalanoa who brought up the same mark for Paremata-Plimmerton. Additionally Norths’ Denny To’o played his 35th and blazer game on Saturday as well.

The Hurricanes lost their first two games in 2016 and went on to win the title.

Questions and Grumblings from the Stadium:

“Pickerall’s blowing us back to Level 4”

How much better is the Fortune Favours beer than previous choices?

Was the idle Hurricanes plane [Hurri-plane] because of lost revenue or concerns for spreading carbon emissions?

Alan Iverson-Kirifi has a nice ring to it.

Counting pre-lockdown Super Rugby, the Blues have won six games in a row. Their record is 12 in 1997.

The dropped goal is back. New Zealand teams didn’t kick a single droppie in Super Rugby 2019. There has been at least one kick in three of the four Super Rugby Fixtures.

How many combined penalties in the opening four matches of the competition? Update: Answer = 109.

The record for most penalties in a game for the Hurricanes in any Super Rugby game is 7 by Jamie Cameron v Blues in 1996 and David Howell v Highlanders in 2001.

Andrew Mehrtens kicked 17 drop goals in his Super Rugby career. The next best by anyone else is 3 by Lima Sopoaga.

All Black Ack (Alistair) Soper has died in Invercargill, leaving a legacy of eight games in the black jersey, more than 100 games for Southland, and winning the Ranfurly Shield.

Soper played eight times for the All Blacks on the 1957 tour of Australia, he also played for London club Blackheath in 1960-61.

When he played on the 1955 New Zealand under-21 tour of Ceylon (now Sri Lanka), he was touted as the player most likely to succeed at top level. Wilson Whinerary and Colin Meads were also in that side.

Norths weren’t the only defending club champions to start in less than ideal fashion. Hawke’s Bay champions Napier Old Boys Marist lost to Napier Tech, while Taranaki’s Spotswood United were held 20-all by Stratford-Eltham. No such drama for Manawatu champions Feilding, who eased into their work with a 52-7 win over minnows Freyberg.

A winning double for now-former MSP hooker Joe Walding-Karaitiana in his return to the Hawke’s Bay on Saturday. The Hastings Boys’ High product served a number of seasons at Evans Bay, but fell down the pecking order last year with the arrival of Tyrone Thompson and the return of the nomadic Valentine Meachen. His two tries helped his new side Taradale beat MAC 33-22

The bleakest venue on Saturday? Rongotai College would have to be a contender for this accolade. The Rongotai and Scots College First XVs drew 5-5, and perhaps the fastest run of the day would have been to to the safety of the changing rooms on fulltime.

This is encouraging. The secondary school girls competition gets underway this Wednesday, with the first of two pre-season rounds and 10 schools involved. There are seven schools involved in the U15 Development grade – including Mana College, Wellington East, Hutt Valley High School and Paraparaumu Colleges (in term 3), making 21 teams and 14 schools taking part.

Wanted (by the end of this week): a tripod or monopod. Not one, but two have given up the ghost or suffered a technical malfunction in the extended off-season. If someone cane help please email editor@clubrugby.co.nz

The speaker-man overlooks the Ories gym during their pre-game warm-up Ories warm up. Barry Manilow or Siglo bar on a Saturday night?

England fans’ use of Swing Low, Sweet Chariot is reportedly under review after growing awareness of the Black Lives Matter movement in UK sports in recent weeks. The song, which has links with slavery, was apparently first heard at Twickenham in 1987. Martin “Chariots” Offiah was appearing at the Middlesex 7s at that time and the song has been regularly sung on the Test rugby terraces ever since Chris Oti scored a hat-trick of tries for England versus Ireland the following year. Read more HERE