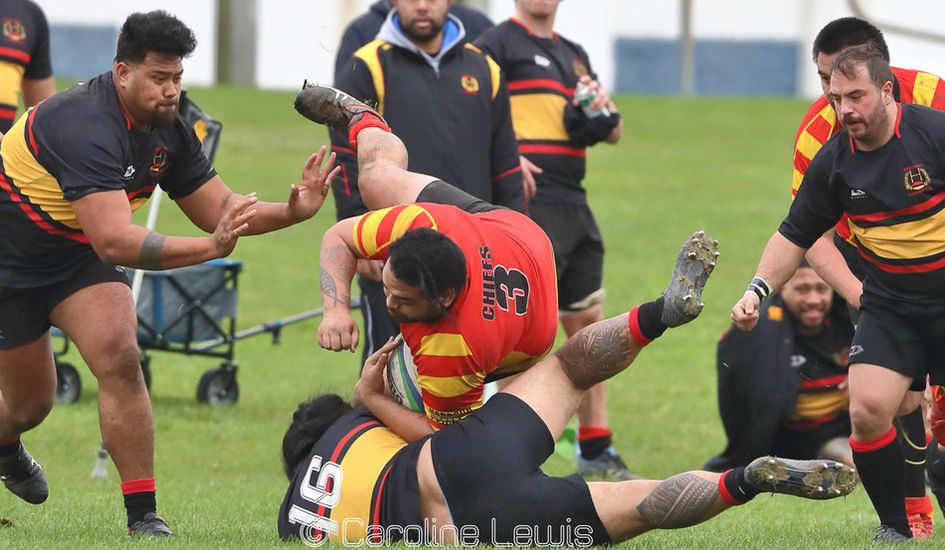 Above: Stokes Valley have joined the Harper Lock Shield Premier Reserve competition this season, missing out to Paremata-Plimmerton’s second team 25-12 in today’s opening round of Wellington club rugby competition matches. More below.

With former captain Isaac O’Connor back in the team at openside flanker and young gun first five-eighth Aidan Morgan on debut, a more focused and energised MSP deserved their win for the Maurice Standish Trophy.

Playing into the teeth of the southerly in the first half, MSP came out firing and were rewarded with a converted try to second five-eighth James Proctor to go 7-0 up.

Norths hit back with a try to prolific club rugby try-scoring No. 8 Luca Rees, but when Hurricanes halfback Jonathan Taumateine darted over they took a 12-5 lead into halftime.

This was extended to 15-5, before losing lock Charles Gubb to the sin-bin and then being asked to defend for long periods of the second half.

But it was Norths that dropped the ball next, literally, in attempting to run the ball out from deep inside their territory, and MSP second five-eighth James Proctor scooped up the offerings and went through to score to make it 20-8.

There was an eye-catching result in the curtain-raiser with Norths beating MSP’s second XV, unbeaten for the past 23 starts, 43-10 in the Harper Lock Shield.

Beet Algar was a slashing Poneke back of the 1920s. He would have  been largely redundant today at Nairnville Park that was dominated by the grim conditions as much as anything else.

Old Boys University’s 25-5 win over Poneke to retain the Beet Algar Rosebowl and Bill Brien Shield was built on their powerful scrum and smothering close-to-the-ruck defence.

The Ben Huntley-led Poneke side was in the game for long periods, but some handling mistakes and ill-directed kicks at key moments also proved costly, as OBU turned territory into points in building an unassailable 18-0 lead.

With the wind at their backs, the Goats went to a 6-0 lead after 15 minutes through a pair of Dale Sabbagh penalties, before the first of two first half tries was scored by hooker Wirangi Parata off a dominant lineout drive.

The second of these tries and most telling play of the match came right on halftime, when OBU won a penalty off a Poneke loosehead scrum inside their own 22, and repeated the dose with the try this time in front of the cricket nets, though no one was quite sure who scored it.

The skies visibly darkened early in the second half, as Poneke threw everything at OBU, who largely absorbed their efforts except for a solitary 58th minute try to close the gap to 18-5. Abandoning their scrum, Poneke tapped and drove towards the line from 5 metres out and were rewarded.

OBU had the better of the final 20 minutes and created several half chances. They eventually scored again to clinch the match a few minutes before the end – off a tighthead scrum win and try off the back to No. 8 Shamus Hurley-Langton. OBU skipper Jonathan Fuimaono was at the heart of their scrum dominance and made a couple of bone shaking hits on defence.

The Nairnville Park curtain-raiser went the other way, with Poneke prevailing 15-13.

OBU led this one 13-5 at halftime, but with Greg Foe – playing his first rugby since a knee reconstruction – directing play on the side of the scrum, Poneke came roaring back to score two consecutive tries in the second half to hit the lead. They made their tackles and pushed OBU back with the wind advantage to earn a big first up Harper Lock Shield win.

Hutt Old Boys Marist extended their unbeaten run against Ories to seven consecutive matches scrapping their way to an 11-3 victory over the determined hosts who fielded five Premier debutants.

Malo Manuano opened the scoring with an early penalty for the Magpies, but scoring chances were sparse as tough handling and freque3nt whistle was a source of disruption.

The only try of the game was spectacular and occurred midway through the first half. Ories lost the ball in a maul and Hutt swiftly swung right with fullback Salesi Rayasi injecting himself assertively into the backline and circling the fullback in a 25-meter burst.

Manuao missed a handy penalty shot and the halftime score was 5-3 to the Eagles.

The lineouts were largely a lottery, but when Hutt secured possession they used the maul effectively to blunt Ories. Their general kicking was marginally superior as well as teasing in the young and pacey Ories backs into more errors.

With about ten minutes remaining, Brandyn Laursen kicked an unlikely penalty, from an angle 45-metres out, to make it 8-3.

Laursen, an assured presence all afternoon, would have the final say when a kicked a dropped goal to seal the victory. The kick went over despite a deflection from an Ories defender.

In addition to Laursen No.8, Josh Brown and hooker James O’Reilly were a hive of activity with the former becoming a reliable lineout target. Ories lock Tuakana Metarau and openside John Tuia were strong and prop Connor Lemon assumed throwing duties in the second half.

The results in the four Rebecca Liua’ana Trophy matches went with the form guide.

Norths matched their great rivals in the points scoring department, but did concede a late penalty try to Old Boys-University for a 54-7 result.

After scoring an early to Black Ferns Sevens right wing Dhys Faleafaga, Norths were kept honest for much of the first half by the OBU Impalas who dominated territory but couldn’t penetrate their defences.

Norths broke out and outstanding lock Syntyche Tuimaolo finished off a sweeping team movement in the far corner. Second five-eighth Ngarangi David scored a similarly constructed team try and then fullback Harmony Ioane crossed to put them up 20-0 at the turnaround.

Now with the wind, Norths scored two quick tries, to halfback Jodeci Rere and then to Tuimaolo, to put the game out of reach. Ioane and Tuimaolo scored again as they pulled clear.

Defending champions Ories caught fire in the second half to blank Marist St Pats 54-0. The visitors were genuinely competitive in the first-half with two intercept breakouts, some extended phase play, and torrid defense. However, when second-five Bernadette Roberston powered over for her second try just before the break it was the cue for the floodgates (bad pun) to open.

Fittingly Black Ferns win Ayesha Leti-I’iga scored the first try collecting a loose pass, fending off two defenders and scampering clear. Robertson’s first was achieved after fine support play and anticipation while her second was a slammer underneath the sticks.

The sad and sudden retirement of Charmaine Smith has perhaps reopened the Black Ferns door for Joanah Ngan-Woo and she played as a woman possessed. With similar attributes to the retired champion, Ngan-Woo scored Ories’ fourth try and was a force in general play. Leti-I’iga, Fa’asua Makisi, Isis Touw, and Amanda Rasch completed the scoring. Amanda kicked seven from eight, including at least two sideline crackers.

For MSP first-five Cheyne Copeland and openside, Jaydah Timu were skillful and brave.

Paremata-Plimmerton edged out Hutt Old Boys Marist 30-24 at Ngati Toa, and Avalon saw off Poneke 20-5 to complete a sweep for the home teams.

The first round of the College Top 4 saw Silverstream beat their Town cousins 24-14, and Rongotai and Scots draw 5-all in what must have been extremely bitter conditions on the edge of Lyall Bay.

In the qualifying action, Wellington College beat Porirua 32-10, Hutt International edged Aotea 20-19, Wairarapa likewise had a one-point win 17-16 over Tawa in Masterton, and St Bernard’s put Kapiti to the sword winning 61-0. Those results mean College will play HIBS, and Wairarapa takes on St Bernard’s next weekend for the right to advance to the Premiership and enjoy a week off.

From the vault: third round matches in photos