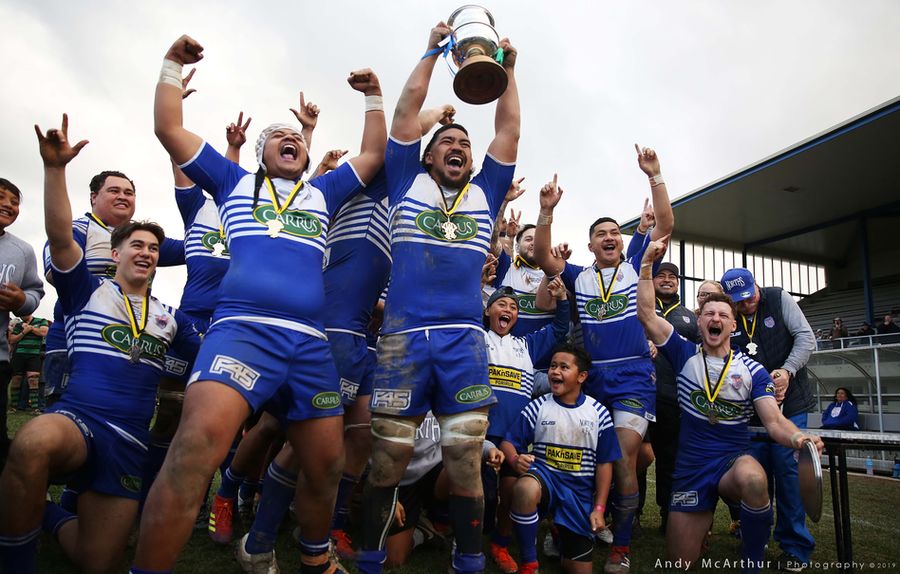 Parekura Lalaga and Norths with the Jubilee Cup last year.

“I’ve been here at the highest points and the lowest points. It’s true, a winning club attracts people, but when we were in a slump the family buzz went missing. Today everyone has a voice,” Norths captain Parekura Lalaga warns ahead of the Swindale Shield opener on Saturday.

“We’ve had an injection of young blood. I’d love to say a lot of the kids are coming home and that creates a real buzz at training and in the community,” he said.

“We’ve got a great culture and a bit of depth. The young guys are bringing a lot of energy and will keep us old dogs honest,” Lalaga said.

Norths beat Wainuiomata 25-16 in the Jubilee Cup final last year. Bursting out to a 19-6 lead after half an hour was telling as the game settled into a tense arm-wrestle.

“It’s special when all the hard work pays off. In 2017 we might have got a bit ahead of ourselves, but last year we didn’t do anything differently. It was a memorable moment to execute the game plan and share our success with the community,” Lalaga reflected.

Marist St Pat’s don’t represent an easy start to a title defence. Despite dropping to the Hardham Cup for the first time since 1974, MSP won 11 of their last 12 games to end 2019 and thrashed Norths 48-31 at Evans Bay Park after leading 31-0 at halftime. The ‘Reds’ performance was a passionate tribute to the recently deceased Pua Magasiva.

“MSP is a staunch club and it’s always a tough game against them. We don’t expect anything different,” Lalaga observed.

In newly appointed captain Tom Martin, Aidan Morgan and Tyrone, and Leo Thompson, MSP boast four of the elite youngsters in the capital while James Procter and Willie Schutz were full of running in a pre-season hit-out against Poneke on Saturday. Schultz scored 23 points in the corresponding fixture.

The Maurice Standish Cup is at stake. The former Wellington flanker played 61 games for his province and was an outstanding Premier player for MSP. He was a Jubilee Cup champion as a player and then coached the Premier team to Jubilee Cup victory in 1988. He also played at Titahi Bay and later coached at Northern United as he was a resident of that area.

The Cup was inaugurated in 2017 with MSP winning the inaugural clash 50-14. Norths returned serve with a 64-36 victory to capture the Swindale Shield in 2018 before MSP reclaimed the spoils 398 days ago.

The match kicks-off at Jerry Collins Stadium at 2:45 pm with live commentary on the E Tū Whānau Footy Show, on 1161AM and 86.7FM or by listening online HERE

Two titles for the Wolfpack in 2021