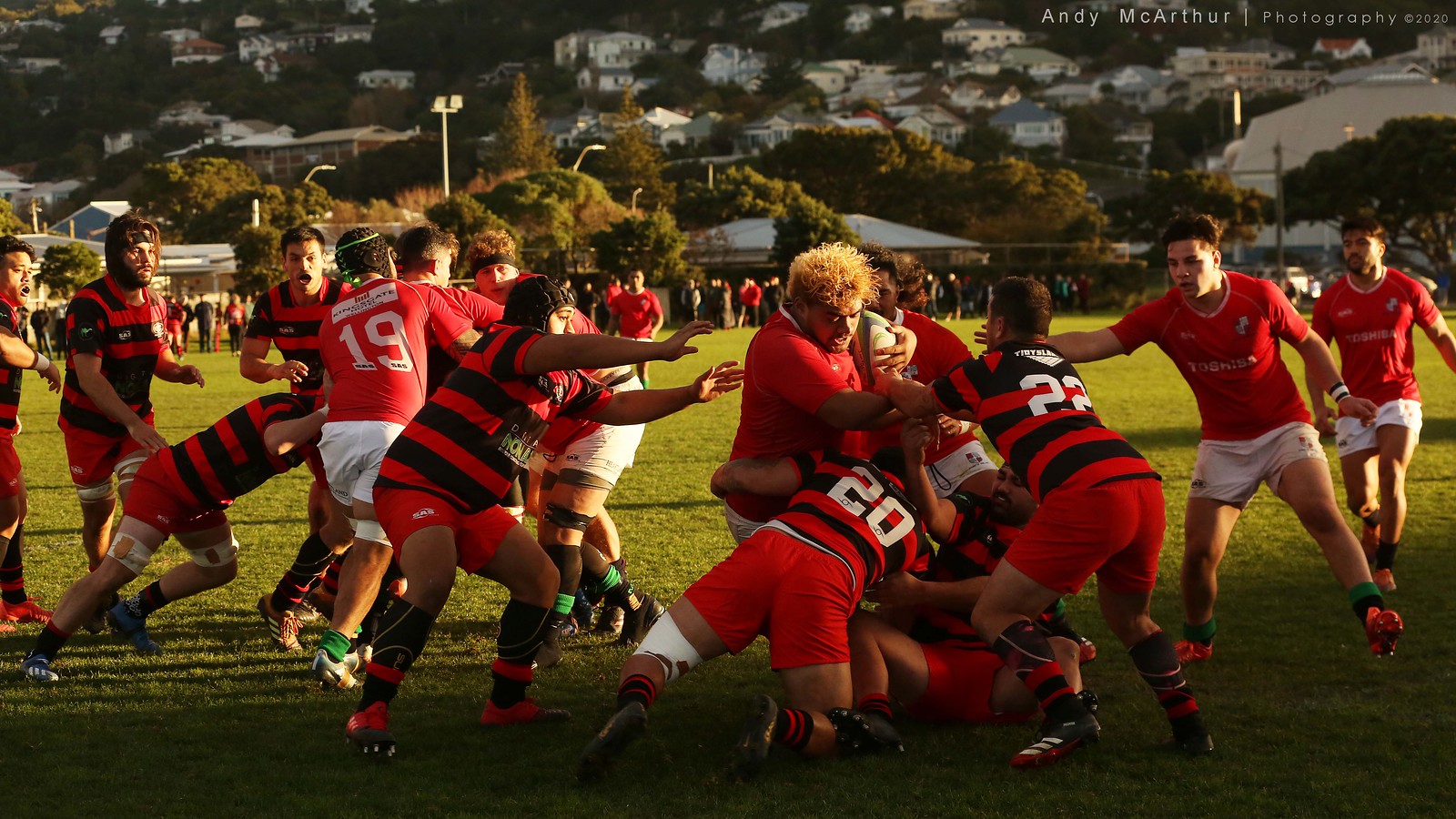 How good was it to see rugby and live sport this past weekend!

Five sleeps until the local competitions start for real, and we say the delay will be worth it.

It’s only for the first week, but the Premier Reserve Harper Lock Shield draw is out, and with it paints a picture of the state of the club game. Fifteen teams are entered, with confirmation that neither Wellington nor the Upper Hutt Rams are fielding teams in the grade, but with the additions of Stokes Valley and second teams from both Petone and Marist St Pat’s (and the potential of a 16th entrant in the form of a second team from Norths), and Wainuiomata and Avalon both entered after plenty of conjecture over their status in the past couple of weeks.

But balanced against that, is that there will not be a First Grade competition in 2020, furthering the slump in open grade team numbers.

A couple of items of interest in the Women’s game. Pride inside back Acacia Te Iwimate has turned her hand to coaching as she recovers from an offseason knee reconstruction, but with Paremata-Plimmerton rather than the Petone side she’s turned out for in recent years.

And Marist St Pat’s have a new lock/loose forward who might be recognisable to a few faces, with former National Squad referee Tarsh Ganley – who refereed the 2017 Farah Palmer Cup final before giving the whistle away for now – turning out for the Evans Bay side this season.

College rugby gets underway this Saturday as well, and at the sharp end 16 teams are vying for the right to join Scots, Silverstream, Town, and Rongotai in the Premiership this season. In the Top 8 clashes Wellington College – going through this process for the first time – hosts Porirua, Premier 2 champions Tawa again make the trek over the Remutaka’s to face Wairarapa College, Kapiti hosts St Bernard’s, and Aotea face Hutt International.

St Bernard’s College warmed up for their Premiership grading fixtures with a 31-26 victory over a Palmerston North Boys’ High School selection. In a game of 30-minute thirds, the hosts actually lost two-thirds of the contest but a strong showing in the middle saw them prevail by a try. Playing openside, New Zealand age group softball representative Jono Little, was a standout scoring two tries while halfback Tana Rangiwhetu scampered clear after collecting a charge down on the full. The highlight of the match was a try ‘from the end of Waterloo Road’ scored by St Bernard’s No.8 Jay Laban. Keeping the ball alive perilously, and stretching to both touchlines, Laban eventually finished a St Bernard’s movement which consigned social distancing to the dustbin of history. Halfback Jakob Rauhihi-Collis and lock William Haywood, who could touch the clouds, were promising for Palmerston North.

Kudos to a reserve in the Palmerston North v St Bernard’s fixture using blue water bottles as the touchy.

After a sluggish start, and copping a few bruises in a brutal opening, St Pat’s Town First XV put the Marist Colt’s to the sword in a pre-season hit out. Town is BIG and Lock Rory Woods is a beauty. Strangely Town was wearing St Pats Silverstream jerseys from an Old Boys fixture in 2014. Did Town miss out on an apparel subsidy or are they older than they claim? The try of the match was scored by Cam Burgess who ran down a long, miss-directed kick.

We counted 12 Wellington College rugby teams in action on Saturday. A rugby renaissance at the school? Meanwhile their First XI football team found itself in all sorts of trouble at 0-4 down to Rongotai College at halftime in their fixture on Saturday, recovering to lose 4-5.

Their opening Harper Lock Shield Premier Reserve fixture this coming Saturday against Northern United will be a feature clash of the round.

Norths fielded three teams in consecutive fixtures against the Upper Hutt Rams (only team) and Hutt Old Boys Marist (two teams), so depth doesn’t appear to be an issue there. As alluded to above, it seems they could comfortably slot in a second team in the Harper Lock Shield.

MSP beat Poneke 31-12 in a pre-season Premier grade workout. MSP was always in front but withstood earnest resistance from the visitors in the second half. Wing Willie Schutz’s try from a chip and chase was noteworthy.

Over at the Polo Ground, the Tawa Premier Reserves overcame Ories 48-14, while the Ories Premiers won their game against Tawa 31-19.

The first try in Super Rugby Aotearoa was scored by a guy called Ash. Does that seem apt?

Bryn Gatland kicked the winning dropped goal for the Highlanders to defeat the team his dad coaches. The only other time that happened was in the backyard.

The Billygoats Marino Mikaele Tu’u made his mark with a big try down south. He’s come a long way from Kathryn Jermaine Hall.

There were 30 penalties in the Highlanders v Chiefs match – and about the same number in the Hurricanes – Blues fixture.

Caleb Clarke, the one-handed finish. How many times did his dad and All Black Eroni Clarke do that on Eden Park?

Was there any doubt about Coles’ finish? The only attended sports event in the world was interrupted by the middle man, WHY?

Are those wearing number 19 still required for contact tracing?

Is a fend now social distancing?

It’s much better seeing a red screen crawler LIVE on Sky, slightly beyond halftime, than it is a COVID warning on the Herald.

Contact tracing or false hope? Hurricanes were never winning from 13-30 down.

Streakers at the rugby in Dunedin on Saturday night. Australia has the right idea in dealing with these people, multi-thousand dollar fines and long-term or life bans. In New Zealand these people are instead glorified in the media and slapped with pathetically light fines.

In an interview with the E Tu Whanau Footy Show on Saturday, WRFU CEO Matt Evans said that some afternoon NPC matches might be played at suburban grounds given the unavailability of SKY Stadium, Dates and matches to be confirmed.

Good for fans, less so for broadcasters.

This month’s Rugby News is out – look out for it on a shelf near you.

Whanganui the birthplace of rugby in New Zealand?

Celebrated sports author and historian Ron Palenski is offering new evidence that rugby was played in Whanganui a year before what was believed to be the first game played in this country – in Nelson in 1870.

Charles Monro is generally regarded as the one who introduced rugby in Nelson in 1870. But contrary to popular belief, Palenski told Sunday Morning rugby was first developed briefly in Whanganui the year prior to Nelson’s game before spreading throughout the country.

Last week the New Zealand Herald reported that, “in Auckland just 10 of 16 senior clubs will field premier, premier development (or B-grade rugby) and under-21 teams in this year’s competition that begins June 20 – the three staple grades of men’s club rugby”.

A fundamental reason for the fall in numbers is considered to be the influence of secondary schools in promoting elite rugby at direct cost to participation. Waitakere City director of rugby Tony Lafotanoa is reported as saying that, “there’s a remnant of boys still wanting to play, but generation after generation have been told to ignore club rugby. That sense of tribalism and belonging that used to belong to us has been pushed back to schools and the schools have shut the gates on the clubs.”

Photos. All our Club Rugby photo galleries can be found on SmugMug at: https://clubrugby.smugmug.com/2020

Thank you to all the photographers who are sideline at the games taking photos, for now and into the future as a visual record of the rugby!

Round one Swindale Shield fixtures HERE

Big guns flex their might in fifth round matches