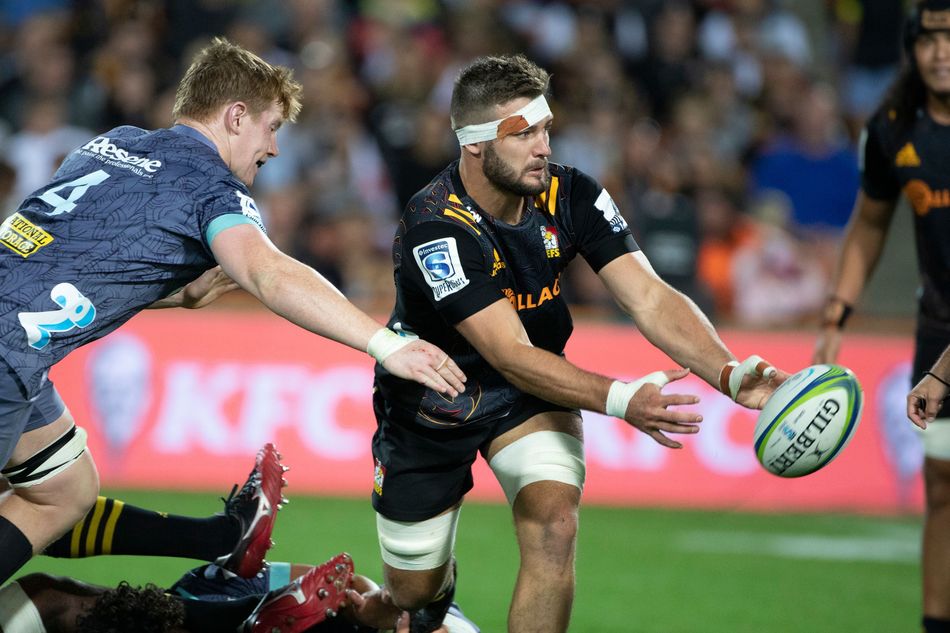 Lachlan Boshier gets a pass away for the Chiefs against the Hurricanes in March. PHOTO: Chiefs Rugby / Richard Spranger.

Lachlan Boshier was the form flanker in Super Rugby before lockdown. The Chiefs blindside was the competition’s’ leading turnover merchant and impressed Stuff’s Aaron Goile so much the Hamilton scribe acclaimed; “he’s got more turnovers than the local bakery, but more modesty than the mince pie.”

“I don’t pay much attention to the media,” Boshier curtly emphasised.

“You do hear little things – maybe they needed someone else to talk about. I was pretty keen to rip into rugby this year. The body is feeling pretty good and after a World Cup there is always a bit of a cleanout of good players, ” he continued.

Boshier produced a particularly eye-catching display on February 8 against reigning champions the Crusaders. In a stirring 25-15 victory, he produced a mammoth 18 tackles coupled with a handful of turnovers. Will such defensive dominance continue on Saturday when Super Rugby Aotearoa kicks off?

Among a series of new innovations designed to try and make the spectacle more exciting will be the stricter application of breakdown laws to create faster, attacking ball and a fairer contest.

“It’s going to be interesting. We had a little hit-out against each other the other day, had a ref come in, and tell us what the go is,” Boshier said.

“It could be a good thing, tidy things up at the ruck, and speed the game up a little bit, but it will be different from a turnover perspective.”

“You don’t have to be on the ball as long and I’m not sure if that will mean more turnovers or fewer turnovers. I’d like to think it would be more, but it will be more about winning races, the first-person there having a couple of tugs at the ball, and then getting away.”

“If you get caught in the wrong spot it sounds like they’ll blow it up straight away. It puts a big emphasis on the tackler to make a dominant tackler,” he further speculated.

Boshier has been a tenacious tackler his entire career. In 2014 he was the staring openside for New Zealand at the World Under 20 Championships in Auckland. He joined the Chiefs in 2016 where a switch to six was born out of necessity. All Blacks captain Sam Cane is a long-time occupant of the seven jersey. Ironically the pair lived together during the lockdown.

“It was a pretty interesting time. I moved in with Sam and my partner. He’s got a good gym in his garage. We trained together in the morning and cruised in the afternoon, doing our own thing. Sam’s building a new house so we did a bit of DIY and watched some good TV series.”

“Being with Sam and seeing him train closely every day made me a bit more of a professional. He does all the little things so well and it was cool to see how he goes about his work,” Boshier revealed.

Cane’s ascent to All Blacks skipper was announced while New Zealand was in Alert Level 3. Boshier was informed of the news before it went public.

“Sam just sort of mentioned it and I was pretty stoked for him,” Boshier said.

“It didn’t change our relationship at all, might have done the dishes quicker.”

The Chiefs will need to be quick to shut down the Highlanders in the opening game of Super Rugby Aotorea in Dunedin. The Highlanders poor form between February and March is a distant memory.

“You never know what they’ve got up their sleeves. Tony Brown is a clever coach. It’ll be about shutting them down,” a weary Bochier warned.

The second oldest of five kids, Boshier was raised on a dairy farm in Taranaki – a province he’s made 38 appearances for in the NPC.

Aisle be Back: Hurricanes at home against the Crusaders