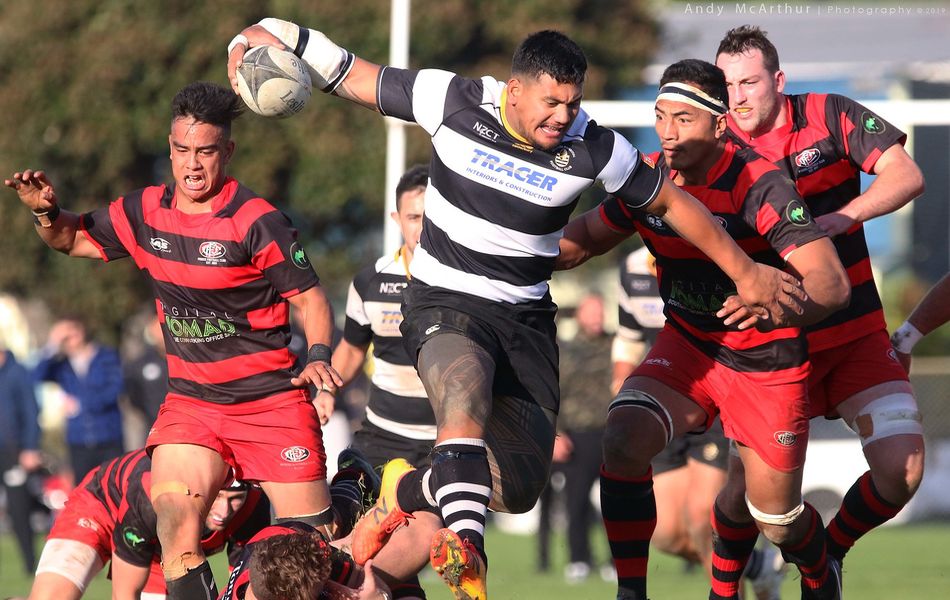 They joined forces during the war, now Poneke and Oriental-Rongotai play for the Jim Grbich Memorial Memorial Trophy annually in the first round. PHOTO: Andy McArthur.

What are the most keenly contested club rugby matches in Wellington club rugby? With the start of the club rugby season just around the corner, here is a selection of the many rivalries set to resume in 2020.

Petone vs Hutt Old Boys Marist
It’s not the oldest rivalry in the region, but courtesy of the trophy at stake between the two it’s perhaps the highest profile. Donated by Hec McBain in memory of his father Alexander – the first Life Member of the Hutt club – in the 1930’s, it’s often been played for at below the top-flight owing to the fortunes of Hutt, Hutt Old Boys, and Hutt Old Boys Marist, but since HOBM returned to the Premier grade in 2004 the Eagles have more than held their own against the Villagers, with the McBain Shield having spent the last three summers on the north side of the Hutt River.

HOBM vs Petone – a keen rivalry for the McBain Shield

Poneke vs Petone
Of the current Premier clubs, only Wellington has been around longer than Poneke (founded 1883) and Petone (founded 1885), but it is the latter two who own the longest- standing rivalry at the top level, pitting the city against the valley through the passage of boom times and bust and World Wars. It hasn’t dimmed in the slightest over that time with the contest for their FJ Tilyard Shield, which has been around since the late 1950’s, still as keenly fought over as ever.

Northern United vs Tawa
At the opposite end of the spectrum is one rivalry that’s only heated up in recent times. The dominant team of the 2000’s, Norths’ decline in the early part of this decade coincided with Tawa’s rise which culminated in Jubilee Cup success in 2013 and 2016, and in part fuelled by players who made the move from Porirua to Lyndhurst. With both now at the top of the tree and with a heavy Polynesian influence, their meetings – including that for the Sammy Saili Memorial Trophy that honours a man who played more than 200 Premier matches across both clubs – are absorbing and physical contests.

The Tawa-Norths first round clash for the Sammy Saili Memorial Trophy is a feature match on the calendar.

Marist St Pat’s vs Poneke
Only the thin strip of asphalt known as Evans Bay Parade separates the home grounds of the two Eastern Suburbs rivals, with each having their name emblazoned on a wall facing the other, and each side choosing to get changed in their own dressing room rather than venture into enemy territory too soon. The Battle of Kilbirnie is tough on the field but relatively good-natured off of it – in the spirit of former MSP captain and coach Mick Horan and Poneke legend Ken Millar for who the trophy the two sides play for is named – but those bragging rights over the other are keenly sought when they meet.

Oriental-Rongotai vs Poneke
But before MSP moved into Evans Bay, there’s been a longer standing and enduring rivalry between sides based on that side of the Mt Victoria tunnel. Geography aside, at its heart is the memory of the brilliantly talented Poneke, Wellington, and NZ Maori midfielder-turned-loose forward Jim Grbich who tragically lost his life in a motor vehicle accident in 1962, with Ories presenting the trophy the two contest in his name a few years later. Perhaps lacking some of the sting of other contests, in recent years it’s been characterised by close scorelines in their first-round matches (Ories first; 21-15, 25-28, 30-30, 20-19, 28-27), and there’s considerable pride for both clubs in having the trophy on their clubroom’s wall.

Old Boys-University vs Marist St Pat’s
For two clubs that expect to be at the sharp end, the fact that they contested the Hardham Cup final last year was a bitter pill for each. The roots of the rivalry between the two go back a long way, drawn from the historical enmity between Wellington and St Patrick’s college’s and facing off against each other across the Basin Reserve and continue to this day with players having faced off in First XV clashes, and it shows with little quarter asked for nor given.

Northern United vs Oriental-Rongotai (Women’s)
They may be the gold standard now, but a decade ago they were in very different places; Norths had won three straight titles and seven of the last eleven, while Ories didn’t even have a team. Norths won their first championship meeting in 2013, before Ories won as underdogs the next year. The Magpies haven’t failed to make the final since, while Norths lost at the semi-final stage in both 2016 and 2017, but in title
deciders the pair have alternated victories when they have met. Norths upset the favourites in 2018, while Ories extracted revenge last year. What will happen this term?

Ayesha Leti-L’iga and Ories had the better of Norths in last year’s final. PHOTO: Andy McArthur.

Old Boys-University Green vs Hutt Old Boys Marist (Colts)
With six titles in the past decade, OBU’s top Colts side have been the marker in the grade. Their major challengers have varied year-on-year, but the side that has been there more often than most has come from the Hutt Rec. HOBM have the unenviable record of being the beaten finalists on four of those occasions OBU have lifted the trophy including the past two seasons, but their sole title in that time in 2015 came at OBU’s expense when the beat the top qualifier in the semi-final and then toppled Norths in the decider.

Avalon Wolves vs Upper Hutt Rams (Under 85s)
Rather than a single enduring rivalry, that major one in the lightweight grade has evolved constantly. At the start of the decade the drawcard were the clashes between the MSP Blues and the Poneke Dogs of War which were bitter, hard fought affairs, followed by the Tawa Titans, and then the Wellington Axemen. Currently the rivalry is at the head of the Hutt Valley between the Wolves and the Rams, cemented by the Rams upsetting the Wolves in the 2018 Final which denied the latter an unbeaten season and deepened further when a stoush between the two over the weigh-in process led to their last-round JC Bowl match last season being called off before kick-off.

Hutt Old Boys Marist Barbarians vs Petone Brotherhood (First Grade)
In much the same vein as the McBain above and the “McPain” fought out by their two Presidents Grade teams, there is little love lost between the clubs’ third teams. The third tier might be waning somewhat these days, but when these two have met they’ve sought to uphold the honour of their club and for some, revive those memories of days past.

Old Boys-University’s Ruru Shield (Reserve Grade)
Though the number of teams playing for it varies, OBU’s Ruru Shield has been the symbol of supremacy amongst the club’s social teams. Named in memory of Jackie Ruru, who lost his life playing the game in 1934, it originally served as a trophy for University inter-house matches before being repurposed. When it’s at stake, the matches between the 69ers, Dead Nats, Righteous Brothers, and Pink Ginners sees mateship put on hold for 80 minutes, and nothing else matters. (Special mention to the Poneke Ruffnuts and MSP Internationals who have their own “Battle of Kilbirnie”, and to the Ruffnuts and Upper Hutt J8’s whose rivalry the author became acquainted with in a grade final several years ago)

Poneke vs Oriental-Rongotai (Presidents Grade)
Normally Presidents Grade matches are quaint affairs; an excuse for mate-ship, rugby, and a couple of beers afterwards. But there are some that have a more serious tone, like the “Hubcap” clash between Poneke and Ories which might be more uncompromising than its first-team equivalent, and where the prize is displayed in the winning sides clubrooms on a level equal to that of the Jim Grbich.