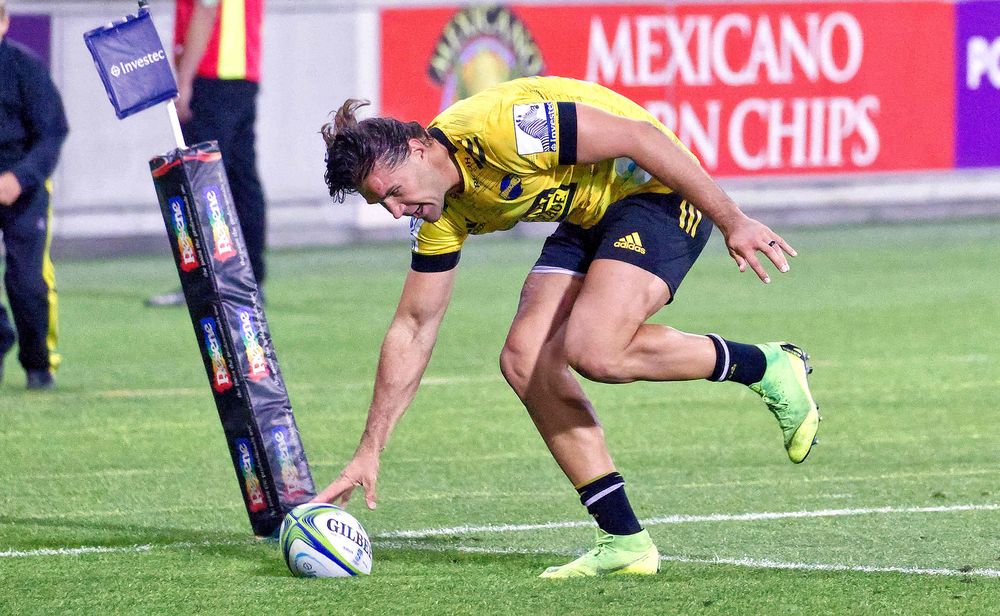 Kobus van Wyk crossing for the Hurricanes against the Blues in March. PHOTO: Mike Lewis Pictures.

Despite a coronavirus lockdown, Kobus van Wyk is seeking more time with the Hurricanes.  The 28-year old South African was signed on a single season contract but admits he’s hungry for more.

“I’m feeling right at home with the boys. My agent is busy trying to negotiate another year on my deal,” he said in a chat that was aired on Saturday on the E Tū Whānau Footy Show on Te Upoko O Te Ika

“Everyone’s excited to get back on the pitch and start playing again. It’s a massive honour to wear the jersey.”

The winger wasn’t seen often in the early rounds of the now-abandoned Super XVIII, but a  hat-trick against the Sunwolves, and a try against the Blues saw him usurp fellow South African Wes Goosen as the preferred starter. Has a rivalry developed between the pair?

“Not really, we push each other to bring out the best in each other,” van Wyk responded.

The Hurricanes returned to training last week, and though they weren’t operating at full throttle, the enthusiasm is mounting for the start of Super Rugby Aotearoa, which kicks off for the Hurricanes against the Blues at Eden Park, on June 14.

“It was a chilled first week as everybody settled back in. Everyone did their part with fitness in the lockdown. A lot of the boys got personal bests on their broncos. We are heading in the right direction,” van Wyk observed.

The Blues beat the Hurricanes 24-15 on March 7 without Beauden Barrett. It’s likely the leading All Black and former Hurricanes talisman will appear against his old team.

We just have to stop him apparently – he’s quite quick they say,” joked van Wyk.

“That’s basically the talk in the camp – just to stop him a little bit, get under his skin.”

Kobus van Wyk celebrating with fans after his try against the Blues.

Nababeep is an old copper-mining town in Namaqualand, 19 km north-west of Springbok in the Northern Cape of South Africa. It’s where van Wyk was born, the son of a coal miner and policewoman. He was a member of the South African Under 20 team that won the World Cup in 2012, beating New Zealand 22-16 in the semi-finals.

“Growing up in South Africa you watch the New Zealand teams and admire their skills. Players get a lot of freedom to do what they want and put in the hard work,” Van Wyk observed.

He joined the Sharks from the Stormers in 2017. After a bright start to life in Durban, he lost his place in the starting lineup to Springbok wings Makazole Mapimpi and Sbu Nkosi. He was lured to New Zealand by former Hurricanes mentor John Plumtree who spent over a decade in the Republic.

Centre is another position van Wyk can fill?

“I played centre at school and moved to wing for the Stormers where I made my mark. I’d love to play centre again,” he said.

“I think South African teams might join the Pro 14, but I’m not sure. That’s a tough question,”

“I think it’s best for players at the moment to stay home and put family first before the money. This situation isn’t easy.”

Aligned to Petone in club rugby, van Wyk hinted he could appear for Manawatu in the Mitre 10 Cup with talks between his agent and the union underway.

Gazing into a crystal ball a Turbos team possibly containing All Blacks Aaron Smith, Aaron Cruden, Ngani Laumape, and Jackson Hemopo alongside leading Super talents like Otere Black Jamie Booth, Liam Mitchell, and van Wyk could be quite a handful in the NPC, even despite the absence of a development team in 2019.

All going well, the 2020 Wellington club rugby season is set down to start on Saturday 20 June. Tune in to 1161AM or 87.6FM or download the app on your mobile at https://play.google.com/store/apps/details?id=tunein.player  to listen to live commentaries, interviews and local rugby talk on Saturday afternoons.

Teams primed for second round Jubilee and Hardham Cup matches