Skip to content
You are here
Home > Club Rugby > From the vault: 10th round matches in photos 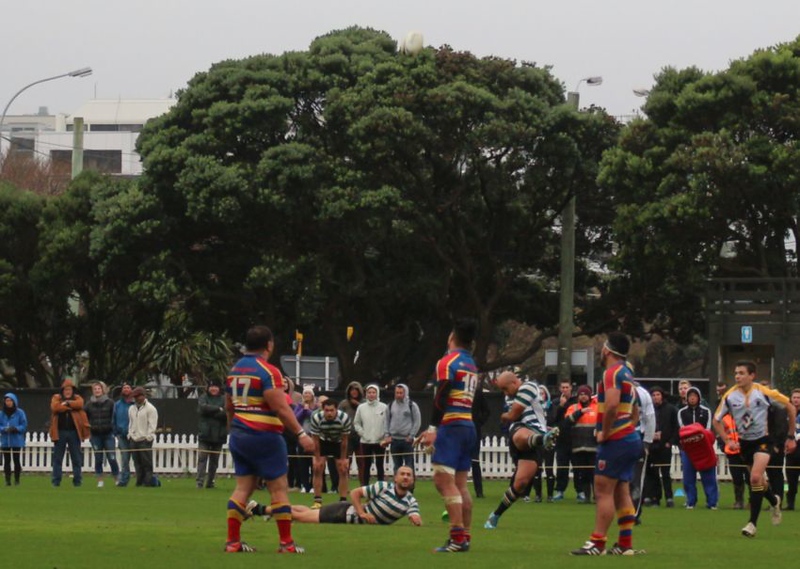 Above: OBU’s Greg Mullany sends over the winning kick at the Basin Reserve in their 18-16 win over Tawa. If Tawa had won they would have retained the Swindale Shield, finishing runners-up to MSP the following week.

The 10th and, in the past two years concluding, round of the 2020 Swindale Shield was originally scheduled this Saturday.

The rugby community remains sidelined, as the country comes back from Covid-19 lockdown.

We are now at Level 2, with much hope we will be playing again by back end of June.

Until then, here are some images from our photo galleries vault of 1oth round club rugby matches in recent seasons.

2003: Northern United’s Anthony Perenise and MSP’s Peniasi Tokakece tussle in their penultimate round match that saw Norths win 17-7 and move closer to winning their first Swindale Shield. Norths just had to beat Wests the following weekend to claim the spoils (which they did). PHOTO: Dominion Post.

2008: All Blacks John Schwalger and Piri Weepu embrace following Schwalger’s try for Norths against Wainuiomata at Porirua Park. Norths won 9 tries to 1, with wing Sinoti Sinoti scoring a hat-trick for the victors and second five-eighth Michael Lealava’a crossing for the vanquished. Norths finished second to MSP in the first round of 2008, while Wainuiomata were ninth.

2011: HOBM right wing Taleta Tupuola scorches through to score one of two tries against Wests. HOBM won 47-27 and went on to finish third the following week ahead of Wests who were 10th.

2012: Marist St Pat’s halfback Peter Sciascia leads a group of Tawa players to the race for the ball in their penultimate round fixture at Lyndhurst Park. MSP won a thriller 20-17, but it wasn’t quite enough to upstage first round champions Hutt Old Boys Marist for the 2012 Swindale Shield. MSP (second) and Tawa (seventh) both made the top flight Jubilee Cup that followed.

2013: Tawa hold a 20 point lead as the second half unfolds against HOBM at the Hutt Rec. The Eagles came back towards the end and Tawa’s final winning score was 23-17. They just had to hold off MSP the following week at home to claim their maiden first round title – which they did with a 29-29 draw.

2014: A tight battle in the mud at the Petone Rec between Petone and Oriental-Rongotai for the Jim Brown Memorial Shield. Visiting referee Mike Lash awards Petone the winning try, to see them win 23-12. Petone (third) and Ories (sixth) both safely qualified for the Jubilee Cup.

2016: Wellington’s James So’oialo makes a charge towards the 22 against Poneke on Ruck Cancer Day. Wellington won the fixture 35-13 to win the Spud Lindsay Memorial Trophy. The competition was extended to 14 teams 13 rounds this year, but the Axemen went on to finish third in the Swindale Shield.

2019: When Petone beat Poneke 23-17 at the Petone Rec to win the FJ Tilyard Memorial Shield.