Skip to content
You are here
Home > Club Rugby > This week in club rugby history: 11- 18 May 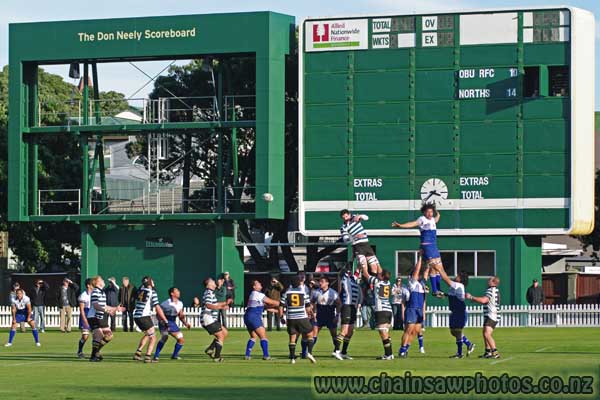 1994: Underdogs MSP beat Petone 18-15 to win the Swindale Shield in tonight’s midweek final under lights at the Hutt Recreation Ground. MSP lead 15-3 at halftime and, led by flanker Gordon Simpson, hold on throughout the second half.

1996: Upper Hutt celebrate their Old Timers’ Day and captain Loni Katoa’s 145th and last match for the club with an 18-15 win over Petone. Katoa and wing Craig Foster score Upper Hutt’s first and second tries en route to a winning 18-6 halftime lead. Of note, Petone have Hurricanes players Tana Umaga and Tim Mannix arrive at the start of the match by helicopter and both come off the bench in the second half.

1973: Unbeaten Petone account for Poneke 54-4 and they have now scored 244 points and conceded 40 in six matches this season to date.

1984:  Fullback John Gallagher scores 20 points for Ories in their 40-13 win over Titahi Bay to become the first player to reach 100 points this season and wing Steve Haturini scores a hat trick in Wellington’s 41-12 demolition of Western Suburbs.

1990: Upper Hutt remain unbeaten and hold their position at the top of the table after drawing 15-15 with Avalon at Maidstone Park in round seven.

2012: HOBM left wing Leka Tupuola is the hero for the Eagles scoring two tries in the shadows of fulltime to give his side a 27-22 victory over previous joint leaders Upper Hutt. Tupuola finishes off a length of the field try to see HOBM draw level at 22-22. He scores again at the end to take the match away from Upper Hutt at the death. HOBM go on and win the Swindale Shield.

2018: Tongan halfback Tomasi Palu (on Jonah Lomu’s birthday) scores four tries in OBU’s 48-16 Wood Cup win over HOBM at Nairnville Park in a match between the two Swindale Shield contenders. The halfback is in the right place three times after powerful forward surges and supports a breakout by fullback Sam Reid in the first-half. Elsewhere, the Avalon Wolves upset Marist St Pat’s 27-19 at Evans Bay Park for the Joe Aspell Cup while Paremata-Plimmerton lower Poneke’s flag 25-11 at Ngatitoa Domain.

1989: Poneke go nine from nine with a 25-13 win over Petone for the F.J Tilyard Shield. Poneke trail Petone 14-13 at the break but come back to win the second half 21-0. Fullback John Jackson scores 13 points to take his season contribution to 106. Poneke’s next opponents are Wellington who have a solid win over Upper Hutt.

1995: Harlequins score 20 points in as many minutes and hold on gallantly to defeat Tawa 30-26. In two other thrillers, Poneke come back from 9-16 down at the break to beat Ories 24-22 in the Jim Grbich Shield match and Johnsonville midfielder Soro Ramacake scores 18 points in their 28-22 win over Stokes Valley.

2006: Another week and another remarkable win for Hutt Old Boys Marist on their Old Timers’ Day, maintaining their unbeaten record at the top of the table after 7 rounds with yet another amazing come-from-behind win, this time pipping Tawa with the last act of the game to win 22-20. HOBM win with a converted try to wing Dennis Unasa, after a 10-minute assault, converted from the sideline by fullback Mike Kingsbeer.

2017: Oriental-Rongotai hold off Marist St Pat’s 32-27 to pull 16 points clear of the ninth placed team and become the first team to officially qualify for this year’s Jubilee Cup. MSP first five-eighth Fa’atonu Fili plays his 200th match for the club since his debut in 2001 (plus a season at Ories in 2013) at the Polo Ground.

2016: Wellington club rugby’s inaugural RUCK Cancer Day. All 14 Premier sides and other lower grade sides and referees take the field wear purple socks as part of former Poneke player and now manager Evan Belford’s initiative following the passing of friend and 200-game teammate Misiluni Moananu last year. Poneke lose to Wellington at home, while across the road, MSP’s 25-17 win over Petone is significant as it all but relegates the Villagers to the Hardham Cup for the first time in 20 years.

1954: Poneke halfback Alby Makeham is the standout player in his side’s scrappy 16-8 win over Hutt in their top-of-the-table clash. Elsewhere, Petone’s Don McIntosh is the Player of the Match in their 12-9 lowering of defending champions University, while Marist overcome a deficit to force a 14-14 draw with third placed Taita.

1953: Defending champions University blow Onslow away 14-5 in the Athletic Park wind to now be the sole unbeaten team four weeks into the season. In a close round four of the five other matches are decided by within three points (the value of a try).

1970: University wing Graham Wallis scores five tries, two penalties and five conversions for 31 points in his side’s 46-5 win over Ories. University are neck-and-neck with Petone at the top of the Swindale Shield after Petone beats Hutt Old Boys 22-16 for the McBain Shield.

1998: Johnsonville surge to the top of the Swindale Shield standings, storming back to beat Tawa 32-18, while Wests end Petone’s run of eight wins, beating them 16-5. Meanwhile, Poneke first five-eighth James Ogden scores all his team’s points in their 19-13 win over Upper Hutt.

2009:  The 2009 Swindale Shield takes a dramatic twist with previously unbeaten Petone stumbling to its first loss of the season, against seventh placed Upper Hutt to throw the title race wide open with just three rounds to play. Giant killers Upper Hutt defeat Petone 22-19, who are now joined at the top by Poneke who ease to a 66-5 four-try bonus point win over competition strugglers Avalon.

1952: Grandstand finishes characterise the early weeks of the season and Onslow’s 11-9 victory over Hutt in today’s main game at Athletic Park continues the pattern. Hutt score on fulltime but the conversion to equalise sails wide and Onslow hold on.

1958: University go a long way towards winning the Jubilee Cup later in the season by beating a highly rated Onslow 11-9. University has to hold on in an epic finish with goal kicking lock Jim Kinvig missing a late conversion that would’ve tied up the scores. Later in the season these teams fight out a 6-6 draw.

1975: Poneke shock previous frontrunners Athletic 18-7 and Petone defeat MSP 14-12, giving Petone a one-match jump on the rest of the field with a month to play in the Swindale Shield. At Kilbirnie Park, Poneke centre Grant Griffiths kicks four penalties and a conversion to send Athletic packing.

1978: Petone fullback Allan Hewson is thought to have scored the fastest century of points in the history of Wellington club rugby, after scoring 18 points in his side’s win over WCOB. Hewson sits on 106 points in eight games. Elsewhere, MSP earns its 30th consecutive competition win in beating Upper Hutt 47-12.

1986:  Leaders Petone find their poise in scoring 30 unanswered points to punish Western Suburbs 37-9 , Lolani Koko scoring a hat-trick and Matt Lee two tries, while Wellington are in second after demolishing Porirua 36-6 and Upper Hutt slip to third after drawing 3-3 with WCOB.

1997: HOBM maintain their unbeaten record in the Swindale Shield with a comfortable 33-13 win over Norths. Petone are clearly second after beating Wellington 36-26, while seven teams are now within five points of each other with three rounds to play before the commencement of the Jubilee Cup.

2008: Old Boys-University are within sight of their first Swindale Shield title after beating Northern United 37-26 in an absorbing round eight encounter at the Basin Reserve. OBU’s four try bonus point win over Norths sees them move into the outright lead, four points ahead of defending champions Norths and one ahead of Marist St. Pat’s who have leapfrogged Norths into second after winning 29-0  against the Wests Roosters at Evans Bay Park. OBU got on to lose in round 10 to Petone and MSP win the Swindale Shield.

From the vault: eighth round matches in photos