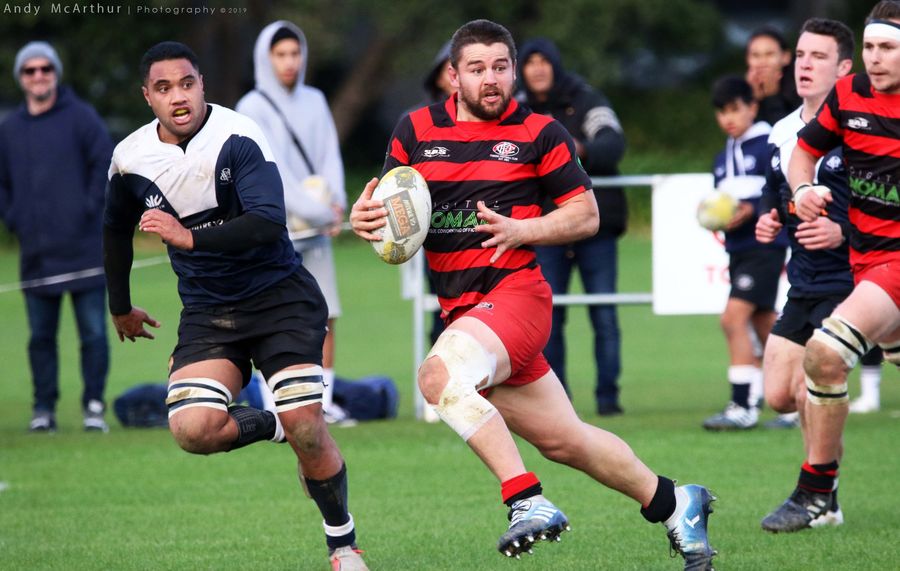 Above: Dane Coles playing for Poneke in his most recent club match, last year against Petone. PHOTO: Andy McArthur.

There’s little that Dane Coles hasn’t achieved in rugby. A World Cup winner in 2015 with 69 All Blacks caps on his resume, he is also a Hurricanes centurion with the 2016 Super title to show for his long toil. The unusually skilful hooker has arguably changed the way in which his position is played.

Ravaged by injury the past three seasons, and with professional sport on hold due to the Corona Virus, Coles could easily disappear with his legacy as a great already secure, but he is determined to depart on his own terms, despite the setbacks.

“The injuries are very frustrating, especially the concussions. No one has the answers. At least with a knee injury you have an idea when you will be back playing,” Coles mourned.

“What drove me through this time was my love of playing and wanting to get back playing for the Hurricanes and the All Blacks,” he told the Huddy Hui.

“I want to end my playing career on my terms. That is what has kept me driven and working through those injuries and doing what I could to get back on the field.”

Coles’ struggle with concussion led to some earnest discussions with his wife about the future, all day headaches were common.

“I would do 30-minute bike rides and then be at home for eight hours just exhausted. I couldn’t do weights for a couple of months – so not being able to train was probably the hardest part.”

Rugby will return next month and Coles is fully fit and raring to go. Despite playing before empty stadiums Coles is determined to show the quality which has made him an essential part of the New Zealand rugby fabric for a dozen years.

“It is definitely going to be weird. But I think with what has happened we are very grateful to get the chance to get out there and play rugby again and represent ourselves, our teams and our fans. Hopefully we can put a smile on people’s faces,” Coles said.

Coles has been making rugby fans smile since 2012 and reminisced thoughtfully about his time at the top.

How has the role as a hooker changed in his time?

“When I made the All Blacks in 2012 their game plan suited the way I played the game. I have always tried to have a go with the ball in hand and timing was a crucial part in my initial selection.

“When I first made the Hurricanes I had Andrew Hore, who was a great mentor for me, and I got to learn off him. Then making the All Blacks I had Kevin Mealamu, so I was lucky in that department to have those guys to learn off.

“But you are always learning – I have a great relationship with Codie Taylor. Other contemporaries like Ricky Riccitelli and Asafo Aumua I have to hand on what I have learned to them. The mentality of not telling the young fella anything is gone, and helping those guys out so they can become the best hookers they can be is what it is about.”

How does Coles separate winning Super Rugby and the Rugby World Cup?

“It is hard to separate them, they both mean the same as each other in their own way.

“With winning Super Rugby, it was a home grown feeling, and not having won it ever before made it massive. Winning the World Cup with the All Blacks is the pinnacle of the game so it doesn’t get any better than that.”

Defence was a big factor in the Hurricanes’ 2016 title win?

“We needed to beat the Crusaders in Christchurch with a bonus point and rely on other results to finish top of the table, and to have the rugby gods on our side and to achieve that was special.

“John Plumtree was the defence coach, and together with Cory Jane and TJ Perenara our winning system was implemented.

“It was all about line speed. Getting up and putting pressure on the opposition and forcing them to make hurried decisions.

“It was something we had been working on all season. By the quarter-finals it was humming, we knew what it was about, we knew what our job was and we had a good system in place. It was a massive part in us winning that final.”

How different are the systems between the Hurricanes and the All Blacks?

“The systems are a lot different, so you have to put the work in to transition. Every team has got the same kind of defence system now, so that is easier. But it is more the language that we use that is different. So you have got to do your homework. A lot of it is all about the lingo that changes between teams.”

Coles operates the All Blacks’ lineout with two of the best, Brodie Retallick and Sam Whitelock.

“They are two world class locks, so it is pretty special. Being in the changing room and seeing Sam’s or Brodie’s face because you know they have got your back. Kieran Read had a massive part in the All Blacks, and is very smart, and it makes it easier knowing you are throwing to them in the lineout.”

Coles went into the international rugby trenches with both recently retired All Blacks captain Kieran Read and his predecessor Richie McCaw, how did their captaincy styles compare?

“Both are exceptional team players. McCaw was probably more in that old school mentality, but with the things he used to do on the field he wasn’t one of those guys you wanted to ever let down.

“Read was very similar with the way he played, but his strength was his inclusiveness in the way he led players and incorporated the new generation of players into the environment.”

What will Sam Cane bring to the All Blacks captaincy?

“I have played a lot of rugby with Sam Cane and he thoroughly deserves to be the All Black captain. He is very physical, had a great presence about him and is well respected among the team, which is a big thing about that role.”

Does Coles have a favourite try he has scored?

I love my league, so I always wanted to score a try at Suncorp Stadium [Brisbane]. I scored one for the All Blacks against the Wallabies, a sneaky one down the sideline, so that is one of my favourites. It is hard to separate them all though.

What opponent gets under Coles’ skin the most?

“Probably Stephen Moore, we used to have some good battles!

“He was a good man off the field, but he used to get stuck into me on it.”

Coles started his career playing club rugby in Wellington – first for Marist St Pat’s and latterly for nearby Poneke.

He credits influences and early experiences gained at club level on his professional rugby career.

“I don’t think I would be where I am today if it wasn’t for Poneke.

“I always try and get back when I can, and am very thankful for the part they have played on my career.

“Richard Watt and John Jackson were the coaches when I first went over to Poneke and both have been massive in helping me. I have spent a lot of time with Watt with the Lions and Hurricanes as well.”

Coles explained his start at MSP.

“Coming from Paraparaumu and joining Wellington College in my last year of school I had no affiliation with a Wellington club.

“I was living with my uncle and auntie in Lyall Bay. My uncle was a Marist man and he said if you come and live with me you have got to play for Marist. So I played for them for a couple years before seeing the light and moving over the road to Poneke!”

I am not 100 percent sure what I will do. But I am definitely moving home to the Kapiti Coast to retire and just be normal for the rest of my life.

I don’t want to coach professionally, but I would like to give back in the future coaching a Colts or school team.

Club rugby, Hurricanes and All Blacks fans hope that is a little while off yet.

The Huddy Hui airs on Facebook 8pm on Wednesday nights.