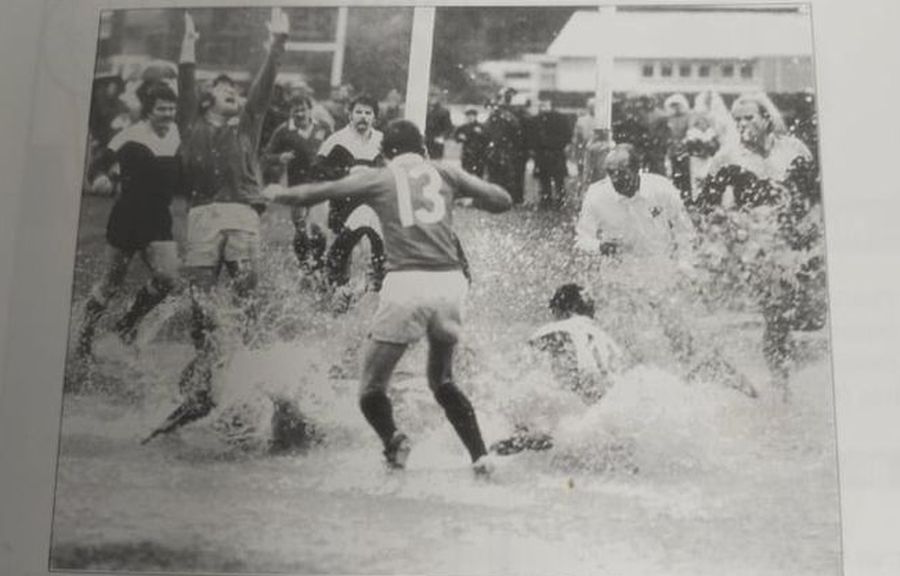 Above: Marist St Pat’s midfielder Murray Tocker crosses the line for a try that wasn’t in the 1980 Jubilee Cup final against Petone. PHOTO: Evening Post.

All rugby roads led to the Petone Recreation Ground for the Jubilee Cup finale on 16 August 1980, between Petone and Marist St Pat’s.

The non-neutral venue was just one of several incidences and talking points that makes this a Club Rugby Classic Match.

Both clubs were clearly the top two teams of the day, destined to meet in three consecutive finals between 1979-81.

As was the case prior to 1993 when the playoffs were introduced, the final was more a season decider than a final. Union officials generally got it right most seasons when doing their second round draws by ensuring that the leading two teams would meet on the final afternoon for the sought after Jubilee Cup silverware.

MSP were the defending champions and first round Swindale Shield winners. In fact they came into the game on a 42-game winning streak  an impressive record in any sports competition.

MSP were also going into the match farewelling talisman hooker and captain Kevin Horan, while coach Brian Coulter was also bowing out (later to return to MSP after a stint overseas).

MSP had beaten Petone in the first round as they defended the Swindale Shield title that they had also won in 1977 and 1979.

This final was scheduled to be played at Petone because Wellington was playing Auckland the next day at Athletic Park and officials wouldn’t entertain games there on successive days.

Both teams were stacked with representative players, several of whom backed up the next day against Auckland.

Then there was the conditions. The day was appalling. A strong northerly blew down the Hutt Valley while parts of the ground including the in-goals were practically underwater following heavy rain.

Current WRFU President Murray Blandford was in his second season in the saddle at first five-eighth for Petone.

“This game was probably the highlight of my career as far as rugby goes, due to the occasion,” Blandford reflects.” My first season had been in 1979 and we played twenty games, won 18, and only lost 2, both to MSP, so didn’t win anything.

“It was an incredibly wet day and the Rec was underwater. Funnily enough, when our captain and hooker Frank Walker won the toss and chose to play into the wind I had a feeling we could win the match.”

With the conditions in their favour, MSP came out with a full head of steam and attacked the tryline with all they had, which was considerable.

The closest they came to scoring was second five-eighth Murray Tocker crossing in a splash for a try that wasn’t.

“Yes it was, I had the ball in two hands and was on the tryline,” Tocker enthuses.

“The issue was the whole in-goal area was underwater and there was too much water for the referee Graham Harrison to see that!

“Graham came around and he could see me with the ball but he had already blown his whistle for a 5-metre scrum.”

“We couldn’t score from the resulting scrum either. Perhaps if we had taken these early chances things might have been different.”

If they had broken through at that stage, Tocker would have lined up the conversion from 15 metres to the right of the posts. Assuming he kicked this (for the sake of this story) and also the penalty that he did kick this would have given MSP a 9-point lead at halftime.

Now with the wind, Petone fullback Allan Hewson kicked two penalties midway through the second half to put Petone ahead 6-3.

Then came the match-winning try with a few minutes to play, as Blandford describes:

“I kicked the up and under that led to centre Ross Baker scoring the match-sealing try, after Hewey had kicked those important penalties. It was an amazing last six or so minutes as we knew we couldn’t lose the match with the strength of the northerly on the day.”

Tocker was close to the action for this try too.

“The ball landed in a pool of water in the in-goal area and Ross won the race between a group of us players to the ball.”

Hewson’s conversion made it 12-3 to Petone and there was no coming back for MSP with just a few minutes to play.

“To beat what was a special MSP team was incredible, and on a day like that, obviously our forwards were the heroes, and the key to our victory, as it was virtually impossible to pass the ball much outside of the halfback,” Blandford says.

“I still remember the amazing reception we got at the clubrooms, which were packed.”

Blandford says the players in Petone’s squad are still tightknit. “Most are around, including the try scorer Ross Baker, who lives in Eastbourne. Tera Arthur, Kevin Macaulay, and Dave Andrews have all passed on.”

“That was the end of our long winning streak. We had a powerful team that came together well. Personally, I was normally a fullback but played most of that season at second-five outside Tu Wylie.”

Outgoing MSP coach Brian Coulter summed up the defeat in the Dominion on the Monday following the match: “We had to get beaten sometime, but I’m just a little sorry it had to be in the cup final.”

The MSP and Petone teamlists on the day, as advertised in the Rugby Weekly

Tocker also notes that the Auckland NPC team were interested spectators in the Petone Rec grandstand.

The next day at Athletic Park Wellington beat Auckland 10-4. Athletic prop and former WRFU President Kevin ‘Butch’ Phelan scored the only try of the match and Petone fullback Hewson kicked a dropped goal and a penalty.

As a footnote, MSP and Petone met in the following year’s Wellington club rugby decider, back at headquarters at Athletic Park.

Tocker ran 50 metres to score a clear-cut try, while flanker and newly appointed Wellington Lions captain Paul Quinn crossed the whitewash for the match-winner in a 14-10 win for MSP.

The rivalry between the two clubs continued throughout the remainder of the 20th century, but 1997 was the last year MSP and Petone have contested the final.

The Wellington and Auckland teams that met on Athletic Park on 17 August 1980, as advertised in the Rugby Weekly.

Norths and OBU to meet in Jubilee Cup final