Skip to content
You are here
Home > Club Rugby > This week in club rugby history: 27 April – 3 May 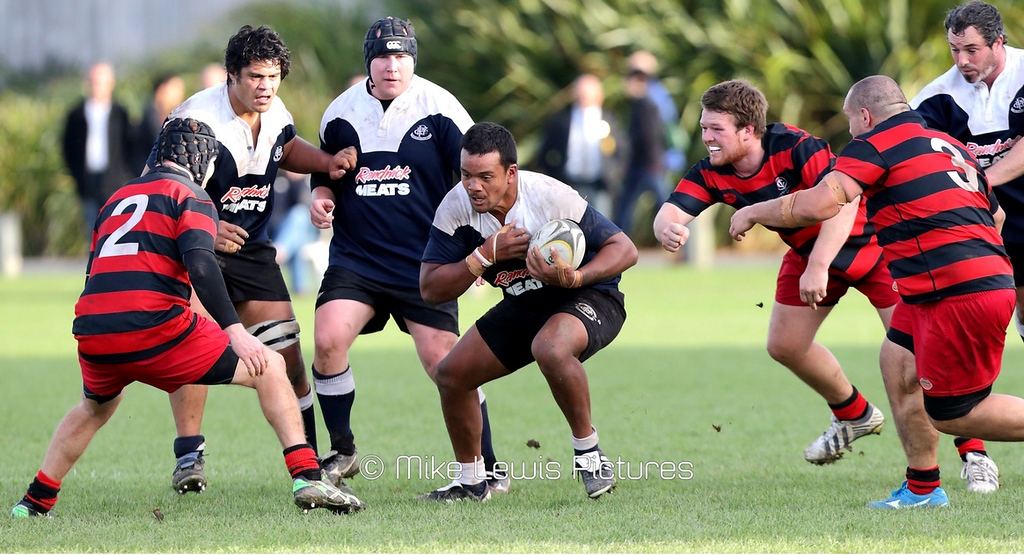 Above: When Petone edged Poneke 25-24 in 2013 in their Swindale Shield and F.J. Tilyard Shield match.

2002: Avalon’s Mano Flutey kicks a penalty on fulltime to see his side beat Wests 11-10 in atrocious conditions to extend Avalon’s unbeaten run to six.

1973: Petone right wing Vern Winitana scores four tries in his side’s one-sided 43-10 win over Onslow. Winitana has now scored tries in Petone’s first four matches and they their rollicking start to the season has seen them 155 points and concede 30.

2007: Upper Hutt overtake Wainuiomata with a last-gasp try to win 19-17 and register their first win of the season. Halfback Daniel Beckett proves the hero in the shadows of fulltime, charging down a clearing kick and scooting over in the corner for the winning try. Old-Boys University and Hutt Old Boys Marist fight out a 15-15 draw at the Basin Reserve, with HOBM coming from 10-15 behind to draw the contest with a length-of-the-field try.

2018: Derby Day in the Swindale Shield and four of seven matches are thrillers. Marist St Pat’s inflict the first defeat of the year on Hutt Old Boys Marist, beating the Eagles 28-26 for the Father Cleary Shield. MSP have had their noses in front throughout but their Old Timers’ Day supporters breathe a collective sigh of relief when Eagles first five-eighth Glen Walters’ sideline conversion at the end to equalise misses. Elsewhere, Petone and Wainuiomata draw 26-26, The Upper Hutt Rams hang on to beat Avalon 31-26 and Poneke beat Oriental-Rongotai 28-25 in their Jimmy Grbich Shield match.

1961: Marist fullback P.C. Dellabarca kicks five conversions and a dropped goal and scores a try for 16 points in his side’s second round 43-3 win over Taita. Elsewhere a feature of University’s 8-0 win over Poneke is a 55-yard penalty into a strong wind by standout fullback Mick Williment.

1955: After accounting for Wellington College Old Boys 34-8 in last week’s opening round, Petone dispatch Taita 31-3.  A feature of this win is ex All Black fullback Bob Scott scoring a try and converting four of Petone’s seven tries.

1966: University are going to be Jubilee Cup champions later in the year, but are downed 6-19 by Wellington. Wellington’s forward play is more cohesive than University’s and flanker Graham Williams and first five-eighth Mattie Blackburn are standouts.

1976: The Wellington Axemen are the only unbeaten team thus far, following their 33-7 win over Naenae Old Boys. Captain and flanker Graham Williams scores a hat-trick, while new Wellington representative No. 8 Murray Mexted stands out.

1993: Petone and Wellington first five-eighth Simon Mannix hops off a plane from Italy to score a try and two penalties to give Petone a 26-14 win over Harlequins and steer them into next week’s Swindale Shield final against Poneke.

1999:  NZ 7s representative Brad Fleming scores a hat-trick in Tawa’s 37-10 win over Johnsonville for the Carman Cup; Petone defeat HOBM 32-16 for the McBain Shield; and Norths duo Junior Malagi and Jerry Collins are key players in their 30-3 win over Avalon.

1987: WCOB first five-eighth Steven Pokere stars in his team’s 22-6 win over Poneke for the Beet Algar Rosebowl. The White Tigers lead 12-3 at halftime at the interval and pull clear in the second spell. Elsewhere, Andrew Smids kicks a whopper 70-metre penalty in the first minute of Upper Hutt’s 12-6 win over University.

1998: A superb defensive effort gives Poneke a 9-8 win over Western Suburbs, but in a bizarre finish both teams think they have won afterwards. Wests captain Wayne Brill and Poneke skipper Richard Watt both raise their arms in triumph upon the fulltime whistle. Wests go on to win the Jubilee Cup. Defending first round champions Johnsonville beat Harlequins 27-19, thanks to a brilliant solo try to Ali Koko.

2005: Upper Hutt confirms themselves as Swindale Shield favourites by beating Northern United 10-5 in this top-of-the-table round five clash. Norths score first but Upper Hutt come back with a penalty and a converted try to fullback Cory Jane after a quick tap. Upper Hutt’s forwards smash Norths in the set-pieces, keeping out a late rally.

1952: Red-hot University are beaten in the forwards by Onslow, but survive on scraps to overcome Onslow 13-8 courtesy of scoring a last-minute try. Jim Fitzgerald combines with Ron Jarden to turn a certain draw into a win for the students.

1975: Athletic storm to a 22-12 win over previously unbeaten Petone in this fifth round clash. Petone had jumped to a 12-0 lead after 15 minutes but Athletic fullback Brian Cederwall drops a goal and kicks three penalties to claw the points back. . Elsewhere, young fullback Murray Tocker scores all his side’s points in Hutt Valley Marist’s 13-4 win over soon-to-be champions Poneke.

1986: The Andy Leslie-coached Petone team fight back from 9-18 down at halftime to beat Poneke 42-18, to remain the only unbeaten side after six rounds. Allan Hewson scores 30 points. Petone have scored 193 points and conceded 51 to date this season.

2003: Swindale Shield strugglers HOBM win the McBain Shield off Petone, prevailing 22-20 after being down 0-15 inside 30 minutes. A converted try to Doug Power, converted by tyro halfback Piri Weepu, lift them and they surge ahead.

2013: Tawa win their sixth win in seven matches, over a spirited Old Boys University, scoring the winning try late and then holding on to win 22-19. Rimutaka grab headlines for the wrong reasons, losing 0-127 to HOBM and the scoreboard short circuits. Petone edge Poneke 25-24, Wainuiomata beat Marist St Pat’s 31-24 on MSP’s Old Timers’ Day and Norths account for Wests by the 97-48 in a free-wheeling fixture.

From the vault: 10th round matches in photos