Skip to content
You are here
Home > Club Rugby > From the vault: SIXTH round matches in images 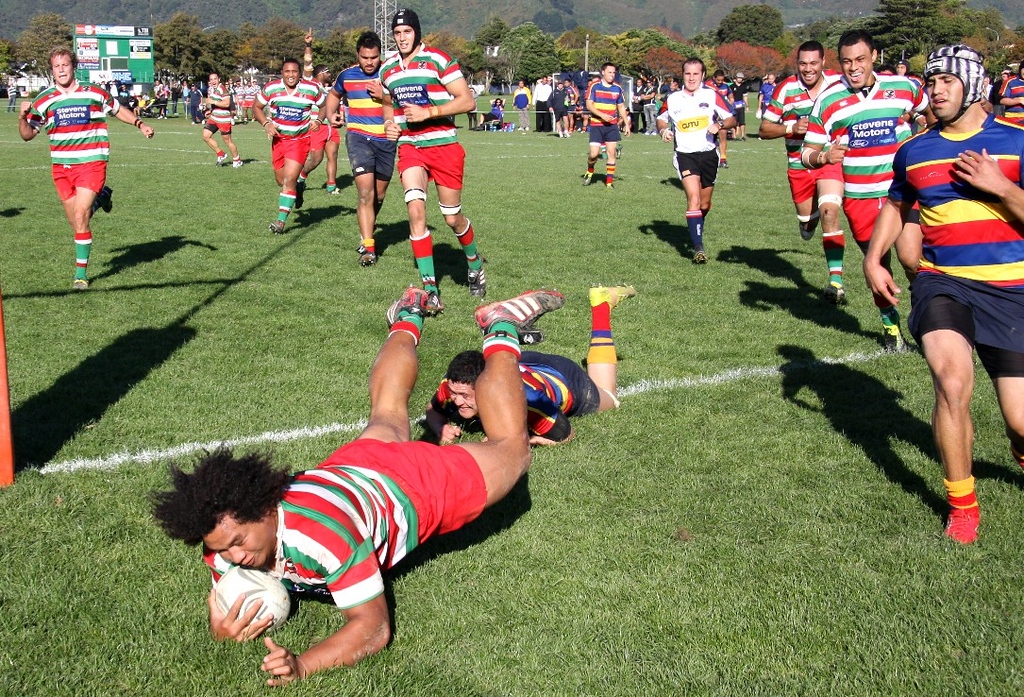 Above: Hutt Old Boys Marist loosehead prop Simon Malaeulu crosses for a popular try on the Hutt Rec against Tawa in the sixth round of the Swindale Shield in 2011. HOBM won this game 27-10 and went on to finish third in the Swindale Shield, while Tawa were 10th of 12 teams. In the second round HOBM were beaten Jubilee Cup semi-finalists and Tawa won the Hardham Cup. PHOTO: Warwick Burke.

The sixth round of the 2020 Swindale Shield was originally scheduled this Saturday, on ANZAC Day.

But the rugby guns remain silent as Covid-19 ravages the sporting nation.

Below are some images from our photo galleries vault of sixth round club rugby matches in recent seasons.

2004: Poneke fullback David Palu scored two tries in his side’s 25-20 win over Avalon. Here he evades the tackle of Owen Jackson on his way to one of his tries.

2010: Northern United No.8 Mana Faraimo sets off from the back of the scrum against Old Boys University at the Basin Reserve. Norths won 54-7, 8 tries to 1, and went on to win the Swindale Shield and the Jubilee Cup this year.

2013: Marist St Pat’s first five-eighth Andrew Wells in space against Northern United at Evans Bay Park. The match was tight in the first half and the then defending Jubilee Cup champions MSP led just 5-3 at halftime. But it exploded soon after and MSP went on to win 22-13.

2014: Tight tussle. Wainuiomata lock Bevan Clarke crashes over to score a clutch try in his team’s 30-26 Bill Jones Cup win over Wellington at home at William Jones Park. Wainuiomata slipped into the championship Jubilee Cup round in eighth but went on to reach the final for the first time where they met HOBM.

2016: Belgium Tuatagaloa scores in the corner for Petone, but this try wasn’t enough to prevent a thrilling 33-27 Darren Larsen Cup win for Wainuiomata over Petone.

2018: Hooker Josh Houston-Tupou threading his way through traffic for the Upper Hutt Rams in their 26-22 win over Wainuiomata for the Peter Jones/Dave Ritchie Cup. The Rams came back in the second half after trailing by 10 points at halftime.

2019: Flanker Jordan Gillies and teammates celebrate his try to help clinch a 46-26 win over Petone for the McBain Shield. Photo: Andy McArthur.