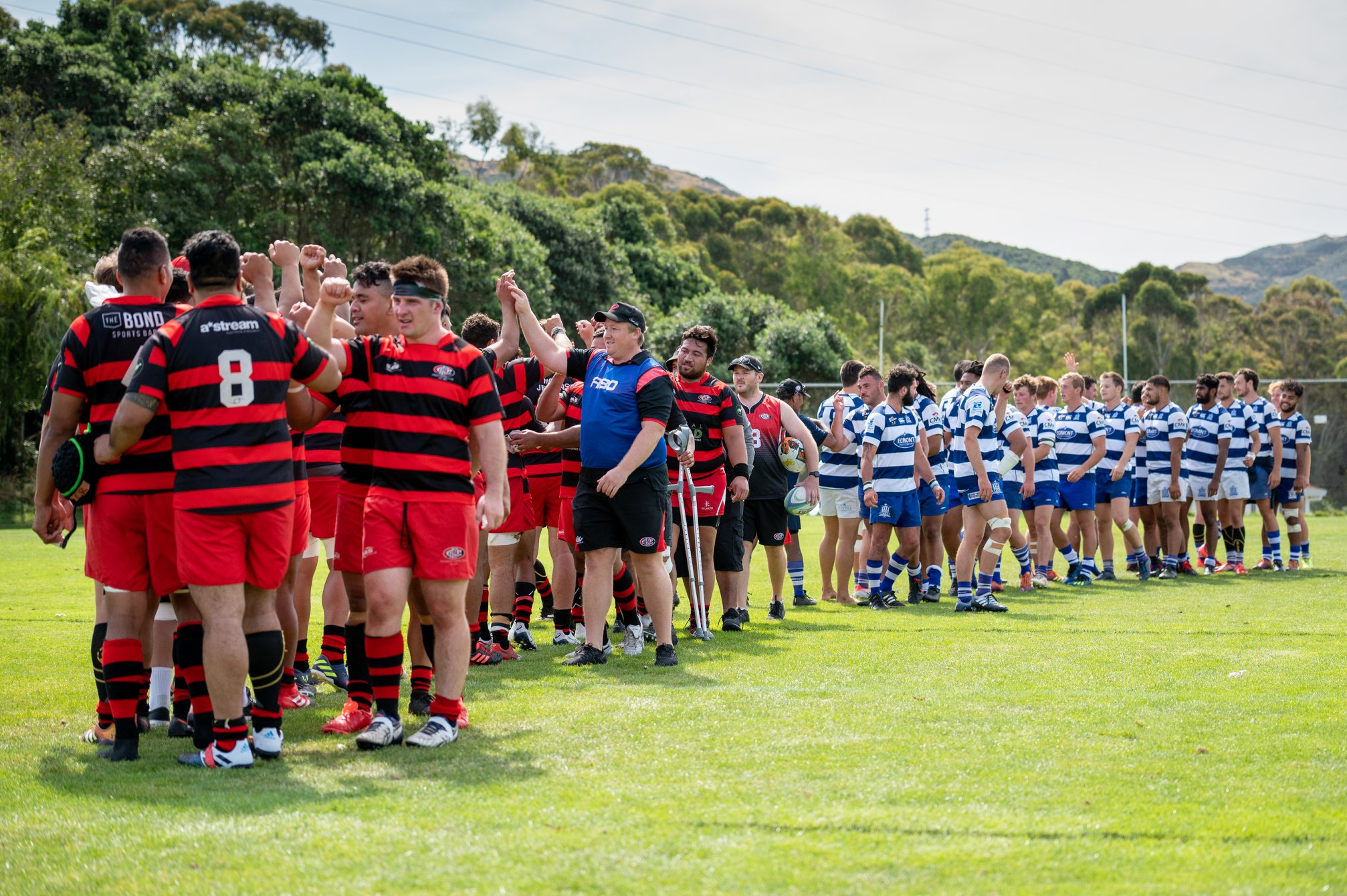 Fulltime in the Poneke-Tukapa pre-season match for the Zemba Cup was almost two months ago. Players and supporters alike are hoping for some rugby soon. PHOTO: Tom Minton.

Further detail will follow in due course regarding Contact Tracing and how this system will be applied to our community rugby environment. Please refrain from seeking/purchasing any solutions in the meantime whilst this is worked through

While the move back to normality commences with this coming Monday night’s move to Level 3 on the Covid-19 response chart, rugby will remain dormant.

Sports that involve contact and close proximity – think not just rugby, but also football, league, netball, basketball, and others – remain off the board.

But there is light.

Guidelines issued this past week by Sport NZ and shared on our Facebook page HERE make it clear that rugby can resume at Level 1, with further work being undertaken to establish if community rugby – senior club, junior club, and college – could resume under Level 2 and what protocols and controls will need to be in place.

Potentially, and allowing for a period for teams to get back into training, conditioning, and perhaps a game of two, that means it could return as soon as Queen’s Birthday weekend (end of May) or the weekend following. However it goes without saying that’s as optimistic as things could be; July or even August might be more realistic.

What hasn’t changed is how long the season, once (or if) we get to it might be. As with our story a month ago the fate of the Mitre 10 and Farah Palmer Cups hasn’t been determined by New Zealand Rugby, and their start date – whenever that might be – will determine the end date of club competitions. An overlap on the two might be palatable for administrators for the Premier Men’s given that professional players make up the bulk of the Lions first-choice lineup anyway. Plus with all represenative rugby below NPC rugby and all sevens already confirmed as being cancelled this year, while couldn’t club rugby run through to as late as November?

But it wouldn’t be for the Women’s competition which would be badly weakened by the withdrawal of players for the Pride. Nor would it be feasible in the Men’s game in other unions given shallower player depth and spring farming considerations (such as in Taranaki and Wairarapa-Bush).

A potential 10-week Wellington club rugby Men’s competition suggested to Club Rugby by a reader would see the 14 Premier clubs placed into two pools of seven seeded on last year’s finish – e.g. “Pool A” would be made up of Jubilee Cup champions Norths, Tawa, HOBM, Hardham Cup winners MSP, Wellington, the Upper Hutt Rams, and Johnsonville with the balance in “Pool B”. Teams would play each of the other 6 teams in their pool, three home and three away, and one additional crossover game to avoid byes. The top four in each pool would move into Jubilee Cup quarterfinals, the fifth-placed team a bye into the Hardham semi-finals with sixth and seventh playing off to join those two. The format would be replicated for the Premier Reserve sides, though under this, neither the Swindale or Harper Lock Shields would be awarded.

If no competition rugby is feasible, then another idea to at least get something going could include a series of ‘friendlies’ between clubs and one-off matches for some inter-club trophies such as the McBain Shield between Petone and HOBM, the Jimmy Grbirch Trophy between Poneke and Ories and the Sammy Saili Trophy between Norths and Tawa. These could incorporate ‘club’ days and involve the Juniors, the lower grades (see next paragraph), the Women’s teams and culminating in the Premiers match.

Other grades in Wellington club rugby would be dependant on the number of entries but might need some inventive solutions. Perhaps grading for something like Under 85s or Reserve Grade (or both) could be achieved by a Gala Day-style event at Trentham with teams playing a pair of 40-minute games? It would seem reasonable that the WRFU have already worked through several possibilities.

At college level – which was due to start at the original beginning of Term 2 in two weeks – some things are already clearer. College Sport Wellington have indicated that they would prefer not to push winter sports into Term 4, and at the elite level the NZ Schools and Barbarians programmes have already been shelved for 2020. Even the Top 4 is in doubt with NZ Rugby unlikely to be able to fund it, and the NZ Secondary Schools Sports Council unlikely to step into the breach and use their financial reserves for it.

We’re really not any closer to knowing when we’ll get our rugby back, but the possibility that we will in 2020 in some form is certainly better than five weeks ago.

In other news the lockdown and absence of rugby has put the financial squeeze on several clubs with most trust and grant money on hold and no takings coming across clubroom bars, but ongoing bills like rates to be paid. Club Rugby is aware that Wellington Rugby has conducted a financial health check across the 17 province’s senior clubs and the Referees Association with five in a considerable state of financial distress and four others considered as ‘orange’, which is quite concerning. As we’ve previously suggested, if you’ve got a few spare dollars – and we know that many at this time don’t – then get in touch with your local club and see what you can do.