Skip to content
You are here
Home > Club Rugby > This week in club rugby history: 6-12 April 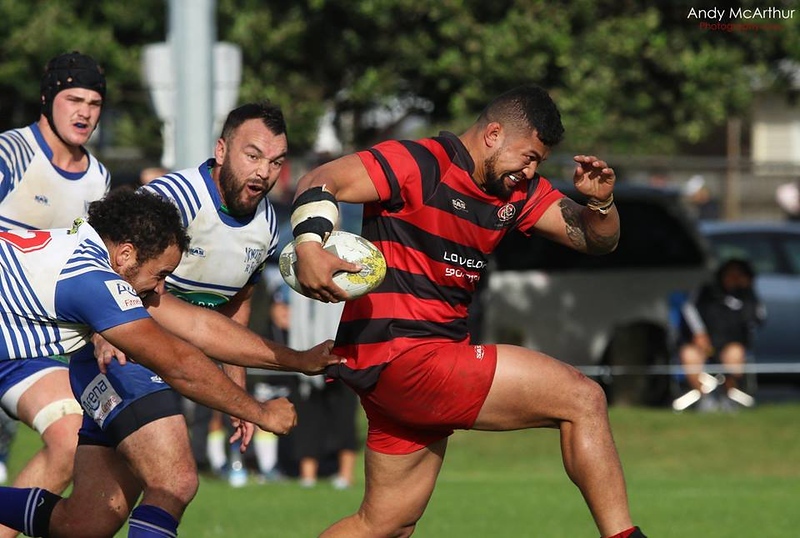 Some highlights of what happened this week in history in Wellington club rugby.

1963: The first round of matches see the previous year’s joint champions Marist Brothers Old Boys and Onslow held to tight winning margins by two “bottom six” sides from 1962 – Wellington and Poneke. Marist beats Wellington 19-16 after trailing 6-11 at halftime and Onslow defeats Poneke 11-6 after being behind 0-6 at the break. This sets the tone for a tight season, in which Marist claims the Jubilee Cup outright on the last afternoon at Athletic Park.

ropped goal and Billy Parsons grabs an intercept try under the bar to seal victory.

2016: For the first time in several years, club rugby returns under lights and during the week with a Wednesday round of Swindale Shield matches. Included in the round’s highlights are OBU’s 30-24 win over Petone, The Rams’ 20-15 win over Tawa and Axemen wing Paddy Hughes scoring his third consecutive brace to start the 2016 season in a 29-9 win over MSP.

1979: MSP open the season with a scratchy 13-10 win over Onslow, showing few signs that they are going to win all 20 matches this year. In contrast, Petone are impressive in beating WCOB 32-6.

1984: Poneke come back from 0-24 down at halftime to beat WCOB 32-24 in one of the great fight backs. Second half tries to John Alefalo (2) and Harry Bryon close the gap to 20-24 after 70 minutes, before Dale Keith scores the winning try.

2001: The cliché “game of two halves” is appropriate at the Polo Grounds today where home side Ories turn around a 7-22 deficit to beat Johnsonville 34-29 in a 9-try thriller. Johnsonville dominate the first half, but a different Ories side start the second and lock Ma’afa Pale scores the winner in the 76th minute. Elsewhere, Petone pip Wests 30-29 and Upper Hutt edge Norths 23-20.

2007: Newly promoted Wainuiomata stun reigning champions Northern United 30-29 at William Jones Park. With All Black Piri Weepu playing a leading hand at first five-eighth, Wainuiomata leap to an early lead and hold on for the rest of the match.

2018: Poneke overcome a week of disruption to topple Norths 40-35 in a high-octane game for the Cyril Collett Shield at Kilbirnie Park. Poneke have had a coaching change mid-week with Mason Lawrence ousted, but the street kids channel this disruption to a positive performance on the field. In an entertaining match, they lead 14-0 early, Norths hits back, Poneke scorch ahead 28-14 at halftime and later 40-21, before a late rally by Norths sees the outcome on tenterhooks to the end.

2006: Hutt Old Boys Marist come back from a 12-point deficit to beat defending first round champions Upper Hutt 32-29, scoring the winning try in the dying moments. Centre Mike Pehi is the star for HOBM with four tries, while halfback Alby Mathewson scored a brace of tries for Upper Hutt. Elsewhere, defending Jubilee Cup champions Petone are boosted by All Blacks captain Tana Umaga in their 31-5 win over Old Boys University. HOBM go on to beat Petone 24-13 in next week’s McBain Shield clash.

1988: Newly promoted Tawa are desperately unlucky to lose to defending champions Wellington today. Tawa lead 19-6 at halftime, but Wellington, with the wind, chip away at them  and prevail 22-19.

2005: Porirua powerhouse Northern United and city slickers MSP continue their menacing starts to the season. Norths rattle up 50 points against Old Boys University while MSP dispatch Ories by 30 points at the Polo Ground. Elsewhere, Upper Hutt grab their second win, beating Wests 22-13, their second of what will be 10 straight wins to win the Swindale Shield.

2011: After four straight McBain Shield losses, Hutt Old Boys Marist win back the silverware, beating Petone 27-20. HOBM replacement left wing Eroni Ekevati pounces on a Petone dropped ball from a kick-off and sprint through to score the game’s decisive try. Elsewhere Upper Hutt concede a late try and sideline conversion to lose to Ories 25-27, while Wainuiomata lose 32-35 to Tawa but miss a penalty on fulltime in front of the posts that would have given them a draw.

1965: Dennis Tindall and Wellington flanker Tom Lister run amok for Athletic in their season-opening six tries to nil 22-3 victory over Taita. The game’s outstanding back Tindall scores two tries and Lister one. With former All Black lock Nev MacEwan in the side as player-coach, Athletic have taken their first steps to winning this year’s Jubilee Cup.

1999: The Burt brothers, Josh and Corey, help spark Johnsonville to a 22-17 win over Petone. Trailing 7-10 at halftime, second five-eighth Josh slips through to score and first five-eighth Corey converts to put Johnsonville ahead. Then, in the 72nd minute with Petone ahead 17-14, Corey makes a clean break to set up the match winning try.

1964: Defending champions Marist open the new season with an ominous 27-9 win over a strong Athletic side, halfback Brian Coulter and No. 8 Paul Russo standing out. University, who will share this year’s Jubilee Cup with Marist, also win well in defeating WCOB 30-3.

1987: Petone have yet to taste defeat since August 1985, and there’s no reason to suggest their streak’s coming to a close when they score 11 tries and beat Paremata-Plimmerton 62-3 today. MSP are shaping as one of their main rivals though after their victory over Hutt Valley Marist 15-9.

2009: A sensational five tries to Marist St Pat’s left wing Brendan Watt and four tries to Poneke centre Charlie Ngatai are some of the numerous highlights of third round matches today. Wellington Lions utility back Watt  scores five of this team’s eight tries in a 55-3 win over Tawa at Evans Bay Park and Ngatai dots down four times in Poneke’s 76-0 rout of Old Boys-University across the road at Kilbirnie Park.

1969: Onslow go within a whisker of upsetting last year’s runners-up University, conceding a late penalty under their own posts to lose 14-15. Elsewhere, Wellington’s All Black wing Michael Knight scores four tries in the Axemen’s 19-9 win over Naenae Old Boys.

1997: Northern United beats MSP for the first time in their nine-year history to create the upset of the round today. Norths win 13-8, with outstanding defence the order of the day. Elsewhere, Johnsonville, who go on to win the Swindale Shield this year, are thrashed 17-47 by Avalon.

Eastern suburbs focus for Premier club rugby in third round