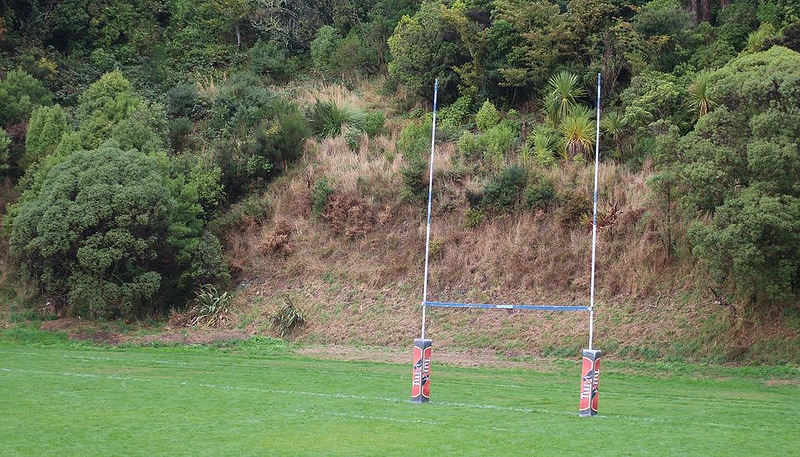 Above: Lonely rugby posts at a suburban rugby ground in Wellington. Rugby, we miss you!

Short Passes wishes everyone well as the start of the the fourth week with no rugby and the halfway mark of the initial 4-week lockdown period rolls around.

Following our article on Friday looking at what shape rugby could take this year, what form of competition would fans prefer? One involving the five Super Rugby franchises, plus one other such as a Barbarians team to make up an even number of six teams? Or one involving provincial unions, like an old-school NPC competition with all the All Blacks playing?

Another question that is impossible to answer right now is the structure of the club rugby competition. In Wellington, do you play a full Swindale Shield and then go straight to knockout matches for the Jubilee and Hardham Cup competition (like they do for the Gallaher Shield in Auckland)? Do you split the first round into pools to shorten it, then have a full second round? Some form of knockout competition? Some form of inter-provincial competition with Manawatu and Hawke’s Bay clubs, who are in the same predicament? A national or regional knockout club rugby competition or Top 4 tournament?

The same issues will need to worked through for college and First XV rugby. As previously indicated, the intention is to still run a First XV Top 4 tournament, but to do so would mean competitions being played first.
+++++

For those craving some rugby content during the lockdown, Petone are running a number of live interviews on Instagram this week with current and former players. Up tomorrow is former Villager and current Glasgow and Scotland midfielder Nick Grigg, with current player Tupou Sopoaga, Brisbane Bronco Jordan Kahu, Black Fern Jackie Patea-Fereti, and former Lion and Hurricane and now Wasps and England player Brad Shields. The schedule is on their Facebook page, where they’ll also be posted afterwards.

Clubs are coming up with inventive ways to keep the lights on – literally – during the lockdown as bills, like power and rates, continue to come in for their home bases while the traditional sources like bar takings have dried up. Some are running raffles – long a popular way to raise funds – while others have moved into other realms like a virtual drinks session. Club Rugby urges readers to find out what their local club is doing and what they can do to help out; even $20 could mean a lot.

With Mainland Netball becoming the first major regional association to succumb to the financial pressures the lockdown has imposed, is it a matter of when rather than if a provincial union follows? It’s well known that some, mainly Southland and Taranaki, were in strife even before now, and Wellington is reportedly not much better.

Club Rugby is also dismayed by the decision not to allow greenkeepers to maintain golf greens around the country. Speaking to an administrator of a local croquet club last week, this could be devastating for these mallet wielders. Last time their club had to repair their greens after it got infected by a virulent weed it cost them $8,000 and this time it could be curtains. Extrapolate that by 18 greens and worst case is many golf courses could be gone too and best case there will be long delays before members are allowed to get back playing once allowed to do so as long and costly repairs and preparation will have to be undertaken first. What is the problem in not allowing one designated person to get back to work? Is the return of sport not a ‘wellbeing’ consideration?

While backing former teammate Phil Kearns to take over as RA boss and eventually help the game return to its former glory, Farr-Jones could only see short-term pain for the cash-strapped code.

“I wouldn’t be surprised if an administrator was appointed in the next fortnight,” Farr-Jones told ABC radio program The Ticket.

“I understand that reserves are minimal … that would only be funds that have come from world rugby from the participation rights of the world cup last year.

“Otherwise I just don’t think we’ve put any acorns away for a winter like we’re expecting at the moment where there’s no income projected.”

World Rugby has issued a law application guideline for the breakdown following the Executive Committee’s approval of recommendations by the specialist breakdown working group.

The Law 14 and 15 application guideline will be operational for all competitions commencing after 1 July, 2020 and reinforces the application of current law for what is a complex and dynamic facet of the game.

With a focus on player welfare and game attractiveness, a specialist breakdown group comprising international coaches, players, medical, laws and research experts, considered current trends and challenges and considered law change before recommending a strict reinforcement of existing law as the most appropriate and successful course of action, specifically:

World Rugby has produced a comprehensive visual guide, including video explanations, for the rugby community on its laws website, laws.worldrugby.org.

World Rugby Chairman Sir Bill Beaumont said: “The breakdown is the most dynamic facet of the game and it is increasingly difficult to referee, but just as importantly, it is responsible for nine per cent of match injuries.

“Therefore it was important that we looked to identify ways to reduce the risk of injury, while promoting a fair contest for the ball.

“The group looked at a range of potential solutions, including potential law trials, but they unanimously agreed that the best practical and evidenced approach is to reinforce existing law, rather than law change.

“In particular, there will be focus on the ball carrier playing or placing the ball immediately, the tackler releasing immediately, rewarding the player who wins the race to the contest, penalising side entry and players who dive, not drive, into rucks.”

Does This Mean ? Players Are Smarter than Everybody Else? . . . Please Let Us Know If These Memes Put A Little Smile On Your Face! Leave A Comment ??‼️?? . . . ⛑Stay Safe And Healthy ⛑ WE CAN MAKE IT TOGETHER ‼️ Check us out @allstarfilms

Read here for an interesting take from the Rugby Pass website on the state of USA Rugby, after filing for bankruptcy last week.

When the USA Eagles took on then Wellington club champions the Upper Hutt Rams in a World Sevens Series warm-up fixture three years ago: