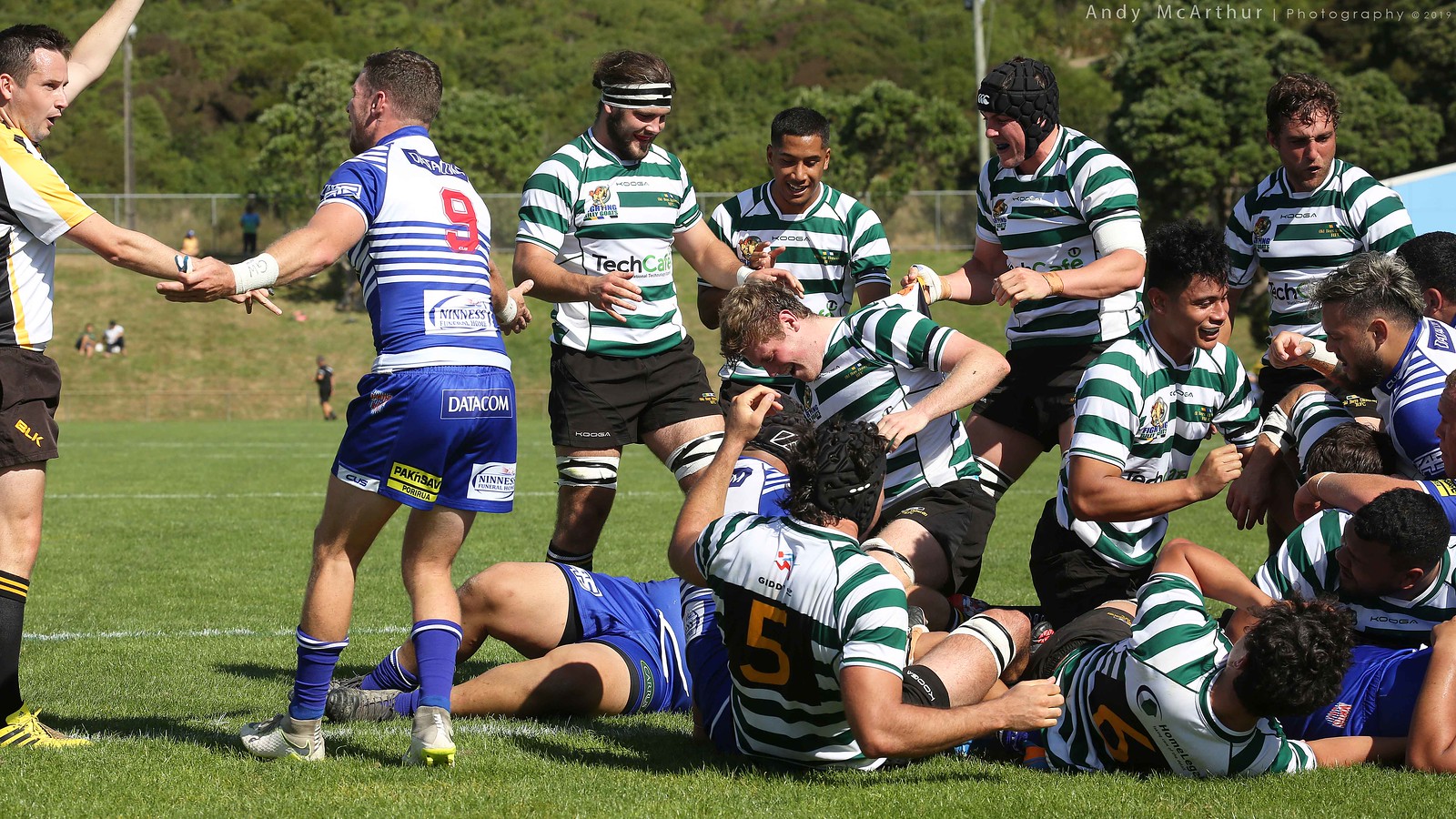 Try-time for Old Boys University against Northern United when they met last year. Norths went on to win the game with a last-gasp try (see below).

Some highlights of what happened this week in history in Wellington club rugby.

2019: Livewire Northern United first five-eighth Esi Komaisavai intercepts a pass in general play and sprints 60 metres to score the match-winning try and see his side retain the Ken Douglas Trophy with a 30-25 victory over Old Boys University in a replay of the previous August’s Jubilee Cup final. In a tight seesaw match, OBU had taken a 15-10 lead into halftime, weathering waves of Norths possession and territory at the other end to counterattack and score two  forwards tries from their only two clear chances of the half. Norths break open the game immediately after halftime with a turnover from a lineout on halfway and a runaway try, but OBU hit back once more when second five-eighth Izzy Foai joins his forwards at close-quarters and dives over to keep the game on tenterhooks.

Above: Esi Komaisavai on his way to scoring the match-winner against OBU in 2019.

2006: Northern United and Avalon kick off the new season under lights at Porirua Park on Friday night. But, on the occasion of Avalon lock Jason Goble’s 250th game for his club, the scoreboard operators are almost made redundant. It’s not until the 78th minute that Norths break free when first five-eighth Rob Aloe scores from a chargedown and the home team wins 7-0.

2007: Poneke pip MSP 18-17 in the battle of Kilbirnie first up this season. MSP take the early ascendancy and race to a 14-3 lead. Poneke close the gap and after halftime hooker Dane Coles links with fullback Tevita Latu in for a key try. No. 8 Chris Brightwell scores the winner with five minutes to play.

1991: After missing out on making the Jubilee Cup round for the first time in 40 years last year and settling for the Hardham Cup instead, Wellington defeat Hutt Old Boys 20-18. Wellington come back from an 11-point deficit to win against the Hutt side that will go on to win this year’s Jubilee Cup title. Elsewhere, Petone wing Matt Lee scores a hat-trick to give Petone a powerful 43-0 win over Johnsonville.

Above: Tawa kick off their 2013 season at home at Lyndhurst Park with a 32-0 win over Upper Hutt. Tawa will win the Swindale Shield and the Jubilee Cup in a historic season for the club.

1983: The Poneke FC’s 100th anniversary celebrations are marred slightly when their top team loses 7-9 to Wainuiomata in their Swindale Shield opener. Elsehwhere, Western Suburbs, an off-season amalgamation of Athletic, Onslow and Karori, draw their first ever match 15-15 with Upper Hutt.

1994: Stokes Valley cause an upset in the first round beating Upper Hutt 17-15. A last-minute penalty by former Upper Hutt first five-eighth Alan Henderson propels Stokes Valley to their second Premier win in the last two seasons.

2004: It’s the Waldrom brothers’ show at Fraser Park in today’s season opener, Scott Waldrom crossing for four tries and brother Thomas one against Johnsonville. From the moment that Crusader Scott gallops from halfway to score three minutes into the match, Avalon are on-song. Long-serving lock Jason Goble and up and coming hooker Mahonri Schwalger also stand out in the 43-16 win.

1982: Wellington upset defending champions MSP 12-6 in this season opener, fullback Evan Hopkin landing a whopper 60-metre penalty and three others to put the Axemen ahead 12-0 at halftime. They hold on in to the wind to set up a Swindale Shield-winning season.

Norths start their 2010 season with a big win over Marist St Pat’s in a replay of last August’s Jubilee Cup final. Norths will go on and win the Swindale Shield and the Jubilee Cup, the last club to do so until Tawa in 2013 and then OBU in 2017.

1998: Western Suburbs edge Tawa 19-15 in this second round match, withstanding a fierce late rally in windy conditions. These two teams are destined to meet in the Jubilee Cup final later in the season.

2009: In two significant results in second round matches today, Petone defeat Norths 30-25 at the Petone Rec to hand Norths its second straight loss of 2009, and Poneke beat defending co-champions Marist St. Pat’s 18-8 at Evans Bay Park to inflict the first defeat of MSP on their home patch for almost two years and also claim the inaugural Miller-Horan Trophy between these sides. Norths and Petone will go on to share this year’s Swindale Shield, while MSP will beat Norths in the Jubilee Cup final later in the year.

Above: When Poneke beat MSP 18-8 this week in 2009 in the battle of Kilbirnie and to win the inaugural Horan-Millar Trophy.

1986: Wing Wayne Gray scores a hat-trick and halfback Neil Sorenson kicks 20 points as MSP open the season with a 48-8 win over Paremata-Plimmerton. Rocked by an early Bernie Fraser try, Petone rebound to beat Hutt Valley Marist 22-4 in their match, while Western Suburbs step out for their first time in their new ‘French Roosters’ playing kit and lose to Wellington 6-27.