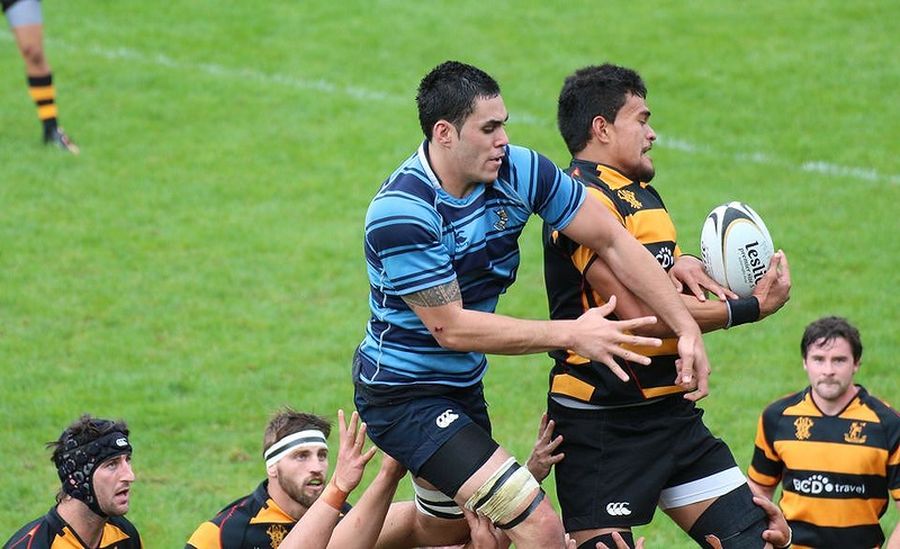 Above: Johnsonville’s Kane Le’aupepe and Wellington’s Vaea Fifita clash in the lineout in their 2015 second round Swindale Shield match. Wellington won 17-12 for the Mick Kenny Memorial Cup.

Ordinarily, the second round of the 2020 Swindale Shield would have been played this Saturday.

These are not ordinary times and hopefully this disruption is just a temporarily blip in the big scheme of things. Below are some images from our photo galleries vault of second round club rugby matches in recent seasons.

2002: Marist St Pat’s second five-eighth Norm Broughton makes a charge against Poneke in their fixture for the Bill Elvy Memorial Trophy. MSP won this match 20-10, after leading 15-0 at halftime. These two teams would meet in the championship Jubilee Cup final at Wellington Stadium later in the year. Photo: The Dominion.

2007: Poneke’s Fa’atoto Monanau makes his move against Hutt Old Boys Marist in their 39-25 win at the Hutt Rec. Poneke would finish second in the Swindale Shield and HOBM fifth, but the Eagles would go on and win the Jubilee Cup. Six years later, Moananu would play his 250th Premier match against the same opposition.

2010: Young gun TJ Perenara seizes his chance against Upper Hutt in their second round Terry Farrow Memorial Cup match at Maidstone Park. Norths swept to a 82-16 victory, en route to an unbeaten first round in which they scored 546 points and conceded 197 in 11 games.

2016: Ian Kennedy with ball in hand for Old Boys University against Marist St Pat’s for the Jack Lamason Cup. OBU won this game at Nairnville Park 23-19 and went on to win the Swindale Shield.

2017: Paddy Hughes evading danger – or perhaps creating it – for the Wellington Axemen against the Upper Hutt Rams. The Rams leapt to a 50-24 win in this match at Maidstone Park.

2018: Having a rest? In fact Wainuiomata’s players are setting up for another go at OBU’s defences in their second round clash at William Jones Park. Wainuiomata won 22-20 to win the Peter Dunford Cup, with fullback Justin Wilson scoring all their points.

2019: Ale Peni about to score a try for the Avalon Wolves against Ories. Ories won 41-24, outscoring the Wolves 7 tries to 4. Photo: Hugh Pretorius.

2019: Highlights above of Northern United’s 30-25 win over Old Boys University in round two of the Swindale Shield.