Skip to content
You are here
Home > Club Rugby > This Week in club rugby history: 23-29 March 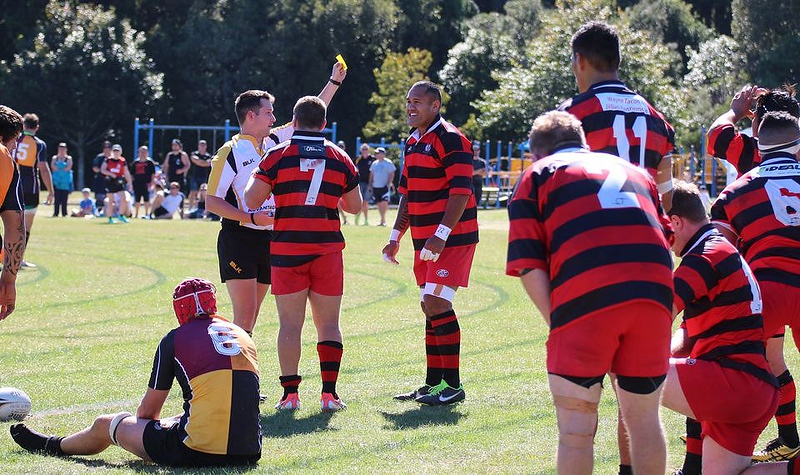 Above: Referee Gordon doles out a yellow card to a Poneke player in their 35-35 draw with the Upper Hutt Rams in the opening round of 2015 at Trentham Memorial Park.

Plus some highlights from last week:

2018: Defending Swindale Shield and Jubilee Cup champions Old Boys University send out an ominous warning to all opponents by opening their season account with a 55-10 Swindale Shield win over Poneke, but two of the other six Gala Day fixtures go down to the wire. Avalon Wolves get up to beat Wainuiomata 33-32 and Northern United score a converted try with the last play of the game to beat Petone 22-20. Norths lift the  Murray Henderson Trophy with first five-eighth Leon Ellison scoring and converting his own try. Norths will go on and win the 2018 Swindale Shield.

Ben Tupuola evading a tackle in Wainuiomata’s 34-34 draw with Norths in 2015.

2003: The club rugby season kicks off under a blazing sun at a rock hard Trentham Memorial Park where all first round games are played. Close matches are the order of the day, with defending champions MSP’s 22-8 win over Upper Hutt being the widest winning margin. Lock Ross Filipo stars In Petone’s 19-15 win over Norths, while Tim Collins (Avalon), Andrew Smith (Poneke) and Nu’u Ropati (Ories) all score braces in their side’s wins.

2018: A fired up Wainuiomata set the Swindale Shield alight this afternoon by toppling defending champions OBU 22-20 at home at William Jones Park. Fullback Justin Wilson is the standout individual for a gallant Wainuiomata in their Peter Dunford Cup win over OBU, scoringall his team’s 22 points. Wilson scores a try and kicks five penalties and a conversion. Elsewhere, Hutt Old Boys Marist, Tawa and Avalon win their second straight matches to head the standings after two weeks. HOBM rock to a 47-19 win over Northern United at Jerry Collins Stadium, Tawa beat Ories 39-26 and Avalon defeat Johnsonville 34-10 in a trio of bonus point victories.

2016: On the morning of the 2016 season opener, Porirua Park is officially renamed Jerry Collins Stadium and a commemorative plaque is unveiled in his honour at the foot of the grandstand. Members of Collins’ family, the Northern United Rugby Football Club, former players and teammates and many people from the local community witness the plaque’s unveiling and pay their respects to former Norths, Wellington, Hurricane and All Black loose forward Collins who died in a car crash in France in 2015. Read more HERE

1999: There are 35 tries scored in six matches today’s first round. Defending champions Western Suburbs impress in beating HOBM 34-13, MSP overcome Avalon 46-14 and Lotu Filemu scores a hat-trick for Petone as they beat Harlequins 48-13.

2009: The opening day of the 2009 season is sizzling and so is the rugby, as Petone and Poneke both impress with bonus point wins on a hot Gala Day held at Porirua and Trentham Memorial Parks. Petone lay down their title credentials with an 86-9 win over Avalon at Porirua and Poneke oust Northern United 34-19 at Trentham. Petone score 13 tries, including four to wing Fraser Middleton, while new representative players Daniel Ramsay and Charlie Ngatai star for Poneke. Petone and Norths go on to share this year’s Swindale Shield.

2008: MSP are defeated 10-20 by OBU in this season opener for the Jack Lamason Trophy. MSP will go on to win their next 10 straight to win the Swindale Shield and then tie the Jubilee Cup final 10-10 with Norths and share the Cup. Elsehwere, Ben Aoina kicks all his side’s points in Upper Hutt’s 18-15 edging of Tawa and lock Jeremy Thrush scores two tries in HOBM’s 29-6 win over the Wests Roosters.

When Norths and HOBM met at Porirua Park in round one in 2018: