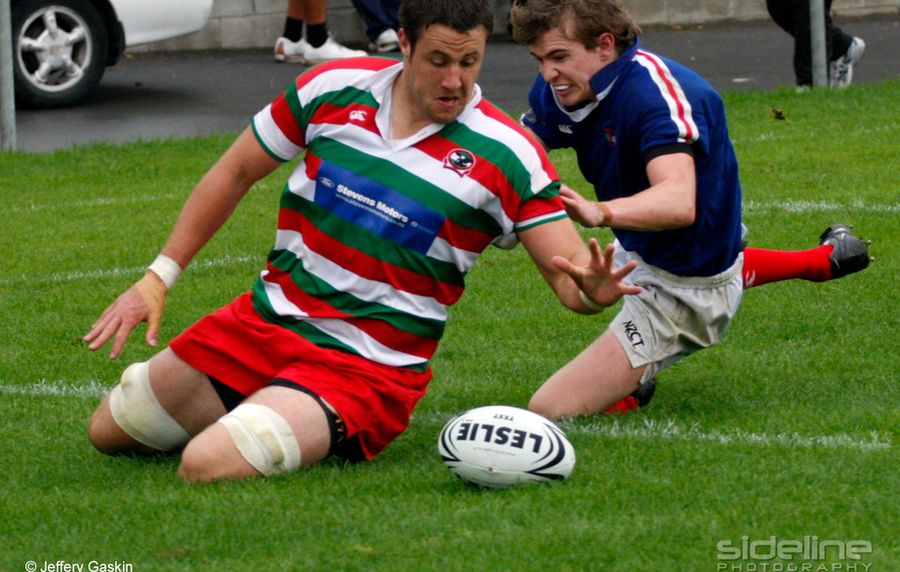 Above: HOBM lock Jeremy Thrush scoring one of his two tries in the Eagles’ 29-6 win over the Wests Roosters in the opening round of the the 2008 Swindale Shield at neutral Porirua Park.

The opening round of the 2020 Swindale Shield was scheduled to be played this weekend. Covid-19 has forced the competition’s postponement for at least the first month. Below are some selected images from week one games from the past from the Club Rugby vault.

2005: Palepoi Nonu gets a pass away in Johnsonville’s 13-13 draw with defending Jubilee Cup champions Marist St Pat’s. Playing with 14 players after a 25th minute red card, Johnsonville produced an inspired performance and were unlucky not to win. Photo: The Dominion.

2012: Hutt Old Boys Marist’s Deon Carney takes the ball off the back of the scrum. HOBM beat Tawa 29-18 and they went on to win that year’s Swindale Shield with 10 wins from 11 games. Tawa were seventh with a five win-six loss record.

2013: Poneke beat Norths 22-17 in their season opener, winning the Cyril Collett Memorial Shield for the first time since its presentation in 2008 (see above).

2015: Valentine Meachen stretches out to score one of his team’s six tries in MSP’s opening round 52-8 win over Johnsonville. MSP went on to finish runner-up in both the Swindale Shield and Jubilee Cup competitions. Photo: Hugh Pretorius.

2016: Alex ‘Dutchie’ Barendregt on the charge for Old Boys University against the Upper Hutt Rams in their season opener in 2016 at Maidstone Park. The defending Jubilee Cup champions went on and did the Swindale-Jubilee double in 2016.

2017: Halfback Frae Wilson gets a pass away against the Avalon Wolves in their tight and willing 14-13 season opening win at Awakairangi Park. Photo: Hugh Pretorius.

2018: Tawa right wing Tom Maiava on Premier debut scores this clutch try against Marist St Pat’s as they opened the account with a 35-29 win.

There were 56 tries scored in the opening round of club rugby, such as this one to @tawarugby1 against @msprugby in their 35-29 win. #swindaleshield2018 Results over on our website.

2019: Try time for the Avalon Wolves over the Wellington Axemen in their first match of the year. Avalon won 27-15.

Club rugby to come alive in round five