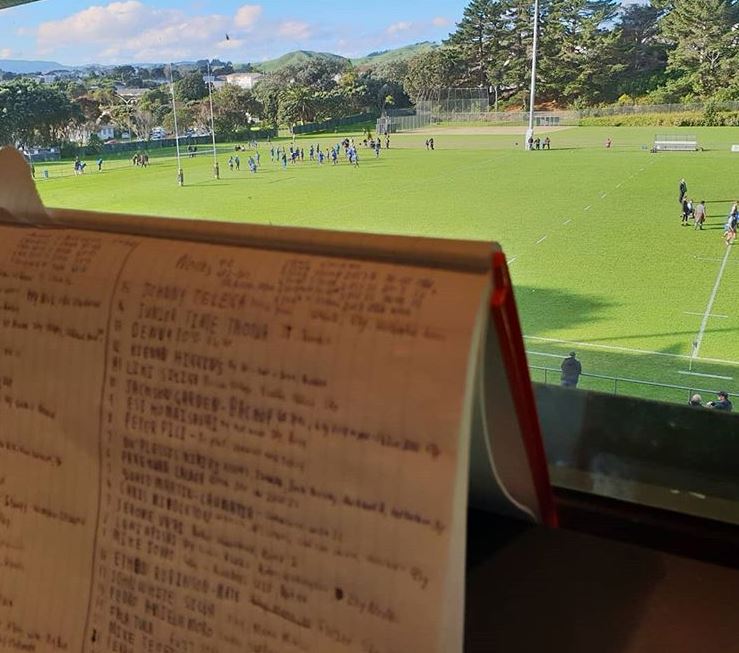 One of the great things about club rugby is that every year some players break out and create a reputation and put themselves into the major representative picture. We’ve chosen a player from each of the 14 clubs who we think can do that in 2020 (emphasis –  this is not a ‘best of’ list, just some players that we can think can add value to their teams and competition).

So here’s our players to watch this season, in clockwise order from the eastern suburbs.

Steven Va’a (midfield/outside back, Oriental-Rongotai) – as far as Premier debuts go, it seldom gets better than it did for Va’a a year ago as he dotted down four times against Paremata-Plimmerton. That was one of just two starts in 2019 for the Rongotai product, but by season’s end he was an integral part of the Ories Premier side from the bench. A starting role in 2020 alongside older brother Reuben beckons, where he figures to be a major cog in what shapes as a young and exciting Magpies backline.

Tom Martin (lock, Marist St Pats) – MSP were relegated to the Hardham Cup for the first time since 1974 last year, but actually finished the season winning 11 of their last 12 games, including victories over three of the four eventual Jubilee Cup semi-finalists. Martin was a big reason behind the resurgence producing a man of the match display in the 48-31 thumping of champions Norths. Not an especially tall lock, but tough, skilled and mobile, Martin captained the Waikato Under 19’s at the Jock Hobbs Memorial tournament and will be amongst those pushing for a place in the NZ U20’s side for the World Championship later in the year.

Nick Roberston (wing/fullback, Poneke) – Poneke had success last season playing an all-action high tempo style of rugby, utilising their mobile pack, strong loose forwards and swift backs to good effect. The most experienced player in terms of games played on this list, Roberston will be an even more vital cog at Kilbirnie Park following the departures of both Pakai Turia and Levi Harmon. Currently rehabbing a broken foot but due back soon with international honours now on his belt courtesy of playing for the Philippines Volcanoes 7s side that won gold at the 2019 SE Asian Games, he’ll be looking to continue the form that saw him score 12 tries in 14 matches from both the left wing and fullback last term.

Xavier Smith (loose forward, Wellington) – was one of the first names on the team sheet every week for the Axemen, last year making 14 starts and scoring two tries. Smith isn’t a heavyweight in stature, but he is in heart. A tigerish defender and deceptively strong ball carrier his industry will help ensure Wellington are no pushovers, and has also been given leadership responsibilities at Hataitai Park this year having led out the team in their preseason match against Nelson last Saturday.

Reece Plumtree (midfield, Old Boys-University) – sometimes a surname can be a burden, and that’s something the elder Plumtree will be looking to shake off this season and emerge from the shadow of both his father and younger brother Taine. Injuries have been a bugbear for Plumtree since finishing up at Wellington College, but with the Goats midfield having been in something of a state of flux last year and clean bill of health should see Plumtree establish himself in the side, and if he does he could start making strides towards being the player he’s long been touted he could be.

Reece Plumtree playing for the Goats against Massey on Saturday.

PJ Sheck (prop, Johnsonville) – one of the bright lights in an otherwise bleak year for the Hawks – where they went winless and haven’t won in 20 outings – was the form of the representative U19 front-rower. Capable of playing both sides of the scrum but probably more comfortable on the loose head, he is a strong ball carrier and solid on defence. It was improved conditioning however that put him in contention for representative honours. If his positive work ethic continues, it may rub off on others at Helston Park.

Tom Maiava (midfield/outside back, Tawa) – with 30 Premier appearances already, Maiava is second only to Robertson as the most-experienced on this list. Maiava was part of the ‘band of brothers’ side at Bishop Viard that won a Premier 2 title and then played in the Premiership, before finishing his college career with a season at fullback for Wellington College. Debuting straight out of school in round 1 of 2018 on the wing, Maiava has bulked up considerably since and now seems firmly ensconced in the #13 jersey at Lyndhurst Park where his straight running and outside passing have come to the fore, and helped see him make the Wellington Sevens side last year.

Waylon Baker (lock, Norths) – seven years ago Baker captained the Porirua College 1st XV to their greatest triumph of recent times when they beat St Pats Town in the Premiership. It’s been a winding road for him since with just a couple of Premier appearances from the bench before last season, but from the moment he was thrust into a starting role in the Jubilee Cup he became an ever-present and delivered his best game in the biggest of them all; the Jubilee Cup final. In a team full of stars, is he the next?

Zac Lemana (loose forward/lock, Paremata-Plimmerton) – when Pare-Plim made waves in 2018 they had the industrious and robust James Hansen manning the blindside flank, and his move to Australia left a hole that they struggled to plug last year. One who they’ll be counting on to try and do that this term is Lemana, with the former Paraparaumu College standout having all the attributes you want in a solid defensive presence but needs to both elevate his game and avoid the injury bug. If he can do all that then representative footy either here or up the coast as a ‘player of origin’ isn’t out of the question.

Jack Wright (Loose Forward, Upper Hutt Rams) – there has been a mass exodus of talent from the Rams during the off season, but Wright remains. Captain of the St Pats Silverstream 1st XV during his time there and a member of the Wellington U19s the year after, he brings quality to the back row. He also brings supreme fitness, once posting a leading time in the Bronco fitness test and beating the time of one Beauden Barrett. Injuries were an issue last year as Wright only managed to get into half of the Rams’ games but he’ll be counted on around the park, particularly at the breakdown, kick-off, and lineout, but also for his leadership qualities.

Chris Aumua (centre/wing, Avalon) – scoring five tries in your school’s televised traditional match is one sure way to get noticed, but perhaps set some unrealistic expectations that the younger Aumua would emulate elder brother Asafo. Injuries blighted his 2019 but Aumua has still managed 16 tries in his 24 Premier matches to date, and if he can stay healthy he could be a matchwinning force for the Wolves this time around.

William Rua (loose forward, Hutt Old Boys Marist) – a regular in the Eagles colts side the past two seasons, Rua has quietly amassed 17 Premier appearances in that time. Having done the bulk of his schooling across the road from the Nest at Hutt Valley HS, Rua spent his final year at Rongotai College where he excelled in the Premiership. He comes into 2020 on the back of an outstanding campaign with Wellington Maori as well as playing a leading hand in HOBM’s Sevens side, and with some personnel changes at HOBM seems primed to make one of the loose forward jerseys his own.

Dylan Williamson (lock, Petone) – with the Village pack having a number of recognisable names it’s the understated one in the engine room we’ve picked. Williamson has forged his own path into the Petone side, starting all 16 games alongside Eduan Struwig as the most effective pairing in the competition while focusing on his core roles. With Struwig having again left the Rec, the onus is on Williamson to build on his solid club season and representative stint with Wellington Maori.

Solomona Mapesone (utility back, Wainuiomata) – making the short trip from the local high school to the rugby club last year, Mapesone proved that you can make the step from Premier 3 college rugby to club Premier by being named Club Rugby’s rookie back of the year. Mapesone appeared in all 18 of Wainuiomata’s matches last year including starting in the Jubilee Cup final, being used mainly on the wing but also periodically at halfback. That versatility will be a useful asset at William Jones, and if he can harness his physical attributes with a winger’s finish tries will certainly come his way.

The opening round of Wellington club rugby is this Saturday 21 March. View the draw here: http://www.clubrugby.co.nz/wellington/games-results.php?competition=1&season=16&round=1

Aisle be Back: Hurricanes v Chiefs this Sunday