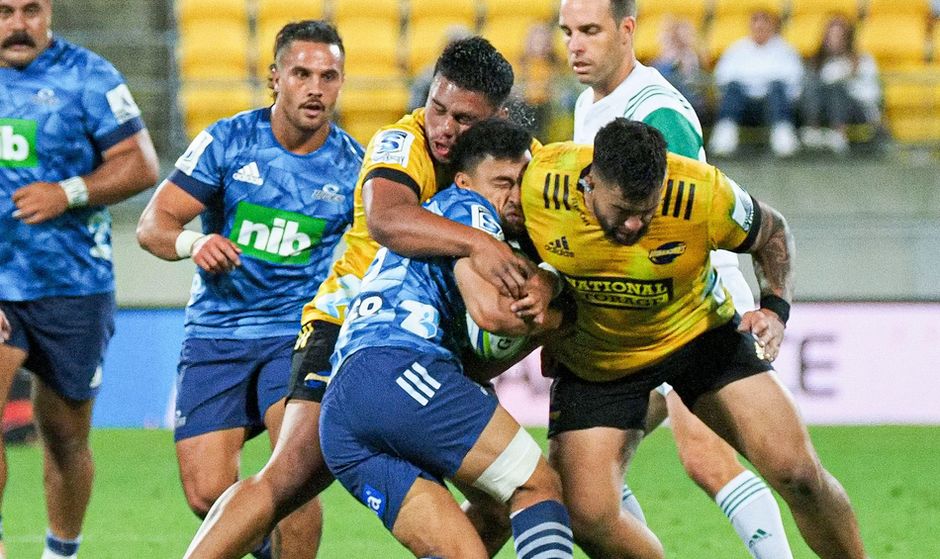 Above: Moment of impact. The Hurricanes missed out to the Blues 15-24 on Saturday night, ending the match with 12 players. PHOTO: Stewart Baird.

A tournament team was selected afterwards:

A wonderful rugby occasion on Saturday with Wellington and Nelson clubs celebrating their 150th anniversary with a keenly fought match won by the visiting Nelson 32-21. Nelson’s arrival was delayed at least two hours following a fatal road crash on State Highway 1 in Picton. Their ferry didn’t arrival in the capital until midnight.

Nelson Rugby Football Club have produced three All Blacks the most famous of which is George Smith who played 14 games and scored 19 tries on the 1905 Originals tour. His two tries won the Scottish test 12-7. Smith also won 14 national track and field titles and held an unofficial world record in hurdles. The player of the series in Great Britain v New Zealand rugby league tests is named after George Smith following his contribution on the pioneering 1907-08 ‘All Golds’  tour. He even rode Impulse to victory in the 1894 Auckland Cup though that is fact disputed by the Association for Rugby Historians and Statisticians.

There is one weekend to go before the start of the Premier club rugby season on Saturday 21 March. There are several more pre-season matches this coming Saturday, while other clubs are holding internal camps and training days to fine tune their preparations before the opening weekend. We will promote this information in one place at the end of this week.

A busy weekend for Wellington’s two professional referees, with both having to produce the red card in their respective fixtures. Firstly Mike Fraser sent Tyrel Lomax from the field in the Hurricanes loss to the Blues, and then hours later on the other side of the world Ben O’Keeffe did likewise in dismissing Manu Tuilagi late in England’s win over Wales in the Six Nations.

Wasn’t it good to see Kobus Van Wyk high-five a couple of spectators after he scored. Red Badge security must have been in a tail spin. If the fans see raw passion from the players it leads to greater support regardless of the result.

The Hurricanes were down to 12 players on Saturday – they have played with 12 before and actually won. In 2000 the Waratahs were beaten 27-20 in Sydney despite Jonah Lomu being sent off for two yellow card offences, and Norm Hewitt and Filo Tiatia both getting binned too. Andre Watson was the referee.

The Blues claimed their first away win over another Kiwi team since 2013 when they beat the Hurricanes 24-15 in Wellington. The span of matches was 26 matches and the victory snaps a nine game losing streak dating back to 2014 against the Hurricanes.

Some more success for Thamsyn Newton. After claiming the domestic Twenty20 cricket title with the Wellington Blaze, she and her OBU Impala’s and Pride teammate Montana Heslop claimed the inaugural Women’s Red Bull forceback title in coastal Taranaki last weekend.

Two items from our Pacific desk.

The province’s most recent club centurion has moved on. HOBM’s Francis Tanuvasa brought up his hundredth game in the Eagles’ last round Jubilee Cup loss to Wainuiomata, but has relocated to Melbourne. A useful player across the three-quarter line, the Hutt Valley HS product proved that you didn’t need to play Premier 1 rugby at college to have a successful club career.
We’ll have a comprehensive list of off-season moves next week before the season kicks off.

Short Passes wishes Tracy Smith all the best in his recovery from a stroke at the end of January. Smith has been heavily involved with the Centurions RFC over a long time and has been instrumental in driving their teams and is formerly an Avalon and Axemen halfback and Wellington rep and in recent times was coach of the Axemen Premiers.

International rugby to look forward to later this year:

The Wanganui Rugby Football Union has been scrambling to get a completed Premier and Senior club draw confirmed after late withdrawals from both grades.

Wanganui Pirates RFC have confirmed they will field one team in the Senior competition – dropping out of Premier with their championship wins of 2014-15 and last grand final appearance in 2018 now a distant memory.

The competition will start on Anzac Day, 25 April.

Rugby Southland staff have had a frantic couple of weeks following the withdrawal of Edendale from the premier competition.

It has prompted yet another shake-up to the 2020 club season which will kick-off on March 28.

A 10-team premier competition was locked in place before Edendale contacted Rugby Southland a fortnight ago indicating it wanted to drop down to the 10-team division one competition.

It meant the premier competition would be reduced to nine teams and division one competition increase to 11.

Decent chin under there ?? All for a good cause ?? @looseheadz #rugby #wasps #englandrugby

England are one win away from a second successive Grand Slam in the Women’s Six Nations after a Poppy Cleall hat-trick helped them power past Wales 66-7 in front of a record Twickenham Stoop crowd.The crowd of 10,974 is a record for an England women ticketed home game outside of a World Cup, surpassing the record of 10,545 set at Exeter’s Sandy Park in the 2019 Six Nations.

Wales upset England 23-22 in the Under 20 Six Nations which leaves England, Wales and France with two wins each. Ireland lead the competition with 3 wins from 3 matches. Their fixture against Italy was postponed.

France is now level with England on 13 points at the top of the table, ahead of their match against Ireland this coming Saturday. England have to await news of their recheduled match against Italy in Rome, while Scotland meet Wales in Cardiff next.

Looking forward to the start of the club rugby season with the defending champions Norths:

Club Rugby has an extra advertising spot open for the rest of 2020. Please email editor@clubrugby.co.nz for more. Unlike non-commercial and publicly funded organisation Radio New Zealand who can drop ___ [insert amount here] of taxpayers money into full billboard advertising at Super Rugby games advertising their website, this website relies on the financial goodwill of our core sponsors to exist.