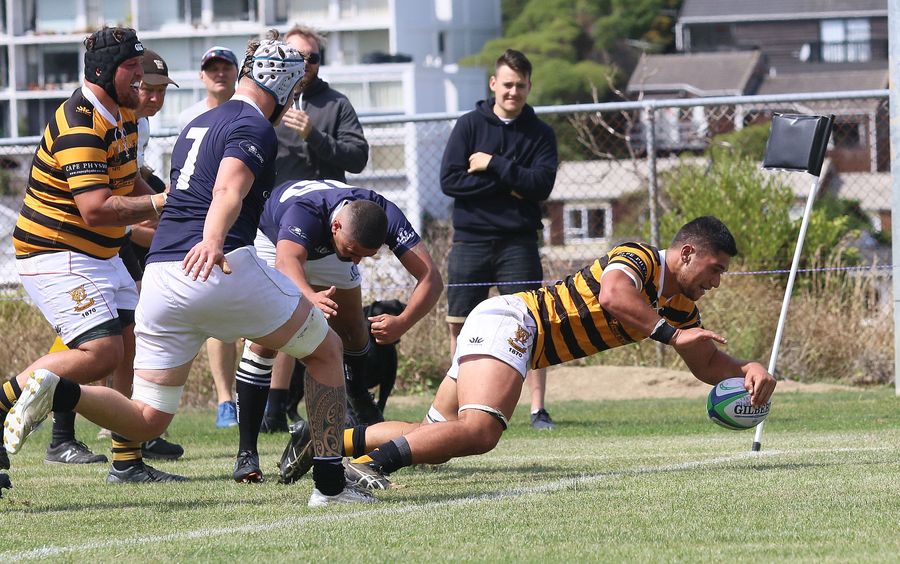 Above: Wellington Axemen flanker Gabriel Wilson crosses in the corner just before halftime in the match at Hataitai Park.

UPDATED: The visiting Nelson RFC side beat the Wellington Axemen today in their 150th anniversary pre-season clash at Hataitai Park this afternoon. See below for our match report of this game.

Elsewhere in Wellington,  the Poneke Premiers beat the Tukapa (Taranaki) Premiers 27-14, after leading 14-10 at halftime in their fixture at Ian Galloway Park for the Zemba Cup.

There were also pre-season hit outs between the Wainuiomata and Ories, Norths and Upper Hutt Rams and Tawa and Paremata-Plimmerton squads.

At Evans Bay Park, the Hurricanes Hunters made much of the play in the first half before going down 5-31 to the Blues As side.

Played in bright sunshine, and on a rock hard surface, the visitors superior scrum was the telling difference in a match that featured seven tries and three lead changes.

Nelson extracted at least two tightheads and three penalties from the scrum and weren’t going to be overtaken when No.8 Isaiah Miller scored from a pushover to stretch Nelson’s lead to 25-16 with about 10 minutes remaining.

The opening sequence was frantic with the ball in play for the best part of three minutes. Nelson crossed the strip after a dozen phases through centre Paddy Miller-Leaf.

Wellington responded with two Jake Sargood penalties to make it 7-6, but Nelson, with their close quarter forward thrusts, stretched to 12-6 when second-five Chris Kerslake cantered through.

Despite being consigned to long periods on defence, Wellington hit back with the next two tries. Openside Gabriel Wilson made the halftime score 12-11, hurdling over a ruck close to the Nelson line.

The first strike of the second-half was made by sprightly halfback Tim Kernis, dotting down in the corner after a searing break a couple of phases earlier.

Nelson halfback Matthew Soper boasts a prodigious boot and two 40-metre penalties propelled the boys in royal blue into an 18-16 ahead.

Wellington’s attempts to strengthen their scrum from the bench were futile and when Nelson used the slight northerly to anchor the Axemen deep in their half you sensed the scrum pressure would eventually prove overwhelming.

Wellington did close the gap to 25-21 with a breakout try to Matt Goosen, dashing from halfway after bold passing inside the 22. However a late attempt to replicate the feat  caused a fumble and allowed Miller to pounce and celebrate a deserved double.

Miller was perhaps the man of the match with a several powerful surges. Nelson front rowers Kershawl Skyes-Martin and Brendan Asuma-Goodman stood tall and blindside Larry Banse was a handful in the first spell.

Soper with 12 points from the tee and solid stewardship was the pick of the backs alongside the robust and dependable Kershaw.

For the Axemen, Wilson, Tom Robinson and Ben Strowger-Turnoch were tigerish on defence while Kernis is be applauded for his energy and centre Jayden Klni went underutilized.

After the match both clubs attended a celebration at New Zealand Rugby to mark the occasion.

In an early game on Hataitai Park, the Poneke Colts beat the Wellington Axemen Colts 29-12.

At Evans Bay Park, the Hurricanes Hunters missed out 5-31 to the Blues As: