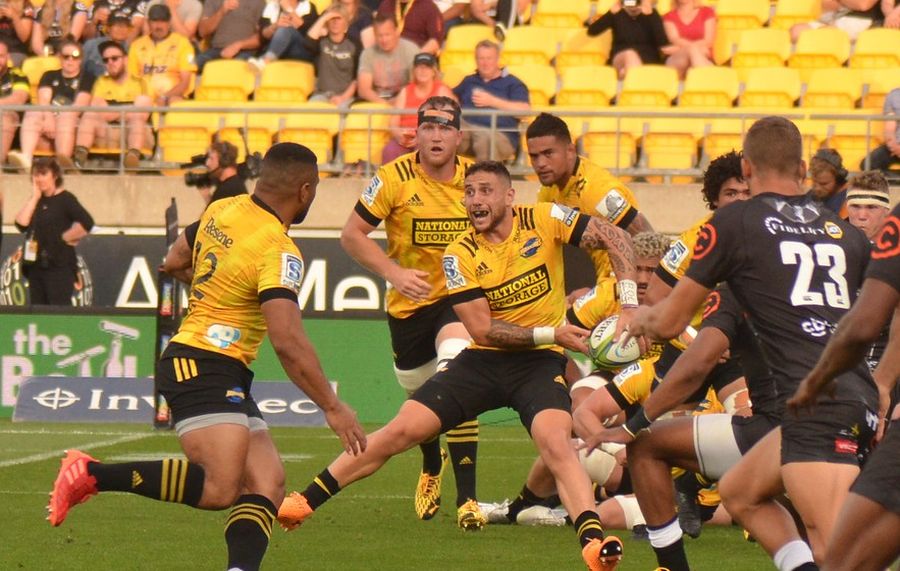 TJ Perenara – one try away from equalling Christian Cullen as the Hurricanes’ most prolific try-scorer.  See below for the team’s all time top 10 leading try scorers. Photo: Peter McDonald.

The Hurricanes have now won all four of their Super Rugby matches played against the Sunwolves.

The Hurricanes have won nine of their 12 matches played at McLean Park in Napier. This includes the last five matches in succession.

The Hurricanes scored 62 points in a Super Rugby match for the first time. They have never recorded five points in a match and the next lowest score they have yet to register is 48 points.

The Hurricanes have never before won a match by a margin of 47 points. It is their fifth highest winning margin in all matches.

The Sunwolves’ first try, scored by Mike Stolberg, was the 900th conceded by the Hurricanes in all Super Rugby matches.

The win against the Sunwolves took the Hurricanes’ match winning percentage to 57.10: this is the highest it has ever been, in 338 Super Rugby matches. The previous highest mark was 57.05 which they reached after beating the Bulls at Wellington in their 2019 quarterfinal.

Federico Anselmi of Argentina refereed a full Hurricanes match for the first time. Previously, he had replaced Nick Briant at halftime in the Hurricanes match against the Brumbies at Palmerston North on 1 March 2019.

A total of 139 different players have now made at least one appearance for the Hurricanes in a match at McLean Park in Napier.

Seven players appeared for the Hurricanes for the first time in 2020. They are: James Marshall, Ben May, Xavier Numia, Jonathan Taumateine, Chase Tiatia, Peter Umaga-Jensen and Kobus van Wyk. They took the number of players to appear in at least one match this year to 34.

Xavier Numia made his first start for the Hurricanes: in his 10th match. He is the 31st different player to start at Prop.

Jonathan Taumateine and Kobus van Wyk both made their debut playing for the Hurricanes. Taumateine had previously played for the Chiefs and van Wyk for the Stormers and Sharks. They took the number of players to make their debut in 2020 to seven and the number of players to have made at least one appearance for the Hurricanes in a Super Rugby match to 262.

Kobus van Wyk became the 23rd Hurricanes player to score at least one try on debut. He is, however, the first to score three tries. Previously Martin Leslie (against Northern Transvaal, now known as the Bulls, at New Plymouth on 16 March 1997), and Jonah Lomu (against the Sharks at Wellington on 25 February 2000).

Kobus van Wyk’s three tries are a new Hurricanes record for most tries in a match against the Sunwolves. The previous record was two: Vince Aso scored a pair in the matches played in 2017 and 2018, and Michael Fatialofa and Ardie Savea also scored two each during the 2017 match.

Chase Tiatia scored two tries for the first time and he, with van Wyk, became the 45th and 46th players to score at least two tries in a match for the Hurricanes.

Kobus van Wyk is the 35th different player to start a Super Rugby match on the Wing for the Hurricanes.

TJ Perenara scored his 55th try (in 131 appearances) and is now just one short of equalling Christian Cullen’s Hurricanes record of 56 tries, scored in 85 appearances.

Vince Aso’s try was a record fifth for the Hurricanes in matches in Napier. He previously shared the record of four

Tyrel Lomax, Asafo Aumua and Xavier Numia became the 73rd different front row combination to start a match for the Hurricanes. It is the third combination to be used in the four matches played so far in 2020.

The Hurricanes made no attempts at kicking a penalty during the match.

*Applies only to Super Rugby matches. Goosen and Laumape both also scored a try in the match against the British & Irish Lions.

Yakult Try Of The Week pic.twitter.com/TYIMiDZbL2