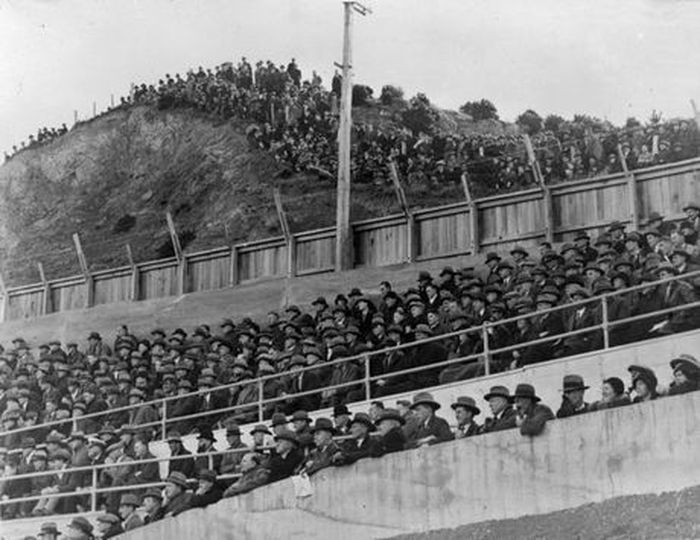 A highly competitive club rugby season, a successful representative season culminating in the return of the Ranfurly Shield and a hugely popular in-bound tour by Great Britain – 1930 remains one of the vintage seasons in Wellington rugby.

As we build up to the 2020 year in rugby, we rewind the clock to 90 years ago, and in this article look at the representative season involving Wellington and Wellington players.

The club season having wound up HERE and the Great Britain tour having concluded HERE ,Wellington’s players turned their attention to the representative season, which like now, mostly ran on after the club rugby season throughout August and September.

1930 would prove to be the first season since 1919 that Wellington had gone through without a loss, with an eight win-one draw record from their nine first-class games played. This included their 12-8 win over Great Britain in June (previous article) and their re-taking of the Ranfurly Shield in September (below).

Wellington’s record at a glance in 1930 was:

Following the win over Great Britain in early June, Wellington opened its 1930 provincial campaign in early July with victory over Taranaki at Hawera.

The Evening Post said of this game: “The Wellington back-rankers were decidedly superior and frequently set up brilliant and spectacular passing movements.”

The run of play was close. Wellington led 8-5 at halftime, before Taranaki came back to lead 14-13 with the clock winding down. In a spectacular counterattack, R. Broderick (Marist) scored his second try of the game and what was the winner under the posts. Fullback L.K. Heazlewood (Athletic) converted and fulltime was called.

The players returned to club rugby for the next six weeks, and sole-selector Norm Millard was forced to make some tough choices in his representative selections for the upcoming run of matches. In particular, there was stiff competition for spots on the three-quarter line. One example was Hutt wing Nelson Ball and University wing James Mackay forcing themselves into contention alongside Wellington Axemen’s Don Oliver who had played on the wing for the All Blacks in two of the four Great Britain tests and would go on and play centre in the big matches to come.

Wellington’s first match of the main part of their season was against Auckland. The two provinces already had a long-established rivalry and heading into this fixture they couldn’t be split having played each other 47 times for 22 wins each and three draws.

Twenty players were then selected to make the trip south to play Otago, Southland and Canterbury, with a Ranfurly Shield challenge against Southland at front of mind.

Wellington opened their South Island tour with a hard-fought 18-8 win over Otago on a wet, greasy ground at Carisbrook. Wellington dominated the scrums, “hooking the ball with monotonous regularity.” All Blacks Bert Cooke and Don Oliver in the midfield together were the best backs, while flanker Hugh McLean was the pick of the forwards.

Moving into Stags country, the home side had withstood Ranfurly Shield challenges from Wanganui (19-0), Otago (37-5) and Hawke’s Bay (9-6), and weren’t expected to give up New Zealand’s most coveted domestic rugby prize easily.

Just like against Otago, Wellington’s forwards gained parity against their well-drilled opposites, allowing their dangerous backs to get on top. In overcast, showery conditions, the backs handled well and three of their four tries were scored from clean breaks out wide.

Wellington opened the scoring with a try from a charge-down, before captain Nicholls raked off territory with a kick into the 22, from which Wellington regained possession and centre Oliver crossed for the second try. A flourishing passage of teamwork saw wing Mackay score their third try for a 9-0 lead.

Southland struck back, but Oliver scored near the corner flag again. Wellington’s fourth unconverted try put them up 12-3 at halftime. There was no further scoring in the match and Wellington had victory and the Ranfurly Shield.

On to Christchurch and Wellington out-muscled Canterbury at Lancaster Park, on another heavy track. In the curtain-raiser, Wellington’s junior representative team beat their Canterbury counterparts 13-7.

Returning home, Wellington hosted their great 1920s rivals Hawke’s Bay in a non-Ranfurly Shield defence and drew 6-6. Wing Nelson Ball scored a 30th minute try to put the home side up 3-0 at halftime. Hawke’s Bay came back to equalise and then veteran former All Blacks wing Bert Grenside scored a try for the Magpies that was seemingly the match-winner.  However Ball saved the day in the 77th minute with his second try of the match.

Next up was Wairarapa, whom Wellington was always expected to beat despite Wairarapa holding the Ranfurly Shield as recently as 1927 and almost getting it back against Canterbury and Hawke’s Bay in challenges in 1928 and 1929. Victory was achieved, although it took a late burst of scoring to balloon the final score to 42-14.

The final match of the season was the return fixture against Taranaki, who lobbied hard unsuccessfully for this to be a Ranfurly Shield challenge. In an evenly contested match, it was once again Wellington’s backs that proved the difference and they won 11-4.

In eight provincial matches in 1930, Wellington had won seven and drawn one and scored 134 points and conceded 72.

Wellington’s 1931 year wasn’t nearly as successful, with a number of retirements and transfers to other provinces. They defended the shield once against Southland (36-13) on the Stags’ return visit, but on 22 August 1931 Canterbury came to town and challenged and won 8-6. Canterbury held the Log o’ Wood for the next three seasons. Wellington fans had to wait another 22 years to get it back.

Season in review: 1930 (Part One the club rugby season)