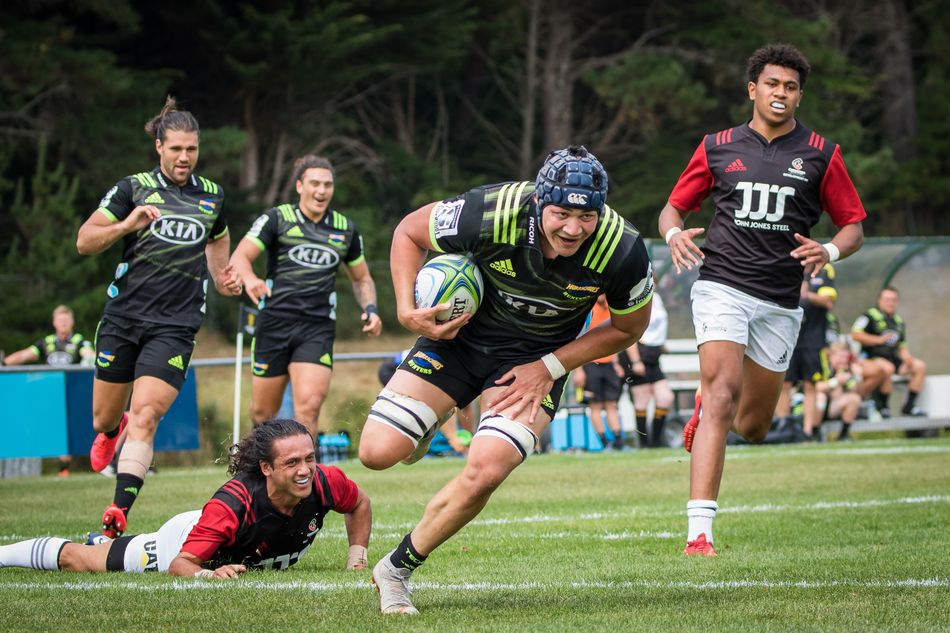 Above: Flanker Brayden Iose runs in one of the Hurricanes nine tries. PHOTO: Joe from Tackld.

The Hurricanes Hunters beat the Crusaders Development side 57-17 at a hot and sunny Porirua Park on Saturday afternoon.

The Hunters outscored their opposites nine tries to three, after leading 24-7 at halftime.

The Hurricanes Development side had side had too much X-factor for the Crusaders visitors who were competitive but more tradesman-like than threatening.

The Hurricanes made a number of breaks and turnovers that led to field position, pressure and tries. Hawke’s Bay duo Devan Flanders (No. 8) and Danny Toala (midfield) were particularly dynamic and they were directly involved in five of their tries that were scored by nine different players.

The opening 10 minute period of the contest was also the Crusaders’ best. Playing towards the clubrooms end of Jerry Collins Stadium, they hammered the Hurricanes line repeatedly and should have scored at least twice.

The Hurricanes weathered the storm and kick-started their four-try first half assault with a sizzling break by Toala from a defensive scrum position. From the next play, Marshall cross-kicked for right wing Kobus Van Wyk who collected the spoils and passed inside to centre Peter Umaga-Jensen for the first try.

The Hurricanes built multiple phases before loosehead prop Xavier Numia ran in their second try off a cheeky lineout move.

The Hurricanes were winning a steady supply of ball and competing hard at the breakdowns, leading to a ruck penalty and a kick into he corner for a lineout by Marshall. Hooker Ricky Riccitelli joined the drive from the lineout and openside flanker Southall peeled off him to score their third try. The Hurricanes led 17-0 after 30 minutes.

Workman Crusaders blindside flanker Hugh Renton poured through to win his team a penalty from the very next kick-off. They drove off a lineout in the corner and lock Antonio Shalfoon came up with their first try.

Just before halftime, Hurricanes No. 8 Devan Flanders used his brute strength to break two tackles from a standing start, wriggled through a gap in traffic and strode 20 metres to score their fourth try of the afternoon.

The Hunters were almost in again immediately after halftime when halftime Jonathan Taumateine switched play from a scrum in centre field on the 22 but a final pass transfer was knocked on near the line.

Moments later, the Hurricanes attacked from a lineout just outside the 22 and went wide where second-five Toala and blindside Brayden Iose exchanged passes and the latter burst through traffic to score. Fullback Chase Tiatia added the extras for a 31-7 lead.

This became 38-7 soon after when Toala himself jinked through the defence after yet another strong build-up.

Toala was involved yet again in the next try that put them ahead 45-7 and shut the gates on the Crusaders. After stretching them up the right hand side through Van Wyk, they swung play back and Toala put through a well-placed grubber for rep

lacement hooker James O’Reilly to follow through on and score.

Both sides made several changes off the bench and the Crusaders scored the next two tries, replacement wing Sam Gilbert breaking through in general play and then lock Sam Darry on hand out wide after a cross-kick by first five-eighth Rameka Poihipi.

The Hurricanes had the last say with a pair of tries to conclude the fixture. Replacement left wing Drew Wild scored a clinical team try off a penalty and lineout in the corner, while fullback Tiatia scored off the last play of the game which was a team breakout try from a scrum 70 metres up field.

The Hurricanes Hunters play one more game in their summer series, against the Blues A side at Evans Bay Park on 7 March. Next weekend the Hurricanes U20s play the Blues U20s in Napier and the U20s are in action again in Taupo against the Chiefs on 28 March.

The two teams were: