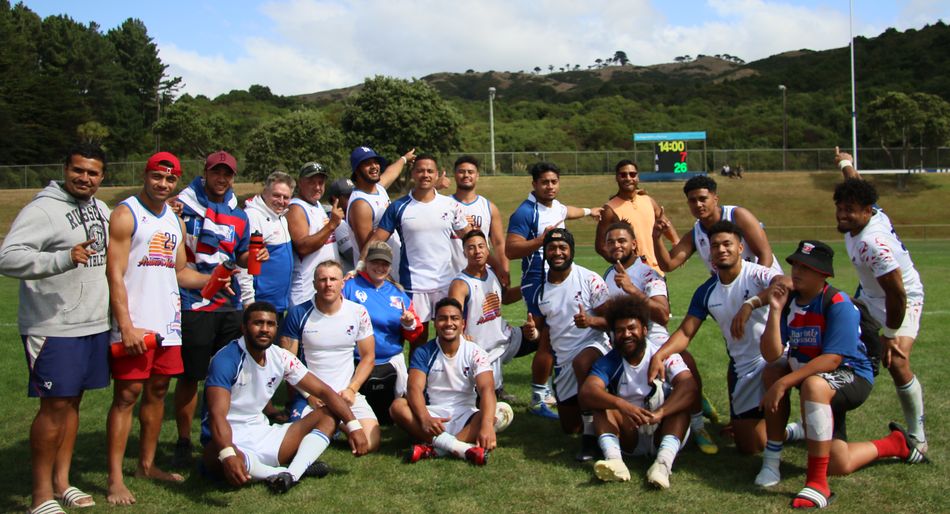 Counties Manukau club Ardmore Marist have become the ninth winner of the Middlesex County Wavell Wakefield Cup in the past 10 years.

Ardmore Marist captured the title for the second time and the first time since 1954 (Ardmore) by beating Bay of Plenty’s Te Puna 26-7 in the Cup final at Jerry Collins Stadium in Porirua.

After losing one game on day one (17-28 to Te Puna), Ardmore Marist produced a storming second day’s performance on Jerry Collins Stadium to deservedly take the spoils.

Earlier in the day, Ardmore Marist had beaten Dunedin’s Alhambra Union 29-0 in their Cup quarter-final, before beating home side and defending champions Northern United 19-10 in their semi-final.

The key play of the Cup final came three minutes into the second half. Ardmore Marist, leading 12-7, were awarded a penalty try after Sailosi Vatubua had put through a kick and chase but was tackled without the ball going for the try. This put them up 19-7, and Te Puna had a second player of the match sent to the sin-bin.

From the very next kick-off, Te Puna attempted to work the ball out of their 22 only to throw away an intercept and Ardmore Marist were in again. At 26-7 it was game over.

Ardmore Marist can also thank a couple of big defensive plays early in the final, staving off at least two clear try scoring chances. They got back on to attack and scored their first try from a 5-metre scrum. A Te Puna player was sin-binned and Ardmore Marist flung it wide to score again to go ahead 12-0.

Early in the second half, Te Puna cut through from first phase to score what was their only try of the match to make it 12-7 to Ardmore Marist. But their joy was short-lived as the game and the final slipped from their grasp.

HOBM led Massey University 12-0 at halftime and held on to win 12-10, while Ories young guns Ethan Webster-Nonu and Roderick Solo were both prominent in their side’s 21-12 win over MAC.

Marist Albion scored the opening try against Te Puna, but the latter struck twice to lead 14-12 at halftime. A second half yellow card to a Marist Albion player was a catalyst for Te Puna’s third try. They scored again late.

Home side Northern United were first to get on the scoreboard against Kaitaia City, through captain Esi Komaisavai, but Kaitaia scored a long-range try to Brady Rush. Malachai Unasa scored two more tries for Norths as they pulled ahead to win four tries to one.

Ardmore Marist had too much pace and power for Alhambra Union, with Luke Masirewa scoring a first half hat-trick. 22-0 became 29-0 when Masirewa scored his fourth try late in the contest.

Te Puna and Ardmore Marist both carried their strong form into the Cup semi-finals, Te Puna too good for Havelock North 31-5 with Etonia Waqa scoring two tries and assisting in another, and Ardmore Marist ending the Cup reign of Norths winning 19-7.

Norths scored the game’s first try against Ardmore Marist when they went wide from an attacking lineout and playmaker Esi Komaisavai offloaded to Malachai Unasa to cross out wide.

Ardmore Marist came back to score two tries before halftime to lead 12-7 at the turnaround. The Counties Manukau team maintained the pressure throughout the second half and finally flew through to score the match-winner with a couple of minutes to play.

Massey University beat MAC 17-14 in the Shield final, scoring the winning try at the end after a MAC defensive error.

Earlier, Sheridan Rangihuna had scored his second try of the match to put the Eagles up 17-12, after they had been ahead 12-5 at halftime.

HOBM had scored two tries just before halftime and a third soon after in their 19-7 Bowl semi-final win over Saracens, while Ories were electric in beating Waihi Athletic 38-5 in the other. Solo scored a hat-trick in this game for Ories.

Timuru Old Boys were deserved winners of the Plate final, after their thrilling 26-24 last-play semi-final win over Marist Albion. Timaru carried that momentum into the final to beat Alhambra Union 19-14. Timaru scored from the opening kick-off of the match and then crossed again for a 12-0 lead. The Dunedin side hit back with a long-range try but the Heartland province contenders pulled further ahead again.